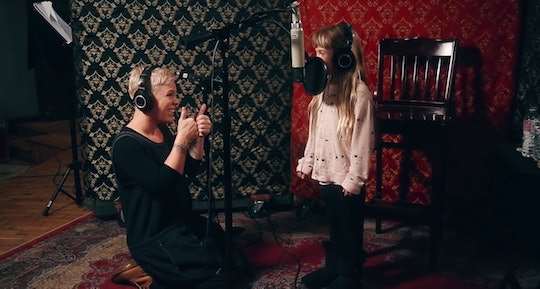 Pink Just Recorded The Sweetest, Most Heartwarming Duet With Her Daughter Willow — VIDEO

When it comes to celebrity parents, Pink definitely seems deserving of being considered total #MomGoals. In addition to being mega talented and successful, she's also a hands-on, devoted, and hard-working mama who is all about teaching her kids to march to the beat of their own drums. It's long been clear that the superstar takes her role as mom to 7-year-old Willow and 1-year-old Jameson very seriously, but a new video of Pink recording a duet with her daughter, Willow, shows that the two have a totally special and very sweet bond.

Although Willow may be more than used to seeing her famous mom in the recording studio at this point, it looks like she recently had the opportunity to join her and show off her own vocal prowess. According to PopSugar, Pink and Willow teamed up to record a version of the song "A Million Things" for the upcoming album, The Greatest Showman – Reimagined, and although Willow did a great job bravely belting out the lyrics into the microphone, the best part was seeing her do it while her incredibly proud mom stood beside her guiding and cheering her on, followed up with her enthusiastic double thumbs up at the end.

In the beginning of the clip, the mom-and-daughter duo joked back and forth about Pink "fiddling" with some musical controls before her they were set to start singing, and after cracking up at her daughter's sass, Pink told Willow, "I think you're fun," and added, "I'm glad I had you."

The moment was likely a testament to why her 7-year-old didn't seem at all intimidated by the notion of singing solo in a professional recording studio filled with grown-ups. Whether it be supporting her daughter's desire to dye her hair purple, according to People, giving a badass speech at the VMAs about not giving into other people's beauty standards, or discussing her desire to raise her kids in as gender-neutral an environment as possible, Pink has repeatedly shown the world that she's totally on her daughter's side, and that she always will be.

In fact, Pink even told Redbook earlier this year that, she'll happily give up her successful touring career if her children want her to stop, saying:

I asked if [Willow] wanted to [go on tour], because we make family decisions. When touring stops working for the kids, if they decide they just want to be home and have a normal life, whatever that means, I'll stop, because they are by far the priority. But I think it's cool that they get to see their mom be the boss and work really freaking hard to realize a dream.

It sounds like this most recent project and sweet video was about more than just having a chance to let Willow have her own moment in the spotlight though: in the clip, Pink explained that the experience reminded her of her own love for the Annie soundtrack growing up, and how much that meant to so many kids like her. According to E! News, she said:

I grew up listening to Annie, and no one has done this for me, for my heart since I was a little girl. And to have her finally have something like this ... You made our favorite movie ever.

But while this might be the first time that Pink and Willow have had the chance to work together on a song, it seems like Willow has long been a fan of her mom's music, as well as of watching her perform. When she joined her parents at the 2017 MTV Video Music Awards, for example (in a matching suit, no less), fans on Twitter couldn't help but gush over a clip of Willow and her dad, Carey Hart, singing along during Pink's performance.

It's not clear if Willow intends to follow along her in famous mom's footsteps and become a musician, but if she does, it looks like she's off to a pretty solid start. And either way, it definitely seems safe to assume that, regardless of what she ends up deciding to do with her life, Pink will be in her corner the whole way.