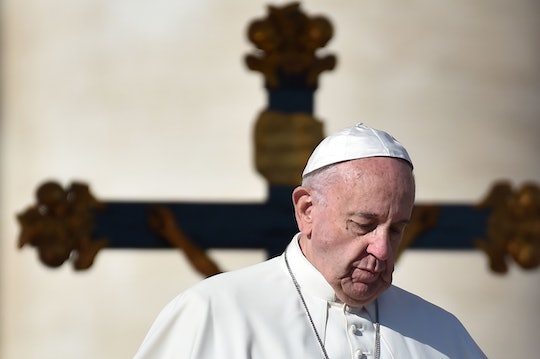 In a move that's in line with his apparent mission to foster a more inclusive Catholic Church, Pope Francis announced Monday that he would extend the ability of priests worldwide to forgive those who have abortions. Even though the church still considers either procuring an abortion or being involved in performing one to be a "moral evil," this somewhat more progressive pope said he recognizes that it's often an "agonizing and painful" decision (which is only sometimes true) that should no longer be punishable by excommunication. This by no means indicates that the Catholic Church supports a woman's right to choose, but Pope Francis' declaration on abortion is a big deal because it's about as far as he could go while still being a figurehead of the church.

For many non-Catholic or non-religious people, the idea that a woman must be "forgiven" by a man — because priests are always men— for exercising her own bodily autonomy and accessing a safe and legal medical procedure is a hard one to accept. But coming from an institution with the core belief that every life "from the moment of conception until death is sacred," according to CNN, any relaxation of the rules is a giant concession. And a concession that shows that the man in charge truly is working to ease the relentless guilt factor associated with abortion (or anything associated with a women as sexual beings), and to make the church a safer and more welcoming space for women within the confines of its ancient, conservative dogma.

The pope made this pronouncement for the first time in late last year, authorizing priests all over the world to absolve women and abortion providers for their "sin," instead of the church's previous approach of automatic excommunication that could be reversed only by a bishop or a "designated special confessor," Religion News Service reported. The change was meant, at the time, to last throughout the special "Holy Year of Mercy" from Dec. 8, 2015, to Nov. 20, 2016. Upon its expiration, Pope Francis renewed the change to endure in perpetuity beyond the few nations like the United States and Britain where it was already the norm.

In the apostolic letter detailing the decree, though, the pope maintained that this does not mean that the church's position on abortion itself has changed — at all, as CNN reported:

I wish to restate as firmly as I can that abortion is a grave sin, since it puts an end to an innocent life. In the same way, however, I can and must state that there is no sin that God's mercy cannot reach and wipe away when it finds a repentant heart seeking to be reconciled with the Father.

Although this doesn't change the way churches in the United States operate, it's a powerful statement at a time when Donald Trump and his vice president Mike Pence prepare to take over the Oval Office, having made clear that they intend to work to severely limit or even abolish abortion access. Unlike the issue of same-sex marriage, which has steadily gained public support and is now recognized in all 50 states, abortion remains as polarizing a flashpoint as ever, and often carries a taboo reserved for only the most shameful of acts.

So for the Catholic Church, one of the most stalwart opponents of abortion rights, to shift just a little can only help to reverse that stigma, if only imperceptibly. Pope Francis could not have lifted the church's staunch position on the issue without incurring the wrath of millions of believers and church leaders throughout the globe, and there's no reason to think he even wanted to.

But just as he bowed to permit Catholics to use contraception to avoid pregnancy when they're under threat of contracting the birth defect-inducing Zika virus and encouraged acceptance of all families (while still refusing to recognize same-sex marriages within the church), the pope is slowly nudging the church toward a more loving ideal that it so often claims to embody.