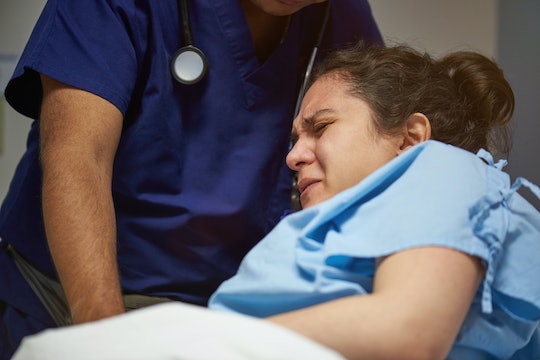 As I hobbled through our two-story house hours after the birth of my second child, I couldn't help but think of the injuries I sustained after my first birth. The pain was otherworldly, recovery was difficult, my support system was lacking, and I felt utterly alone. So when I was staring another postpartum period in the face, I was less than hopeful. I mean, can we please start taking postpartum pain seriously so new moms aren't wandering their homes in pain, feeling lonely, isolated, and discounted? This shouldn't be our foray into new motherhood. This shouldn't be how motherhood is at all.

According to a survey of 2,400 women, conducted by Harris Interactive and the W.K. Kellogg Foundation, 58 percent of women who had C-sections viewed the pain at their incision site to be problematic a whole two months after birth, as did 41 percent of women who had vaginal births experiencing perineal pain. A reported 13 percent of the participants were hospitalized since giving birth due to birth-related pain, and 55 percent of moms said that "pain interfered at least a little bit in their routine activities."

Becoming a mom doesn't mean our voices no longer matter, or that our pain is no longer real.

Another study of 1,500 mothers published in PLOS One found that 77 percent of moms reported continued back pains, and 49 percent reported urinary incontinence, a whole year after giving birth. This doesn't even cover pain during postpartum sex, either — something 24 percent of women experience a year after delivery — or those who've suffered pubic bone fractures or pelvic floor muscle tears during labor and delivery. So not only is postpartum pain incredibly common, regardless of how you gave birth, but it is often debilitating and even serious enough to require medical attention.

I was holding my 2-week-old son when I realized the excruciating pain I had been feeling since childbirth wasn't going away but was, in fact, getting worse. It became so intense, in fact, that I reluctantly made an appointment to see my doctor. It turns out I had torn my stitches and, as a result, had contracted an infection. Just like I had inadvertently did after my daughter was born.

If we, as a culture, continue to diminish women's pain and make jokes about anything related to our reproductive health and wellness, we're never going to receive the care we need.

I knew exactly how I sustained the specific injury, too. When the laundry overflowed, I did it. When the refrigerator was empty, I shopped and filled it. When our two-story house needed vacuuming, I was the one who cleaned those carpets. Because women are supposed to just "deal with" postpartum pain, and because postpartum pain isn't taken seriously, it was assumed that I would pick up right where I left off. I had a passive partner who worked long hours, so I had to figure out a new life with two children all on my own. As a result, I made everything worse by not giving myself time to heal.

Anytime I complained about my pain or tried to voice my concerns, I was dismissed and my symptoms were considered "normal" and "to be expected." In other words, no one took my pain seriously. "It'll pass" they said. "It's normal," they told me. "Give it time," they sighed. It's as if my words carried no weight. It was like my pain was a figment of my imagination to everyone... except me.

Without a solid support system, both physically and emotionally, us new moms are never going to heal from something as traumatic and awe-inspiring as childbirth. If we, as a culture, continue to diminish women's pain and make jokes about anything related to our reproductive health and wellness, we're never going to receive the care we need.

Becoming a mom doesn't mean our voices no longer matter, or that our pain is no longer real. We matter, our pain matters, and our need for support is just as vital as ever.