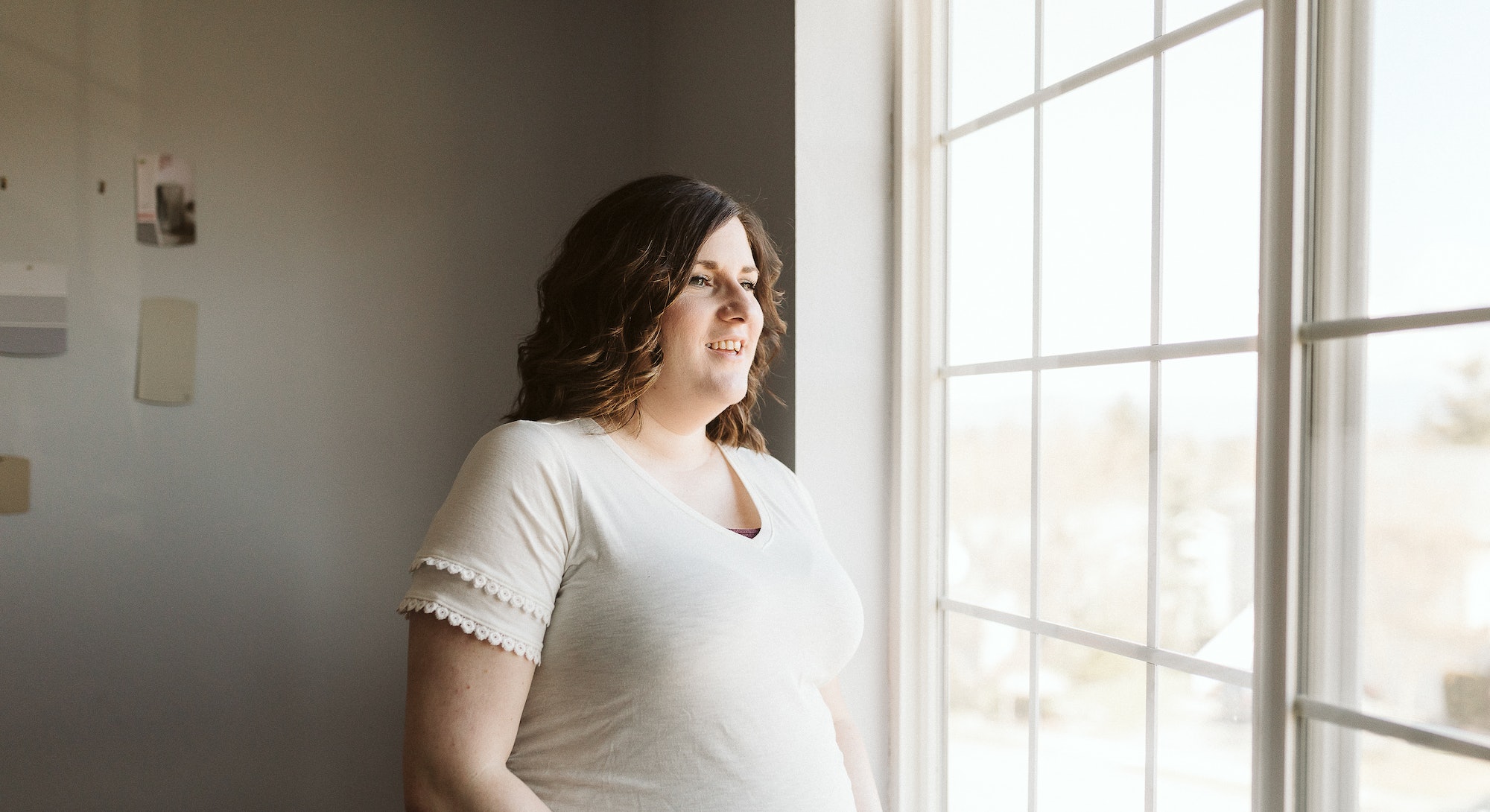 Pregnancy Was Almost The Last Thing She Expected

Jessie Glockling has just discussed with her OB-GYN the possibility of starting on Diclegis, an FDA-approved prescription medicine to treat severe morning sickness. Nearly 25 weeks along, Glockling says that the truly miserable part of pregnancy is “still here and very present.” But, she tells me via phone, her discomfort is not something she feels like she should really dwell on. After all, “We did try for so long.”

Glockling — whose journey to the point of looking forward to a due date this summer took a torturously long time thanks to polycystic ovarian syndrome (PCOS), and involved amenorrhea (a loss of menstruation) lasting over a year and a host of pharmaceuticals, starting with medroxyprogesterone to treat the amenorrhea, and then moving on to multiple rounds of clomid and metformin and several rounds of letrozole, plus a “trigger shot” of HCG — is careful to emphasize that she didn’t have “unrealistic” expectations about carrying a baby to term.

“I'm not new to the fact that pregnancy, you know, isn't a walk in the park,” she says. “But I think that I didn't expect it to be quite like this.”

This ambivalence over whether or not it’s OK to voice feelings of discomfort and even unhappiness (“It’s not the best,” is how she described her sickness, and as someone who can vividly remember how horrible I felt every day for just a few weeks during my first trimester over 16 years ago, I know what an understatement this is), given how difficult the road to a viable pregnancy has been, is something that Glockling has in common with all of her fellow Tryers, each of whom chronicled their experience trying to conceive for a year for Romper’s Trying project.

“Des has also had kind of a rough time,” Glockling tells me of Dese’Rae, another Tryer. “She was kind of struggling too, and getting pretty sick. And she had to take Diclegis. And she was saying, you know, ‘I don't want to seem ungrateful.’”

She repeats a refrain that both she and Des shared, that so many people in similar situations can relate to: “I feel like I'm not allowed to feel this way, but I feel this way."

“I feel like I’m not supposed to feel this way and not be like, 'God, this sucks,’ she says. “But it does! That's the reality of it, it does.” Still, Glockling is quick to add, “We're still really excited and really happy.”

Staying in touch with her four fellow Tryers has been a special part of this year-long process, Glockling says. But, it also eventually turned into a source of what she describes as “pressure,” as she learned first of Ambreia’s good news, and then Alyssa’s, and then Des’.

"OK, so this is three out of five now," she thought to herself, and she began to feel the pressure rise. “But not negatively — it wasn't like I felt any negative feelings about it. But I just kind of felt like, ‘OK, well now I'm one of two left. And what if we don't get pregnant? Or what if just I don't? Or what if just she doesn't? What's that going to look like?’"

Amazingly, as we reached the year mark of Tryers, all five women have either given birth or, like Glockling, are expecting — Jackie was the last to share her own news: that she and her husband are preparing to welcome triplets.

“I was just hoping and praying every day like, ‘Please, please let Jackie get pregnant so that we can all complete this together,’" Glockling says. “I think that would be really hard if ... one of us didn't get pregnant. I would hate for that to have happened.”

When it came to sharing her own news with the world, including the community she’s developed over the past year as readers experiencing similar struggles have reached out to her on Facebook and Instagram, Glockling thought long and hard about how to do it. One of her most-read — and widely shared — Trying entries detailed how she unfriended someone on Facebook after seeing their pregnancy announcement. Glockling wrote:

Hours before the announcement showed up on my social media news feed, I was still processing the highly anticipated results I had just received from my blood work. Not pregnant.

… After all of the times I had pushed my feelings down deep inside and smiled genuinely at someone and wished them well at the news of their expanding family, I couldn’t do it this time. Negativity swirled deep inside of the pit of my stomach, and I wasn’t sure which felt worse: the news that I wouldn’t be holding my own baby any time soon, or that yet another person on social media seemed to have unlocked that badge with seemingly the greatest of ease.

When it came time to share her own pregnancy news, Glockling and her husband first told their family and some close friends, choosing to do so at a very early stage, over Christmas. “I was really, really nervous about it,” she says, “but I kind of figured that I would tell them anyway if something [did go] wrong, so I was kind of hoping that if [that happened] they would be there, and I would have that support right up front.”

And then, the public announcement at 12 weeks, on Instagram and Facebook with a picture of their sonogram and their dog. (“Wilson is like our first child, we're very, very attached to him.”) Announcing a pregnancy is always going to be a touchy, she acknowledges, and writing, sharing, and receiving feedback on her article changed the way she thought about it a lot. “It made me a little bit more hesitant to share my own news.”

“When you've been going through this journey of your own, it can be hard to kind of work out those feelings.” Glockling says. She wanted to be mindful of that, wondering, "Well how do I go about this? What is the way to do this without hurting anybody's feelings or upsetting anybody?"

Glockling first shared her news privately with people she thought might be sensitive to it, but over all, with her social media posts, she hoped that the community of people she had built around her would understand and be happy for her.

“I've kept up with their stories,” Glockling says of the people she’s connected with over this past year, either because they’ve reached out to her after reading an entry on Romper, or been connected to her via mutual friends. “I've never met them, but I keep up with them and follow them,” she says. “Some of them are doing IVF. Some of them are not quite there. It's been really cool to see everybody else's journey, too.”

“I think it made it a lot more special, when we did get pregnant, sharing it with everybody,” she tells me. “I mean, I had strangers reaching out to us … and people on Facebook and Instagram that I haven't talked to in years reaching out to me to give congratulations, and saying when they saw it, they were crying, and they were just so happy.”

Later, Glockling emailed to say she regrets not adding a trigger warning to her announcement.

"I also hope that if there is someone struggling and reading my story and feeling upset or having bad feelings about any of our updates on pregnancy that they would do as I did, and unfollow or remove me or anyone for a bit as a means of self-care,” she wrote. “I would certainly understand that, because I’ve been there, and this is such a hard and emotional process, and sometimes you have to focus on yourself.”

Not only was I feeling depressed and hopeless, but I felt like less of a person in some way.

For Glockling, who for her first year of trying didn’t want to tell anyone what she was going through, this year of writing about and publicly sharing her experience has been a way to release some of the pain. “I'm glad that I did it, and I'm glad that I took that step, because it's not easy. The stuff that we write about, it can seem like it comes naturally to us, writing about it or sharing about it, but it's actually really hard to put it into words.”

Writing helped Glockling process her feelings, she tells me, a change from the months she spent suffering in silence. “For the first year of my infertility, I did not want anyone to know about my struggles,” she explained in her fifth Trying diary entry. “Not only was I feeling depressed and hopeless, but I felt like less of a person in some way. As if not being able to carry out this basic biological function meant I was not a whole person worthy of love. Keeping all of it inside only served to further aggravate the wound and isolate me from people in my life.”

When she heard about Romper’s Trying project through a Facebook post in early 2018 (Glockling is a friend of Romper editor Danielle Campoamor), something appealed to her. “I just kind of felt like it was the time,” she says. And when she realized she’d be sharing this public journey with four other women, what’s when she thought, "OK, I can do this. I'm not doing this alone. There are other people sharing their story, and it's just as personal and might be a good way to release some of this … pain, and the feelings of frustration.”

Certain experiences have been easier to write about than others, but only once she got that positive pregnancy test did Glockling have doubts. “Once we got pregnant was probably the only point I regretted [taking part in the Tryers project], because then, I had to write about it,” she says. “I am a very superstitious person. I was just like, ‘Oh my God, but what if I write about it … and then, what if something happens?’ Because you're just in that weird space where you're like, I want to share this, but also I don't know how I'm going to feel if something goes wrong.”

But she never considered quitting the project. “It was important to me to finish that out, and see that through, and just try and be as honest about it as I possibly could,” she tells me. “I didn't want to be like, ‘Wow, now we're pregnant, and everything is great, and everything is roses, and all of our dreams were fulfilled,’ you know?”