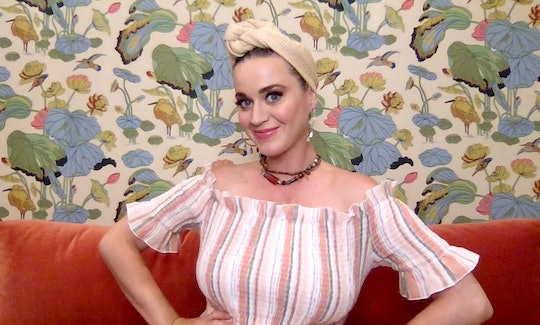 She's just weeks away from her due date, but that's certainly not stopping a very pregnant Katy Perry from rocking a crop top and looking absolutely amazing doing it.

Earlier this week, the "Daisies" singer shared a photo of herself posing in a cropped white long-sleeved t-shirt bearing the title of her upcoming album, Smile, with her pregnancy bump on full display. Perry also modeled a Smile hat and mask from her album's merchandise in following photos.

"Never too pregnant for a crop and never too good for a mask," the 35-year-old singer captioned her Instagram post.

And Perry's fans certainly seem to agree. "Yesssss Momma!" one follower commented on her post, while another wrote, "Awwwwww baby belly!"

Perry, who announced that she's expecting her first child, a baby girl, with her fiancé Orlando Bloom in early March, is quickly nearing her due date. Shortly after she announced her pregnancy news, Perry also revealed that she's due with her first child sometime this summer. "There's a lot that will be happening this summer, not only will I be giving birth, literally, but also figuratively to something you guys have been waiting for," she said during an Instagram Live video in March. "Let's just call it a double whammy. It's a two-for."

While she has not shared her specific due date with the rest of the world, Perry said in an interview with Howard Stern on July 21, that the baby is coming "soon." The expectant mom also said that she is very ready for her daughter's impending arrival after having an "easy" pregnancy. "I'm not anxious at all," she said. "I feel super blessed. I've had a really easy one, physically. I'm very active. I'm a mom on the move, as they say."

As the world waits for Perry and Bloom's little girl to arrive, they can match Perry by purchasing the same long sleeved crop top on her website for $40. The shirt also comes with a link to download Perry's album, which will be released on Friday, Aug. 14.