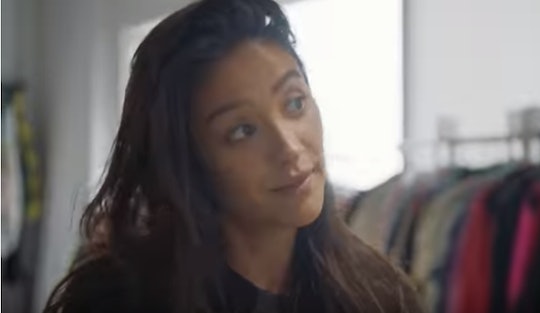 Not everyone out there wants to talk about some of the less glamorous elements of pregnancy, perhaps especially when that person has a massive social media following. Shay Mitchell has more than 25 million Instagram followers who show up to scroll through photos of her gorgeous holidays, watching her saunter her way places like through Ibiza, Barcelona, and Bali looking impossibly cool in a big hat, cute bump, and bikini. But that apparently doesn't mean she's above sharing the less palatable side of her life right now. In fact, Shay Mitchell recently revealed she had to "wear a diaper" in a recent YouTube episode for a surprising but totally relatable reason.

The Pretty Little Liars star is expecting her first child with boyfriend of two years, music manager Matte Babel, according to Elle. Mitchell has been celebrating her pregnancy all over social media since she first announced she was expecting back in June with a gorgeous photo of her bump and the caption, "Does this mean I drive in the car pool lane at all times now?" See what I mean? She exudes effortless cool. Which is why it might come as a surprise to some people that she apparently decided to start wearing a diaper these days because she's peeing just all the time.

Mitchell released the second episode of her new YouTube channel Almost There on Wednesday with the compelling title "Why I had to wear a diaper!!"

As Mitchell explains in the video, her body has gone through some pretty interesting transformations during her pregnancy with her daughter. "Honestly, guys, I’ve never known that somebody could pee as much as you do when you’re pregnant," she says. "I swear to God, in like a half an hour, I went to the bathroom probably about 22 times last night, to the point where I was like, I’m f-ing wearing diapers."

She went on to actually show everyone the diaper she was wearing on the set of her new show Dollface, then pointed out that this was not an "ad for Depends," which was probably my favorite part.

For those of you who haven't been pregnant, please know that having to pee a whole lot is definitely one of the side effects, according to Today's Parent. I am actually sort of jealous that I never thought of Mitchell's innovative solution during my pregnancies, but I also wasn't filming a television show. As the You star pointed out in her video, "[the] set was way over here, the bathrooms were way over there... I was having to pee way too much, I'm over the back and forth."

There is a definite trend among pregnant celebrities to keep it real. Instead of trying to project an image of perfection, people like Chrissy Teigen and Jessica Simpson have instead opted for connecting with their followers through (sometimes brutal) honesty. If keeping it real during pregnancy has become fashionable, Shay Mitchell has just become the most on trend pregnant woman in Hollywood. And she's done it while happily peeing her pants, so there.

More Like This
Kelly Osbourne Reveals She's Pregnant With Her First Child & Can't Wait To Be A "Mumma"
Rihanna & Her Baby Bump Were Transformed Into A Piece Of Art For The Met Gala
90 Day Fiancé Stars Loren & Alexei Brovarnik Announce They’re Expecting Baby #3
Are Movie Theaters Too Loud For Pregnant People? OB-GYNs Explain