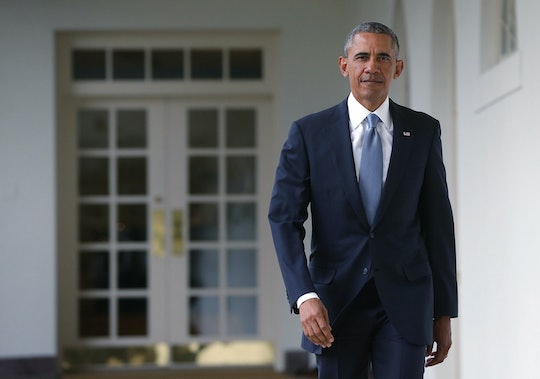 Tuesday evening, the U.S. will be tuned into President Barack Obama's final State of the Union address, and there's been much ado about what topics he'll cover in his speech. If Obama's previous SOTU addresses have been any marker — and with this one being his last — Obama will likely delve into the issues he has tackled during his eight years in power. However, in a video preview posted by the White House, Obama said he wants to focus on "not just the remarkable progress we've made, not just what I want to get done in the year ahead, but what we all need to do together in the years to come." This all sounds nice, but there a few things Obama needs to address that remain unresolved from past SOTU addresses, like how to permanently shut Guantanamo Bay, and where the U.S. stands in regards to ISIS.

In the video, Obama also said, "Since I took office seven years ago, in the midst of crisis, I don't think I have ever been more optimistic about a year ahead than I am right now." That's a good thing — a president's final year can be one of his most impactful ones. Ronald Reagan convinced the Senate to sign off on a nuclear arms treaty with the Soviet Union; Bill Clinton instated executive orders to protect wildlife lands and signed a game-changing trade deal with China; and George W. Bush (despite his failures) managed to push a huge bailout of the financial industry with the Troubled Asset Relief Program.

Obama has done some great things for the United States during his eight years, and by all means, it's good to remember them. But there's a few things he should definitely address in his last State of the Union, and they're more related to looking forward than remembering the past.

In 2013, he signed off on 23 executive actions that toughened up existing laws and encouraged more communication between federal and state agencies, according to the New York Times. Then, just this year, he issued 10 more executive actions, cracking down on mandatory background checks, according to Forbes. But here's to hoping that in his final SOTU, Obama brings up gun control again. Congress and gun lobbyists have defied Obama's attempts to pass meaningful legislation on gun control, and opponents have criticized him heavily. Obama introduced another executive action on gun control last week, which focuses on increasing background checks, using technology to make guns safer, and increasing access to mental healthcare, according to Forbes. Still, many critics have said these changes only reinforce exiting laws and don't actually meaningfully change gun laws.

To lower gun violence in the United States, serious changes need to be made around gun control. Keep educating the masses, Obama.

He Needs To Detail His Plan For (Finally) Closing Guantanamo Bay

Eight years was a long time ago now, but Americans haven't forgotten Obama's promise to close Guantanamo Bay. The naval base, which opened in response to the Sept. 11 terror attacks, came under fire after the world learned about the alleged barbaric practices at the detention camp, including waterboarding, sleep deprivation, and other forms of torture.

On Monday, Guantanamo Bay turned 16 years old, despite the fact that Obama signed an executive order in 2009 for the camp to be closed by February of the following year. According to The Independent, there are still 103 prisoners at Guantanamo Bay, but White House Chief of Staff Denis McDonough said Obama would close Guantanamo Bay before leaving office. After seven years, a few people might, understandably, be skeptical — and I'd love to hear Obama's plan of attack for closing the facility mentioned in his final SOTU.

He Needs To Address ISIS, Syria, Iraq, and Afghanistan

A Syrian refugee who was featured on Humans of New York, scientist Abu Ammar, has been invited to join the First Lady for the State of the Union address. Obama has shown his dedication to accepting Syrian refugees and combatting the illogical fear that has spread to many states looking to ban refugees. However, ISIS has muddled the waters when it comes to dealing with Syria and Iraq. In 2012, Obama threatened force against Syrian President Bashar al-Assad's brutal regime, but the focus now has been on dismantling ISIS.

Obama has also had to compromise his commitment to removing all American soldiers from Iraq and Afghanistan in order to fight the Taliban and ISIS. The United States — not to mention Obama — is not looking for another long, drawn-out war, but he can't ignore an abusive government and terrorism, either. It'd be good to hear more about his plans for dealing with al-Assad, the 10,000 American soldiers that remain in Afghanistan, ISIS, and the Taliban.

He Should Kick Things Up A Notch With Higher Education Costs

In his 2015 SOTU address, Obama said he wanted to spend $60 billion over the next decade to make community college free for many students. However — once again — he's run into issues with Congress. CNBC reported that college and university costs have only continued to rise, and many are now wondering: is a degree actually worth the cost involved?

A healthy education system is vital to a developed nation, and prohibitive costs won't spell anything good for future generations. With fears of terrorism and talk about Obamacare likely to be addressed, it's important to remember this is a topic that needs to be talked about.