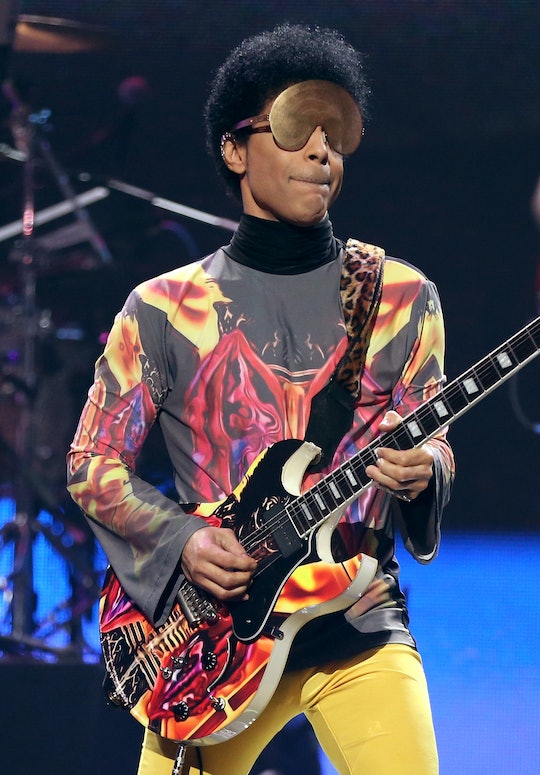 This morning, after a modest breakfast and a necessary coffee, I learned that music icon, legend and pioneer, Prince, had died at 57 in his Minneapolis home. The feelings of grief for a man I had never met, but felt inexplicably connected to, mirrored the feelings I endured when I heard that David Bowie had died earlier this year, and the weight of these two collective losses became nothing short of unbearable.

Say what you will about celebrity deaths and how society, as a whole, responds to them. Some are quick to mock the sadness and sympathy and empathy expressed online or otherwise, but when you've been altered, felt touched by, and feel undeniably connected to someone through their music, you cannot help but feel like an old friend has died. For me, that's what Bowie and and now Prince's deaths, feel like: two friends who told me everything was going to be OK (when it wasn't) with intoxicating melodies and simplistic words, deciding to leave this world in search for another. In doing so, they left me and thousands of others behind.

If being a man meant adhering to social stereotypes of "toughness" or "masculinity," then Bowie and Prince were so much more than men. In fact, they were not of this world.

Bowie and Prince were pivotal to the music community, then and now and arguably will be for countless years to come. The two stage-slaying, androgynous, sexy demigods gave the world a kick in its binary gender-identifying face, reminding us all that there is no one way to be a man, or a person for that matter. They broke boundaries and redefined sexuality and made no apologies for who they were, what they looked like, how they felt, or what they said. They gave us many, many things, but if I had to choose one word to tuck the rest of their teachings into, it'd be this: David Bowie and Prince gave us freedom. To be ourselves. To be more than ourselves. If being a man meant adhering to social stereotypes of "toughness" or "masculinity," then Bowie and Prince were so much more than men. In fact, they were not of this world.

They were both too great for just one name, and sometimes, any name at all. We couldn't confine their iconic uniqueness or creative savvy to one identifiable word, so we used many: Thin White Duke, Ziggy Stardust, The Purple One, and an unpronounceable syllable that forced us all to say, "The Artist Formally Known As." They transcended the music world and dipped their toes in Hollywood, both staring in movies like Purple Rain and Labyrinth. Call it strategic career moves, call it shameless self-promotion; I call it boundless talent, that gave us a number of cult classics that will now be watched out of sincere reverence, and not just shameless joy.

They whispered through the speakers of my childhood home during some horrific, painful moments of domestic violence, and reminded me that it gets better. They gave me an escape, with fine-tuned melodies and perfectly-timed words, on days when the walls seemed dangerously close to caving in.

They were both successful enough for us all to appreciate their genius, long before days like today, when news of their deaths arrived. Although sometimes our culture needs a few years of mourning and loss to appreciate true talent, we all knew — at the height of their respective careers — that we were simply not worthy of their presence. Perhaps that's why their deaths don't feel like actual endings, but more like two beams of magic and light being called home to another world or universe or galaxy, to make music we either weren't prepared for, or didn't deserve. Bowie was nominated for 12 Grammys, winning two — including a Lifetime Achievement Award. Prince was nominated for an incredible 32 Grammys, according to JustJared.com, winning seven. So even though they may not have been long for this world, they are two men who made the most of it.

But more than that, what Prince and Bowie were both capable of doing seamlessly, was affect their listeners in a way few artists can. They told people who felt different that they weren't alone. They told men that it was OK to be feminine; that it's strong and sexy and empowering. They told women that you don't have to be attracted to just masculine men; boys who wear makeup are hot as hell too. And, for me, they whispered through the speakers of my childhood home during some horrific, painful moments of domestic violence, and reminded me that it gets better. They gave me an escape, with fine-tuned melodies and perfectly-timed words, on days when the walls seemed dangerously close to caving in.

That's why, for me and countless Bowie and Prince fans, we feel like we've lost nothing but close friends in 2016. That's why we're also convinced that they're not gone, they're just sitting in a tin can, under the purple rain, making new music and reminding us that you don't have to conform to this world to be a life-changing part of it.