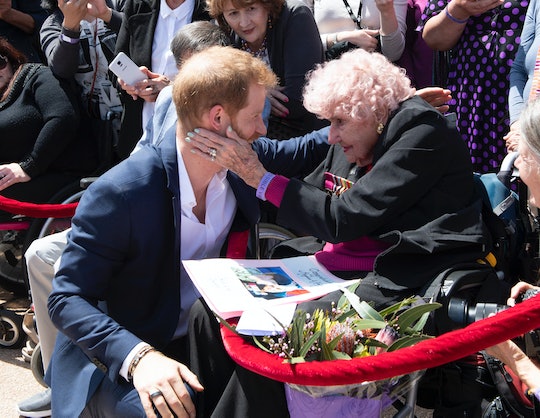 Prince Harry is a loyal man. Not just to his family and his wife Meghan Markle, but also to those especially devoted fans of his. One in particular, if we're being honest. The Duke of Sussex and Daphne Dunne of Australia have had a sort of mutual admiration society going for a long time... and despite the fact that the prince is incredibly busy right now, he and his wife have not forgotten her. Prince Harry and Meghan Markle surprised their 99-year-old fan in the sweetest way. Because loyalty really matters even when you're royalty.

Daphne Dunne just celebrated her 99th birthday, and now everyone just pause and take a moment to realize the enormity of celebrating such a milestone. She has been on the planet for nearly 100 years. While Dunne might have thought it was pretty significant, she didn't expect any sort of recognition from a member of the royal family. Even if that member, Prince Harry, has a history of making time for a woman who considers herself his biggest fan. Every time Prince Harry visits Australia, Dunne (who is a war widow, as per People) is sure to be on hand to greet him. But that didn't mean she expected him to notice her birthday, as she told Australia's Today Show; "He wouldn't even think of it."

She was wrong about that one. Not only did Prince Harry think of it, so did Meghan Markle.

It seems that a friend of Prince Harry's caught wind of Dunne's birthday and sent him an email to let him know it was coming up. People reports that Prince Harry replied overnight (how much do you love him?) with a special message for his surprised fan. She was told about the personal birthday message from the Duke and Duchess of Sussex by the host of the Today Show while she lay in a hospital bed surrounded by balloons... and she was clearly overjoyed.

As per Harper's Bazaar, the letter from read:

My wife and I send our warmest wishes to you on the occasion of your 99th birthday on Friday. We hope that you have a wonderful celebration surrounded by family and friends, and that you’ve managed to escape the hospital. Congratulations on reaching this important and impressive milestone before your centenary year next year. Happy birthday, Daphne.

Harry and Meghan, the Duke and Duchess of Sussex

It was a lovely surprise for a woman who has shown up for Prince Harry every time he has landed in Australia, rain or shine. The pair first met at the Sydney Opera House in May 2015, as per The Telegraph, then again in 2017 when she waited for him for hours in the rain. He recognized her right away, even after two years.

Finally, the pair were reunited in 2018 when Prince Harry was able to introduce her to his new wife, Meghan Markle, when the two were visiting the Sydney Opera House, as per Harper's Bazaar. Full circle.

It's a pretty wondrous thing, for a man as famous as Prince Harry to remember one of his fans. But then again, we're all looking for human connection, aren't we? And Daphne Dunne has obviously established a real connection with the prince.