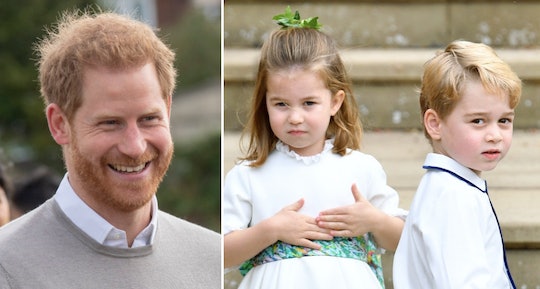 The Duke of Sussex and his own family might be living on the other side of the world these days, but there was a time when Prince Harry once gave Prince George and Princess Charlotte some very uncle-like presents.

Finding Freedom, a new book about Prince Harry and Meghan Markle's journey as a couple written by royal reporters Omid Scobie and Carolyn Durand, is set to be released on Aug. 11, but a few anecdotes from the biography have already been released. For example, as Vanity Fair report, the book shares details about the early days of their romance, when Markle was an actress in Canada working on the show Suits and Prince Harry was arguably one of the most recognizable bachelors in the world.

The book also shares some details about the couple's personal relationship with Prince Harry's brother Prince William and his family. While much has been written about the supposed animosity between the Sussexes and the Cambridge family, particularly since Prince Harry and Markle stepped away from their senior royal roles in January, this book will apparently offer insight into some more tender moments as well.

For instance, according to Marie Claire, Prince Harry is apparently pretty great at buying gifts for his 7-year-old nephew Prince George and 5-year-old niece Princess Charlotte. In 2017, as the magazine reported, when the Duke of Sussex was still living in the United Kingdom close to his brother and sister-in-law Kate Middleton on the grounds of Kensington Palace, he reportedly bought Prince George an electric SUV and Princess Charlotte a tricycle.

Now, it should be noted that Markle and Prince Harry shared a statement about the book Finding Freedom where they denied any involvement in the process. "The Duke and Duchess of Sussex were not interviewed and did not contribute to Finding Freedom. This book is based on the authors’ own experiences as members of the royal press corps and their own independent reporting," a representative for the couple told People.

Still, it does not seem outside the realm of possibility that Prince Harry would buy nice gifts for his nephew and niece. He has also reportedly bought nice gifts for his youngest nephew, 2-year-old Prince Louis, including a fancy first edition copy of A.A. Milne's Winnie-The-Pooh book, according to The Daily Express.

As for Prince Harry and Markle's 1-year-old son Archie, it seems there were high hopes that he would grow to be best friends with his cousins, according to Town & Country. The biography claims, as Town & Country cites, Prince Harry reportedly told a friend before becoming a father that he "had an image of getting married and spending time with William and Kate, the two couples together, their children best friends."

While that might be difficult right now during a pandemic, especially since the Cambridge kids live in the United Kingdom and little Archie lives in Los Angeles, it might happen someday down the road.