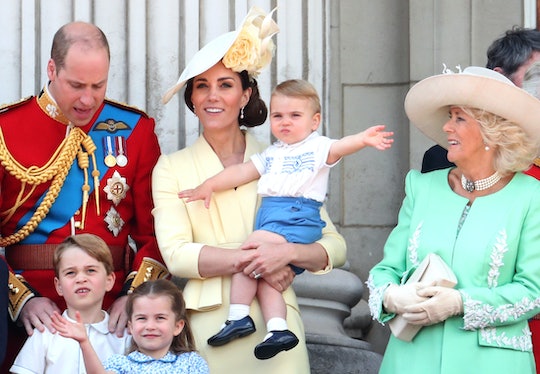 Prince Louis Waves From The Balcony & The World Says 'Aww'

June is fast becoming my favorite month for several reasons. Despite the fact that I'm no longer in school, I still get the "school's out for summer" feeling and it's just delicious. Also, the weather is nicer and I can start thumbing through summer dresses and pretending I might wear them this year. But finally... June is the month of the annual Trooping The Colour parade in celebration of Queen Elizabeth's birthday. This is becoming my super favorite thing, especially when all the royal kids are in attendance. The best part this year? Prince Louis waving from the Buckingham Palace balcony with all the enthusiasm of his older sister Princess Charlotte. That baby couldn't get enough of it, and of course we can't get enough of him.

On Saturday, the 1-year-old Prince Louis had his first appearance at the annual Trooping The Colour event, according to People, a parade featuring all of the British military regiments on horseback and foot in honor of the Queen's birthday (her official birthday, apparently, since her actual 93rd birthday was April 21). This parade has been happening for 260 years to celebrate the birth of the reigning sovereign, but it's obviously the very best now for several reasons. Those reasons are 5-year-old Prince George, 4-year-old Princess Charlotte, and their baby brother Prince Louis... the three children of the Duke and Duchess of Cambridge. It's a rare treat to see them all together, and my apologies to the Queen and all of those lovely soldiers but they steal the show every time.

This year's Trooping The Colour was a big event for Prince Louis, as it was his first official royal event other than his christening last July (but since he was only three months old then I sort of figure it doesn't count). His appearance on the balcony in the arms of his father Prince William was the first time the public has really gotten a chance to see the young royal's personality.

And let me just tell you this; he's a real charmer who just loves to wave.

The sweet little boy was taking after his big sister Princess Charlotte, who has long been a fan of mimicking their great-grandmother Queen Elizabeth when it comes to waving to the crowd of cheering fans. Here she is at last year's Trooping The Colour waving like a little Queen.

Prince Louis wasn't just waving to the crowd at the Trooping The Colour this year, however. It seems the little boy also got a glimpse of his grandfather Prince Charles and waved at him. Much to the proud future King's delight.

It's lovely to see the royal children on the balcony genuinely enjoying themselves, clapping while they're watching the parade and waving to the crowd. I think it says something about how protected they are from all of the media attention that they don't appear to be threatened or upset during a public event.

Prince Louis looked happy and comfortable waving at the crowd, much like most children his age might be. Which is a lucky thing for the rest of us.