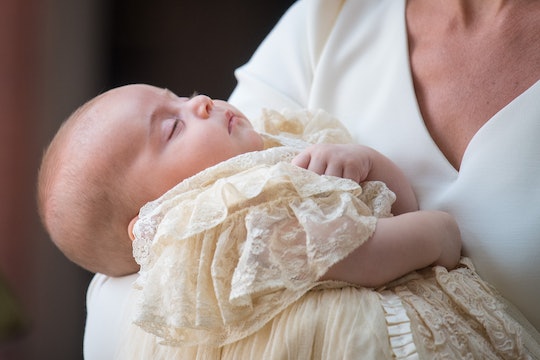 The Thank You Cards From Prince Louis' Christening Are *SO* Precious

Prince Harry and Meghan Markle, Duke and Duchess of Sussex's wedding may have been the royal event of the year, but Prince Louis' christening was a very close second. And a few months later, Prince William and Catherine, Duke and Duchess of Cambridge are expressing their gratitude for the public's support of their newest lil' cutie. Earlier this week, photos began to emerge of the cards Prince William and Kate Middleton sent to Prince Louis' well-wishers following his christening — and the couple chose an absolutely perfect photo for the cards.

Over the past few days, Instagram users have shared photos of the thank you card Prince William sent out on behalf of his son, Prince Louis. "The Duke and Duchess of Cambridge were touched that you took the trouble to write on the occasion of the Baptism of their son, Prince Louis," the card allegedly reads. "Their Royal Highnesses are so grateful for all the wonderful messages they have received and send you their warmest thanks and best wishes." Romper reached out to Kensington Palace to confirm these cards were real, and the palace confirmed that they are.

On the other side of the card, there is an utterly adorable photo of Kate and Prince Louis. The picture, which circulated online in the days after the christening, shows a beaming Kate holding baby Lou in his christening gown. Prince Louis is wearing the biggest, most delightful grin you've ever seen (from someone who doesn't have teeth, at least).

The photo seems to be a favorite of Prince Louis' parents, which is no surprise, considering how gorgeous and joyful it is. About a week after the christening, Kensington Palace's official Instagram shared the same image to Instagram. "The Duke and Duchess of Cambridge have released an additional photograph taken following the christening of Prince Louis," the caption read. "The Duke and Duchess hope that everyone enjoys this lovely photograph of Prince Louis as much as they do."

Prince Louis' was christened on July 9 of this year, when he was about 2-and-a-half months of age. The Archbishop of Canterbury conducted the service, which was held at the Chapel Royal at St James's Palace, according to the official royal website. Kensington Palace released official footage of the royal family proceeding in and out of the chapel before and after the service, but the ceremony itself was kept private. Die-hard royal fans may have been bummed that they could not watch the christening, but it completely makes sense that Kate and Prince William only wanted to share the special moment with close family and friends.

The royals released a few other photos from the christening, including a gorgeous portrait of the family of five. Based on the photo, Princess Charlotte already seems to be a big fan of the camera, while Prince George looks like he'd rather be watching TV.

Even though they're probably exhausted all the time, Prince William and Kate are undoubtedly over the moon to be parents of three. When the couple debuted Prince Louis on the steps of the Lindo Wing at St. Mary's Hospital in London, they both looked incredibly happy. At the time, many expressed awe that Kate managed to look so well-rested, calm, and content just hours after giving birth. Many moms say that the pain of childbirth feels like a distant memory as soon as you meet your baby, and it seems like Kate had a similar experience.

Interestingly, his debut on his day of birth and his christening are the only two times Prince Louis has made public appearances. (No, he did not make the royal wedding.) Here's hoping more Prince Louis content makes its way out of Kensington Palace sometime soon, because that nugget is too cute for words.

More Like This
Kate Middleton Shares How Her "Little Louis" Comforted Her After The Queen's Death
Prince Louis Is Asking His Parents Questions As He Tries To Understand Queen Elizabeth’s Death
Queen Elizabeth's Corgis Will Be "Spoiled Rotten," According To Prince William
Prince William Says Walking In The Queen's Procession Reminded Him Of His Mom's Funeral