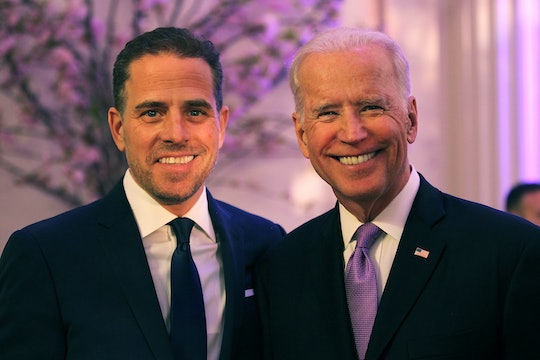 PSA: It's Completely "Appropriate" That Dads, Like Joe Biden, Kiss Their Sons

After a Trump supporter asked in a tweet if a photo of former Vice President Joe Biden kissing his son Hunter was "appropriate," Twitter promptly reminded the world that yes, it's completely normal for fathers to show affection towards their sons. It's actually more than just appropriate, some might even call it essential for dads to model loving behavior.

On Wednesday, Newsmax TV host John Cardillo, who frequently uses his platform on Twitter to criticize the Democratic presidential candidate, tweeted a black-and-white photo featuring Biden kissing his adult son Hunter on the cheek. Biden's relationship with his 50-year-old son, who he raised as a single parent after his first wife died in a car crash alongside their infant daughter in 1972, has been called into question during the 2020 presidential race. Perhaps most notably during the first debate between President Donald Trump and Biden when the former VP defended Hunter's struggle with substance abuse as Trump attacked him.

Biden's continued love and affection for his adult son, however, is apparently not considered "appropriate" by Cardillo. "Does this look like an appropriate father/son interaction to you?" he tweeted.

Several Twitter users were quick to respond that yes, it is totally appropriate for a father and son to show each other affection.

Brian Cuban, an attorney and author, responded with a loving photo of himself kissing his father. "I’m truly sorry you don’t have a good relationship with your father — I really am," Cuban tweeted.

There is something to be said for fathers who are not afraid to show physical affection with their sons whether they are adults or children. As one person pointed out on Twitter, "Hunter has lost a mother, a sister, and a brother. His father is trying to make up for that lost love." Biden's son Beau died in 2015 when he was 46 years old after a battle with brain cancer.

One dad, who admitted he was not a Biden fan, tweeted that he found no fault in this photo. "Honestly man, I love on my kids constantly. There’s nothing wrong with physical affection from a parent to their child," he tweeted.

"My dad told me he loved me every day of my life until he died. Every time I boarded an international flight, he got grumpy & cried. A dad is someone who’ll kiss your head & tell you it’s gonna be ok, wherever you are, however old you are. You not knowing this this is real sad," another person tweeted in response to Cardillo.

Research has shown that fathers can help set the bar for lifelong relationships. According to the Pediatric Associates of Franklin, of the American Academy of Pediatrics, sons tend to look to their father for examples of how to behave themselves, and a loving, affectionate father simply teaches their son that this is not just normal but preferable.

Thankfully there are people out there who know this and when they see a photo of Biden kissing his son on the cheek, they see a dad who is comfortable showing love for his children.