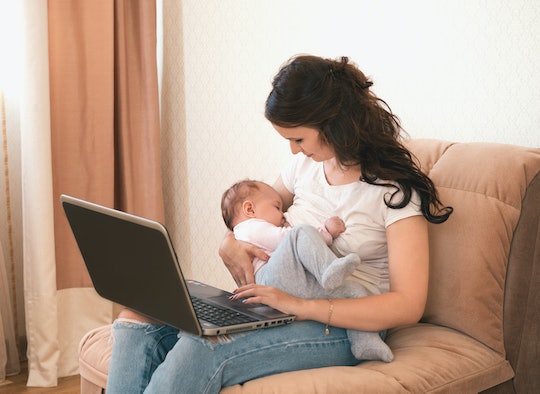 PSA: Stop Making This Annoying Assumption About Single Moms Who Work From Home

I usually start my days pretty much the same way: I wake up, tell my 5-year-old son that, no, today is not the day he can finally use his iPad before school, bang around in the kitchen in an un-caffeinated attempt to fill his stomach and lunchbox with something nutritious, put on whatever faded gym clothes are clean, walk him to school, go to the gym on my block, walk home, quickly shower, and then sit down to work all day as a freelance writer and editor. And as a single mom who works from home, I have to say that I like our daily routine. What I don't like, however, is the assumption everyone makes about me, simply because I'm a single mother who works at home.

My son and I thrive on our routine, which is why I will not apologize for it. I like that, at the end of the day, I get to walk to pick up my kid from school, bravely hold his little hand, walk home, throw some more nutrients at him, hose him down in the shower, read a few books, tuck him in, wait for him to wake up 75 times in 20 minutes to pee, spend a few more hours working on whatever work I didn't have time to finish while my kid was at school, finally decide on a few things that can reasonably wait until the next day, and read for a bit so my brain will slow down enough to sleep. I like that, yes, I might swipe on a dating app for a minutes, looking at people I'll never make time to go out with anyway. I like that I get to go to sleep in a huge, comfortable bed.

I like that, with little variation, the aforementioned is what my weekdays look like. I like that, for the most part, I love every single bit of it.

But there's a quiet, pervasive element to most of my days that I'm always lightly aware of, mildly irritated by, but am powerless to fix: What other people assume about my life as they see me going about my daily routine.

When someone doesn't readily fit one stereotype, the lean in the direction of least resistance, which is usually another stereotype.

Because here's what it looks like to a distant neighborhood observer: A young-ish (at least younger than the vast majority of other parents in my neighborhood) single mom (another demographic anomaly in my Brooklyn neighborhood) who is most often seen casually strolling with her kid to and from school wearing athleisure, showing no signs of being headed to or from a job. The neighborhood isn't cheap and neither are her kid's shoes (they look at that around here) — someone's footing the bill for the life my kid and I are living, and there aren't enough outwardly visible signs that I'm the one hustling it up, so people are left to fill in the blanks themselves.

And so it goes with most humans, right? When someone doesn't readily fit one stereotype, the lean in the direction of least resistance, which is usually another stereotype. If I don't look the part of frazzled, frantic, laptop-toting, nanny-entrusting, Professional Single Mom™, then I must be lazy, spoiled, Single Mom Whose Life Is Paid For By Her Ex Or Her Parents.

But getting my life to the point it's at was a lot of work, just like any time you see any parent experience a moment that presents as "effortless" or even "not quite exhausting," there's an iceberg of work beneath that moment. If a parent — especially a single parent — is not actively working their ass off during any given moment, it's undoubtedly because they previously worked their ass off in order to have that moment function smoothly, and/or they'll be working their ass off later because of it. That's just the deal.

It's the constant low hum in the background of every interaction we have with other parents. It's the white noise we fall asleep to every night.

I know that no one assumes that, in between being spotted around the neighborhood in workout clothes and a messy bun on a Wednesday morning, I'm in my home office (OK, my couch because I can't afford a place big enough for an office) doing actual, real, money-making, sometimes stressful work, and managing countless variables that make my life and my kid's life function. The structure of my life is possibly a little atypical (but I'm not a freak show, guys, calm down — a lot of parents work at home), but I designed it that way so I could maximize my time at both parenting and work. Because if there's one thing people love doing more than supposing they know how single moms make their sh*t work, it's scrutinizing us for any instance of us being less than flawless at any part of our lives. Like, we're already raising our kids in an unconventional family structure, so we damn well better do it perfectly, lest any tiny moment of imperfection be weaponized against us as rock-solid evidence that we are, indeed, leaving our kids at a disadvantage by raising them in a so-called "broken home."

If any of that sounds like an over-dramatization of the degree of criticism single moms feel, you are probably not a single mom. Because that's just how it is. We know it all the time. It's the constant low hum in the background of every interaction we have with other parents. It's the white noise we fall asleep to every night.

And this assumption about single moms who work at home is particularly noxious. If we have our lives set up so that we can work, be present for our kids, and still find time for things like having coffee with friends or hitting the gym, we are f*cking superheroes in our own eyes. We moved the mountains, we slew the dragons, and we won the war. It's not that we expect anyone else to throw us a parade for this incredible feat of Making It Work that we managed to pull off. We don't even need recognition for it. When you are making it work as a single mom, you get to live your reward everyday, which sounds trite, but it's extremely true.

We're creative as hell and working harder than you think during all the times you don't see us around the neighborhood.

But on the other hand, when someone looks at our lives, which are the product of painstaking work and coordination and sacrifice and risk, and decides to write it off like, "Oh, I wonder if her dad or or ex pays her bills," it's worse than neglecting to give us credit — it's using our triumph against us.

And why? Because when you're so entrenched in a conventionally structured life — you have a job outside the home, and/or a partner who works and parents with you — it can be really challenging to conceive of someone living the kind of life work-at-home single moms appear to be living without them having applied some massive cheat code.

I guess some single moms have that cheat code, and I'm not here to judge them for that, because I can't say that if my ex was loaded or my parents were, and they wanted to subsidize my life and/or my kid's life, that I would turn them down. I mean, maybe I would. I don't know. I probably wouldn't. Most people probably wouldn't. So for the moms who don't have to worry about money because they spend someone else's, hey, live your life. I hope you do great things with all that free time. If you do lame sh*t with all that free time, I'll judge you for that, and I think we can all agree that's fair.

But for most single moms, someone else's trench of money is not a factor in how we get by. And while we (ideally) have a support system as much as any other parent (married parents aren't accused of "letting their mom raise their kid" when grandma babysits, but that's a whole other ocean of double standards), most single moms are ultimately relying on themselves, for money and every other kind of support. And if you see us going to the gym at 11:00 a.m. on a Thursday morning, all of that is still true. We're creative as hell and working harder than you think during all the times you don't see us around the neighborhood.