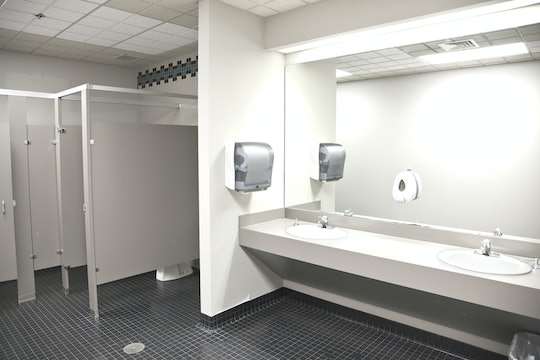 The One Item All Nursing Moms Should Pack In Their Pumping Bag, Bc You Just Never Know

Whenever I see a social media post from a breastfeeding mother about having to pump in a public bathroom, whether traveling or attending a work conference, I, along with most of the internet, get pretty upset. Reading through some of these horror stories (pumping in airport bathrooms is a big one), I'm appalled, though sadly not surprised, that so many women still have to deal with this crap in 2018. And all of this talk about pumping in public places definitely makes me ask the big questions: "How safe is it to pump in a public restroom anyway?" and "Is there anything that you can do to make it a little less cringe-worthy?"

You would think that with all the pressure that gets put on mothers to breastfeed — breast is best, right? — that society would try to make it easier, rather than harder, to do so. One mother, Krista Ellis, recapped her recent pumping experience while at a hotel, attending a conference in New York City. In her post, she shared that she was told by hotel employees to use their public bathroom, instead of being granted access to one of their private rooms or a dedicated lactation space.

And Ellis is certainly not the only mother who has had to go to such great lengths to express that liquid gold for their babies. Even celebrities aren't saved from the hell that is pumping in public bathrooms. Take this year's Golden Globes, for example, when Brooklyn Nine Nine actress Chelsesa Peretti was caught checking her cellphone on camera, but it turned out she was actually trying to find out when she could pump. And where did she end up doing so? You guessed it: In a bathroom stall, according to her tweet, "I had to pump and was checking what time to get up and do so in a bathroom stall #glamour".

Public bathrooms range from being mildly icky to straight up foul. So what can you do to ensure you're keeping your milk (and equipment) as safe as possible? "Always have a small towel or blanket on you so if the bathroom doesn't have a shelf available next to you, you can lay your pump down on the ground with the towel underneath it," explained Helen Anderson, a registered nurse midwife, lactation consultant, in a previous interview with Romper. "That way you're still being safe and hygienic, and you're not trying to balance it on your lap, which is definitely not relaxing."

Having two lightweight tea towels in your bag at all times can help give you some peace of mind. That way, should the need to pump in an unsavory space arise, you can use one towel to wipe down any wet surfaces, and the other towel can be spread out on the ground as a dry, clean space to place your pump. Another helpful hack is to always have a gallon-size ziplock bag in your handbag, so that you can roll up the dirty towels and quarantine them from the rest of your bag's contents afterwards.

With the demands that are placed on working mothers these days, it does make you wonder why there aren't laws mandating that breastfeeding mothers have access to more sanitary spaces.

So, what are your rights as a breastfeeding mother? Thanks to the Affordable Care Act, some strides are being made in that department. Employers must now provide a clean space, other than a bathroom, for nursing mothers to use for pumping, according to the National Conference of State Legislatures. Yet, as any breastfeeding mama knows, the need for pumping can arise pretty much anywhere, not just at the office.

Besides the Affordable Care Act, are there any some laws that help breastfeeding moms, albeit not as much as there should be. It turns out that legislation varies from state to state, according to registerednursing.org. Some states, like Illinois and Massachusetts, are strong on breastfeeding rights — protecting a woman's right to breastfeed in any public or private location, exempting breastfeeding mothers from public indecency laws (appallingly, that's not a thing in all states), and even working to develop breastfeeding awareness, explained Registered Nursing. But, other states like Iowa, New Mexico, Arizona, Wisconsin, and Georgia don't go nearly as far, the site reported. To find out what breastfeeding laws your state has on the books, check them out here.

Perhaps this comment on Ellis' facebook post speaks for all of us: "This is unacceptable. As a nursing mom, I am appalled. As a human being, I am saddened. Let's support each other."