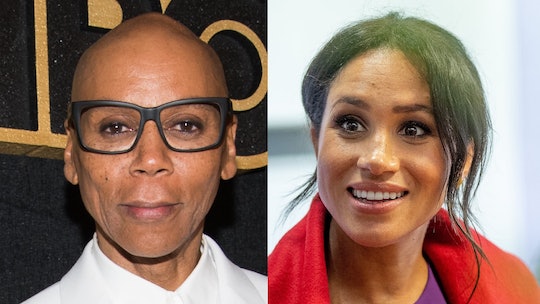 Sometimes, a reassuring piece of advice from RuPaul is all one needs to feel better. And considering the gossip being spread about Meghan Markle, Duchess of Sussex at the moment, hopefully she feels the same way. RuPaul's message to people bashing Meghan Markle is pretty spot-on, and his advice could definitely help others in similar situations.

In an appearance on Watch What Happens Live with Andy Cohen this week, the RuPaul's Drag Race host played a game called "RuAssure Us." (In case you're confused, that's a play on "reassure us.") During the segment, Cohen presented RuPaul with some "not-so-fun current events," and asked him to tell viewers "why it's all gonna be OK." Yasss.

"What RuAssuring thoughts can you share with Meghan Markle, [who] stands amid rumors that she is difficult to work with and is causing havoc?" Cohen asked RuPaul. "Well she is with child,” RuPaul responded. "And the truth is, all these people spreading all these rumors about her, they the problem."

Basically, Ru is saying that the best thing Meghan can do is ignore these rumors, since the people spreading them are the problem, not her. And as he playfully added at the end: "If they ain’t paying your bills, pay them b*tches no mind!"

That seems like pretty sound advice for anyone who finds his or herself the victim of nasty gossip — especially someone in Meghan's position. Not only is she a royal, with all eyes on her, but she is also pregnant. She doesn't owe an explanation to anyone. Her focus right now is carrying out her royal duties, and also taking care of herself during her pregnancy.

In case you're anything like RuPaul and you tend to ignore the goss, here's a refresher on the rumors being spread about Meghan. A few days later, the Daily Mail reported that an anonymous "close friend of the Cambridges" suggested that there was a rift going on between Meghan and Catherine, Duchess of Cambridge. "Kate and Meghan are very different people," the Daily Mail claimed the source said, adding "They don't really get on." That claim should be taken with a very large grain of salt, considering the Daily Mail's only source was an anonymous one. However, this news story broke shortly after Meghan and Harry, Duke of Sussex announced they would be moving to a new home called Frogmore Cottage, and away from Kensington Palace, where Kate and William, Duke of Cambridge live with their children.

Many people criticized those who spread this rumor, accusing tabloids of pitting the two duchesses against each other.

And even though Meghan has not publicly addressed the rumors of a feud with Kate, Kensington Palace did issue a short statement on the subject. A few days later, The Sun reported rumors that Meghan allegedly spoke disrespectfully to Kate's staff, and that Kate allegedly confronted Meghan about it. (Again, I'd take that with a massive grain of salt.)

The following day, Kensington Palace issued the following statement when asked about the alleged incident, as per The Sun: “This never happened.” Well, that settles that! Hopefully the rumor-spreaders will let Meghan enjoy the last few months of her pregnancy in peace — but should they continue trolling, hopefully Meghan heeds RuPaul's wise words.