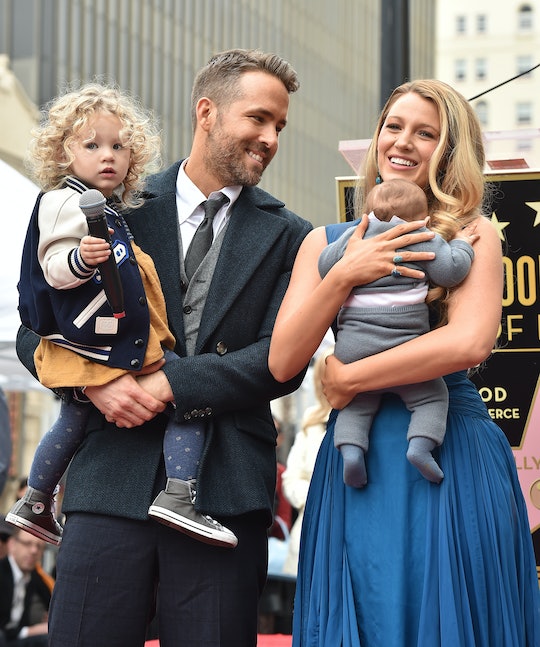 Ryan Reynolds seems to really love being a dad. He certainly has a history of filling his Twitter feed with prime dad jokes. Many of those were written back when he as a father of one little girl, and then two little girls. But how is he feeling now that he has added a third little girl to his brood with wife Blake Lively? Pretty well, it seems! In a new interview with TODAY, Reynolds opened up about life with three daughters and it sounds like he's a big fan of all that feminine energy flowing around his house.

The Deadpool actor and his wife welcomed their third daughter earlier this year, confirming her arrival in mid-October when Reynolds posted a photo with her on Twitter, though he was careful to not show her face or reveal any details. Both Reynolds and Lively tend to be very protective of their three daughters' privacy, so neither has shared much information about their newest baby girl. In fact, the couple, who are also parents to 5-year-old James and 3-year-old Inez, even managed to keep Lively's pregnancy a secret until the release of Reynolds' film Detective Pikachu in May, where the Gossip Girl actress surprised everyone with a visible baby bump in a yellow dress.

Now, though, Reynolds is giving fans a tiny glimpse into his world as a father of three. And as he explained in an interview with TODAY on Thursday, he "loves" living with all women. "It’s all women," he said. "I’d have it no other way. I love it, it's incredible." He added, "I’m doing my part to wipe men off the face of the Earth."

Reynolds also shared that, now that he has three daughters and two of them are getting older, he is struggling to leave the house to go to work these days. "It gets a lot harder when they ask, ‘Where are you going? When are you coming home? Why are you leaving me?’" he told TODAY.

As for Lively, she is keeping pretty quiet at the moment. Presumably enjoying time at home with her kids and Reynolds. After all, as she noted in an October Instagram post celebrating her husband's birthday, she "picked a good one." A good one who appreciates his house full of female energy.

More Like This
John Mulaney Teaches His Son To Say "Ahh" After Drinking Water In A Super Cute Video
Nick Cannon Announced The Birth Of His 9th Child, A Daughter Named Onyx
Ryan Reynolds Joked About Wanting To Duct Tape An iPad To His Kids' Faces
Blake Lively Revealed She's Pregnant With Baby #4 In A Sparkly Dress & Sky-High Heels