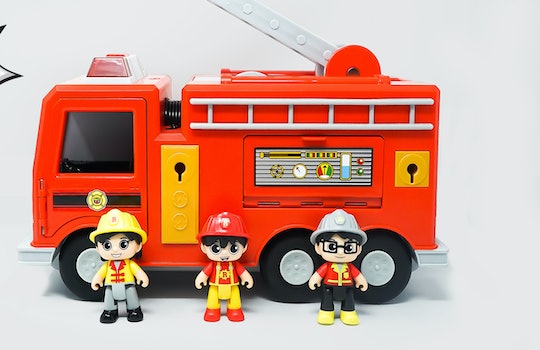 Fans of YouTube sensation and Nickelodeon star, Ryan, have something new and exciting to add to their holiday wishlists: Ryan’s Mystery Playdate Fire Truck Mystery Box by pocket.watch and Just Play is available now to pre-order at Walmart, and it’s sure to be a hit among rescue-loving Ryan enthusiasts.

The bright red fire truck comes with three figurines including Ryan (wearing an adorable fire hat and suspenders), his mom, and his dad, all ready to rush to an emergency. I’ve always loved miniature versions of life-sized things — I was the odd child who collected dollhouse furniture before I had a dollhouse — so the small figures fill me with uncomplicated joy, much like when I saw that Ryan uses a toothbrush with his own face on it.

The fire truck, designed for ages 3 and up, joins several other new toys from Ryan's Mystery Playdate line, including a costume box and a surprise door. And it’s not called a "Fire Truck Mystery Box" for no reason; the toy functions first as a fun puzzle where kids have to search for a hidden key to unlock secret doors. You'll find accessories behind the door, and there are "rare gold versions of Ryan’s firefighter accessories,” found in some of the trucks, according to a rep for the toy. Ryan’s dog also makes for an exciting surprise (there are three versions of the pup and you don't know which one you'll get).

At $35, Ryan’s Mystery Playdate Fire Truck Mystery Box won’t break the bank, plus the interactive toy features lights and sounds and comes with two AAA batteries (proving once and for all that Ryan cares about us). The only hitch is the toy won't actually start shipping or be available to purchase from Walmart stores until December 1, so you'll have to exercise a little bit of patience.

Ryan, whose last name is not made publicly available, first went viral on YouTube for his Ryan ToysReview videos, which feature him unboxing new toys and interacting with his charismatic parents. The channel has over 22 million subscribers, has racked up billions of views, and Forbes named Ryan as the number one highest paid YouTuber in 2018. His internet success led to a Nick Jr. show called Ryan's Mystery Playdate, which is now in its second season, an app, and a line of toys. Oh, and did I mention he’s only 8 years old?

The Ryan franchise hits on two things kids can’t enough of (even if parents just don’t understand): surprise toys and unboxing. Toys that contain an element of mystery are not a novel idea; in the early ‘90s, I was really into Puppy Surprise, a plush dog (or cat, in the case of Kitty Surprise) that had an unknown amount of puppies inside. It was a bizarre toy honestly, but it felt like a major rush to see how many you got.

“There are biological reasons young children like watching unboxing videos, and it’s the same reason they’re drawn to surprise toys. Kids don’t really get good at understanding and anticipating the future until they’re about 4 or 5,” Rachel Barr, the director of the Early Learning Project at Georgetown University, told The Atlantic in a 2018 article. “Unboxing videos and surprise toys allow kids to enjoy the anticipation without being too afraid because they know roughly what will be in the package, just not the exact details.”

So before you get jealous of the fact that Ryan gets paid to play with toys and you get paid (far less) to... work, consider that maybe your kiddo will be so lucky to find the gold firefighter accessories within the fire truck, and maybe, just maybe they'll be worth something one day. Then you'll have 22 million dollars just like our friend Ryan. Ha, well, dream big.