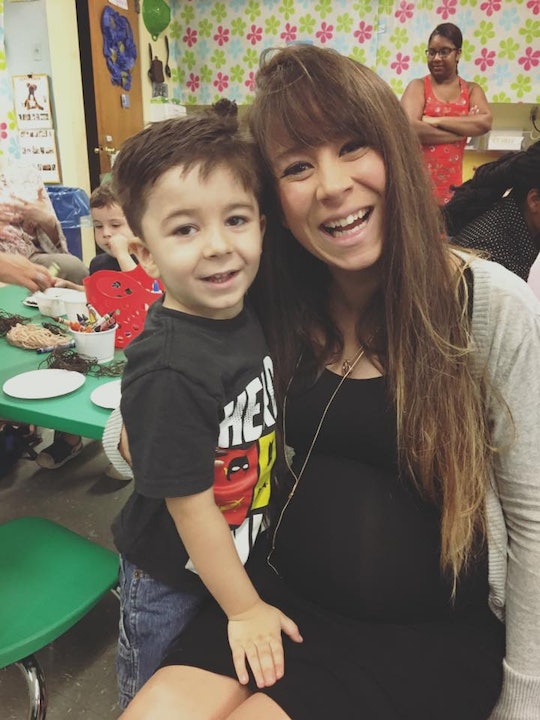 School Is Changing My Son, & There's Nothing I Can Do About It

I was admittedly nervous about the entire prospect of pre-kindergarten. Sure, I was excited for my son and all the new opportunities he was going to be able to enjoy in a classroom of 15 4- and 5-year-olds, but the day I dropped him off at school was the first day I left my son in the capable hands of someone else. Prior to his foray into education he was always with either his father or myself, so learning to trust a relative stranger to care for my son was... a lot. But that wasn't what I feared most. It's not what I still fear now, either, and as a few weeks have gone by and my son has embraced school with an unbridled joy that truly does make me happy. No, I'm afraid that my son is going to lose parts of himself at school. I'm afraid that the time he spends in the classroom, as important as it is, will take away certain characteristics my son naturally embodies.

Admittedly, my fear is steeped in selfishness. Of course my son is going to evolve and grow, especially in school. Of course he isn't always going to be the care-free, defiant 4-year-old he is now. I don't want him to be, either. The entire point of caring for another human being is facilitating their growth and independence and intrinsic search for knowledge. My entire job as my son's mother is to help him learn and evolve and change as the world becomes more open to him and he experiences more of it.

But at my weakest, I find myself terrified of what that truly means. And not because I think my son will somehow fail to grow into the capable adult I know he one day will be, or because I fear he will somehow turn into someone I don't know, like, or recognize. I have faith in my ability to raise my son in a manner that will set himself up for success, and I have faith in my son's future abilities to decipher right from wrong.

... to watch from the sidelines as pre-kindergarten strips that naivety away, even in the most minuscule, most innocent of ways, is to remind me that the small "inside jokes" I have with my son are fading with each passing day.

I'm scared because I already see these small changes happening every single day; the changes that exist to remind me that who my son is right at this moment is not who he will be tomorrow, or the next day, or a week from now, or a year from now; changes that are making up my son's childhood and pushing him towards the end of it simultaneously.

These are small changes, to be sure, and undoubtably an inevitability. But he's 4. He's still so small; so young; so naive to all that is going on in the world around him. And to watch from the sidelines as pre-kindergarten strips that naivety away, even in the most minuscule, most innocent of ways, is to remind me that the small "inside jokes" I have with my son are fading with each passing day.

Before I know it, my baby will insist we call movies by their correct name. "Bing Bong" will be Inside Out, "Red Robot" will be Big Hero 6, "Pumpkin" will be The Nightmare Before Christmas, and "Tangle Horse" will be Tangled. My son will learn the correct names and insist we stand by them. A classmate will say the title of a movie, or correct my son when he gives a movie another name, or even make fun of him for not saying the "correct name" initially. He'll come home one day and ask to watch Zootopia, not "Bunny," and one tiny part of his childhood will no longer exist.

I know, perhaps before the year is over, that he'll stop calling his father "Big Babe" or his mom "Mom Babe" or himself "Little Babe" and, instead, demand we all call each other by our first names. After all, and after only three weeks into pre-kindergarten, my son is already referring to us as "his parents."

His language and his mannerisms will change, ever-so-slightly, as he discusses nap time or snack time or a squabble over a coveted toy. He will, right before my eyes, grow up.

Maybe a classmate will correct him after he washes his hands in the sink or engages in a water activity, and his "water bumpies" will just be wrinkled, pruney fingers.

When winter sets in and the heaters come on, I know my son will stop calling those obnoxiously loud radiator pipes "click clack," and he will simply ask that his mom and dad turn on the heat.

I'm sure the movie theater will no longer be "the quiet house" after he talks about the time mom took him to see Hotel Transylvania 3.

I have no doubt that his beloved "doggy" will just be a stuffed animal.

I have a feeling his "gumbrella" will be an umbrella, the "gamote" will be a remote, and the "gumtroller" will be a controller in just a few short months.

Again, these changes are small, and to anyone who isn't me probably something ridiculous to fret over. And since they are inevitable — it's not like you would want to be friends with a 30-year-old who refers to his mom as "Mom Babe" — I'm not entirely sure I can blame my son's time in pre-kindergarten for them, either. At least not entirely.

But he is learning from other children, from his teachers, and from organic interactions with other people that are sure to expand his world view and, in the process, redefine what he knows now. And I'm learning that when his world expands, the world he has grown accustomed to is slowly stripped away of the tiny things that are no longer relevant. The silly names. The nicknames. The incorrect pronunciations. The subtleties of my son's knowledge of the world that always make me smile. The nuances that make him my son.

Today, I will pick my son up from school and ask him what he did today. And, without fail, he will smile his signature smile and talk breathlessly about his day with his best friend and his classmates and his teachers. His language and his mannerisms will change, ever-so-slightly, as he discusses nap time or snack time or a squabble over a coveted toy. He will, right before my eyes, grow up.

But he will also reach out to hold my hand as he tells me about his day. And just like I'm holding onto the memories of his past, I will squeeze his hand just a little bitter tighter than I did yesterday. I will hold onto him — to all of him — in that fleeting moment.

Because tomorrow, my son will be different.