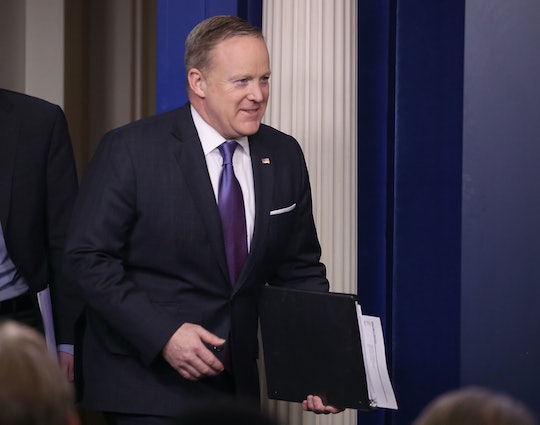 When Sean Spicer resigned as White House press secretary last week, many people wondered what exactly his next move would be. Write a book? Become a cable news talking head? Or would he retreat to the world of reality television, where his former boss, Donald Trump, made a household name for himself? Because this is 2017 America, rumor has it that Sean Spicer's new job will be sashaying across a dance floor on ABC's Dancing With The Stars. Yes, really.

For what it's worth, there is no confirmation that Spicer will be joining the cast of anything, anytime soon. ABC did not immediately respond to Romper's request for comment, though the network told New York Magazine, along with other outlets, that it doesn't "comment on casting." However, Spicer was spotted by various news outlets in Manhattan this week, taking meetings with ABC, NBC, CBS, and Fox News. So he's definitely up to something.

Spicer wouldn't be the first person in politics to sign onto waltzing with semi-famous people, though. Former presidential candidate and current Secretary of the Department of Energy Rick Perry was once a contestant on the dancing show. Being on television in any capacity is apparently a good way to beef up one's resume these days. Trump did say upon his resignation that Spicer would go onto great things based on his television ratings. Any network would be lucky to have him.

But seriously, everyone. Sean Spicer should not be on Dancing With The Stars. The show is absolutely lovely and a great space for viewers to see the "other side" of people they think they know. But after his reign as press secretary throughout the first six months of the Trump presidency, Spicer on Dancing With The Stars might be just a little too much.

Remember: This is the man who took on the ultra difficult job of speaking for the Trump administration, often to his own detriment. Almost immediately, Spicer became a Twitter meme, since every cable news network was intent on showing the White House press briefings on camera, each and every single day, and he may not be totally into people laughing at him on live television anymore.

Melissa McCarthy's impression of Sean Spicer on Saturday Night Live will likely outlast the former press secretary's own legacy. Actually, it has been rumored that Spicer might have fallen out with Trump simply because he became an instant meme. What happens if he gets on Dancing With The Stars and kills it? Will there be reality star beef? Should we get Andy Cohen involved here for a reunion? Did I just come up with the best Bravo special ever? (Andy, hit me up.)

Although there is nothing wrong about joining the cast of Dancing With The Stars, any human being with a capacity for empathy has to just hope that Sean Spicer isn't seriously considering the offer. For so many reasons, the man has already become a symbol of everything ridiculous (and not scary) about the current administration. The last thing America needs right now is Spicer trying to do an ocho atrás on prime time television.

Please, Sean, America begs you. Either spill all the beans or sit down.