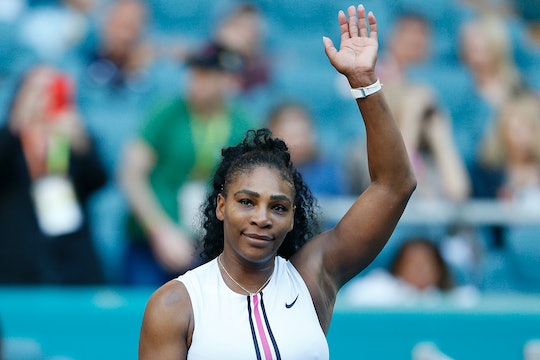 I think we can all agree it would be a bit daunting to have tennis queen Serena Williams as your mom. She has won 23 Grand Slams during her tennis career, the second most of any woman playing in singles matches in tennis history, and let's be honest, the list of her tennis accomplishments is jaw dropping. Naturally, all of that might have people wondering if Serena Williams' daughter will follow in her mom's footsteps some day. After all, her sister Venus Williams is also a tennis great, meaning the talent runs in the family. But since Alexis Olympia Ohanian Jr. is still just a 1-year-old little girl, perhaps she doesn't quite have the drive it takes just yet... as Williams' recent Instagram video sort of hilariously proves.

The tennis great and her husband, Reddit co-founder Alexis Ohanian Sr., welcomed little Olympia on Sep. 1, 2017. Since then their daughter has become something of a social media sensation, with her own Instagram feed amassing more than 570,000 followers (which feels pretty shameful to a grown woman who might have about 25 not counting family). Of course Olympia manages to entertain her followers by being super funny and adorable, just like she does in this video her mom shared on her own Instagram feed.

In the video Olympia is holding a tennis racket and probably fans all over the world shared a collective sharp intake of excited breath like, Here we go, the next tennis legend is about to develop before our very eyes. Even Williams herself captioned the post:

History in the making....

But then Olympia throws the racket on the ground and walks away looking for something better to do and this, to me, is such a perfect representation of parenting. Because it turns out your kids don't really care about your massive, historic accomplishments in the tennis world all that much. They're totally just thinking about themselves.

To be fair, Olympia is just a little toddler and figuring out all of the things she likes for herself for now. As her mom told Good Housekeeping, these hobbies include running and being wild all the time:

Her mom might not exactly be pushing her in that direction anyhow. As she told USA Today last year, she has mixed feelings about the idea of her little girl following in her footsteps:

As nice as it might be to imagine Olympia Ohanian enjoying a future in tennis, I think her mother has the right way of it. Let her run around and dance and be silly and be a kid.

And if she likes tennis, great. If not? Just as great. That's called healthy parenting.