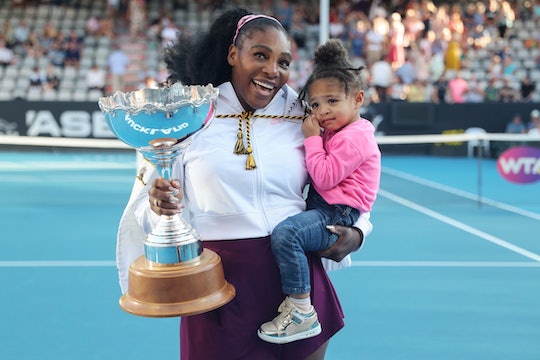 What's better than putting on a floor length dress and belting out classic songs from Beauty And The Beast? Nothing, of course, and that's exactly what Serena Williams did during a little Disney princess dance party she had with her daughter Olympia recently.

On Thursday, the tennis star shared the sweetest video of herself dancing around her home with her 2-year-old daughter. The mom and daughter duo had dressed up as Belle from Beauty And The Beast, specifically the iconic yellow gown she wore when she was invited to dine with the Beast. "Keeping busy," Williams captioned the video.

The two of them set about dancing to the song "Belle" and to Williams' credit, she knocked it out of the park by knowing every word. Like seriously, every word. Even when "Belle" walks through the village and starts greeting the villagers like the baker and such. While little Olympia clearly loved being part of the dance party, I suspect her mother was the one who loved it most...

Williams' fans loved the video, too. One was especially fond of Olympia's breakout moment when she decided to bust a move. "Olympia with the breakdancing choreography!!" one commented, while another couldn't help noticing Williams' enthusiasm for the mom-daughter dance routine, writing: "I think the mom is enjoying this more than the daughter."

Olympia, who Williams shares with husband and Reddit co-founder Alexis Ohanian, is apparently a big fan of copying her mom. As Williams noted in an Instagram video from May 21 when the two were doing their morning routine in matching pajamas, no less, "This little baby girl pretty much does everything I do."

Lucky for Olympia, between being a tennis queen and championing women's rights, her mom is a pretty amazing example to follow. Her father, too; amid ongoing protests demanding an end to systemic racism, Ohanian chose to step down from the Reddit board and urged board members to replace him with a Black candidate in an effort to encourage racial equality and to make the world a better place for his daughter.

"It is long overdue to do the right thing. I’m doing this for me, for my family, and for my country," Ohanian wrote on Instagram. "I’m saying this as a father who needs to be able to answer his black daughter when she asks: What did you do?"

As for little Olympia, she seems to be keeping busy herself. Disney princess dance parties don't happen without her busting a move, after all.