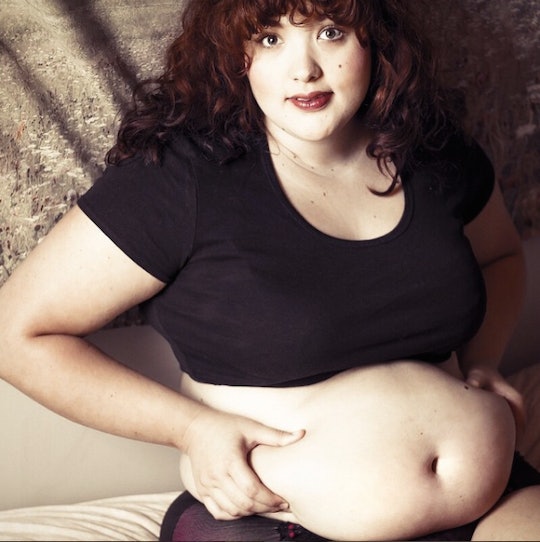 Seriously, I Wish It Was OK To Love My Fat Belly Even When I'm Not Pregnant

I was lying next to my best friend, watching re-runs of Jane The Virgin, when my bestie realized that my left hand was resting on my baby bump. "You do that thing where you constantly touch your belly now," she said, laughing. "Is it instinctual, or is the baby moving?"

At that point, I was seven months pregnant, but I'd only known about my pregnancy for a little more than two months. The baby had been a surprise, and one that I hadn't had any reason to suspect thanks to a symptom-less first and second trimester. But ever since the day I found out, and particularly from the moment when my partner and I decided that we were going to do this, I've noticed my hand gravitating toward my stomach throughout the day — not because my daughter is moving, or making me uncomfortable, but because it's a way for me to connect with the little human in the making.

I touch my stomach all the time these days, whether alone or in public. Now that my pregnancy is more obvious to the naked eye, I imagine most people recognize this action and give me a "pass" in the fatness department because they know I'm growing new life. Suddenly, it's become OK for me to show affection towards my belly. Suddenly, it's OK for me to be "overweight."

The sense of shame and stigma I've long felt for having a large stomach — and a large body overall — has reduced somewhat. But it's made me further question why it's usually not OK to love my fat body, most notably my fat belly.

As is the case for a lot of women — and I'd argue fat women, especially — I've had a complex relationship with my tummy since late childhood. At various points in my life, it's caused me to feel ashamed. I've stared down at it while sitting down, noticing that it plops at my mid-thigh, and cried over its lack of flatness. I've covered it in baggy dresses, and hidden it beneath skirted bathing suits. I've gazed upon the images of women whom the world tells me are "aspirational," and chastised myself for being so far removed from them. Like most of us, I've spent a lot of time believing that fatness of any kind is bad; and that I'm a failure for being fat.

As an adult, however, I've worked towards actively embracing my fatness. I've fought to deconstruct diet culture, educated myself on the core principles of Health At Every Size, worn a lot of low-rise bikinis, and surrounded myself by many inspiring women, who also understand the importance of body positivity. As a result, my belly has become a body part that I adore — not just when I'm pregnant, but all the time. I love its softness, the way it jiggles and bounces when I move, and the fact that it provides the people I care for with a magnificent pillow.

Normally, I am chastised for all of this: Not by my friends, but by strangers on the street, whose disgust at my rolls beneath a crop top is tangible. I get a lot of hate from internet trolls who wish me dead or Photoshop my body to make it look thinner, and I've been criticized by doctors and medical professionals, who ignore my legitimate medical complaints and offer me a few pamphlets on Nutrisystem instead.

When I'm pregnant, however, much of that stigma goes away. To most people, my pregnancy justifies my fatness. After all, people are supposed to gain weight throughout these nine months. They're supposed to love their stomachs and appreciate the wonders of their own reproductive system. And anyway, they'll probably lose much of their new fatness once the baby is born and they have time to become their "old selves" again.

The hitch in this narrative, however. is that my "old self" was still fat.

There are a few socioculturally ingrained fat biases at play here. When you're pregnant and fat, your weight is given a pass simply because so many people love babies. And to a degree (albeit not quite as intense a degree), many people love pregnant women, too. We are attracted to their bellies so much so that we cannot resist touching them ourselves. Heck, we don't even ask permission to do so, most of the time.

If a woman is fat and child-free, however, we aren't taught to think of it as "cute." Instead of cooing over ladies' baby bumps, we look at women's protruding stomachs and think that they signify laziness and a lack of self-control. The stomach, in particular, is the part of the body that we're conditioned to consider a "problem area," because they're the most indisputable evidence of fatness: And overall fatness, as most of us know, is never deemed sexy.

I genuinely prefer the way I look and feel when I'm heavier. It took me a long time and a lot of self-work and self-care to admit that fact. But I got there in the end, and I want to be able to show the same kind of love for my fat, non-pregnant figure as I'm seemingly allowed to for my fat, pregnant one.

Although I do believe my body's natural base line is fat, I genuinely prefer the way I look and feel when I'm heavier. It took me a long time and a lot of self-work and self-care to admit that fact. But I got there in the end, and I want to be able to show the same kind of love for my fat, non-pregnant figure as I'm seemingly allowed to for my fat, pregnant one.

Personally, though, I want to embrace my non-pregnant big belly, without being judged for it. I want to be able to tell people that, yes, I genuinely think my fat stomach is beautiful without having to hear about how "weird" or "unhealthy" or "unacceptable" I am for thinking as much. I want to post pictures on the internet that aim to de-stigmatize the myriad ways tummies can look when not-pregnant, without being told that I am disgusting and deplorable.

Although it's nice to not be shamed for my fat, pregnant stomach for a change, I cannot help but feel distressed by the hypocrisy of it all. It's wonderful to talk about the beauty of the pregnant form and to include fat bodies in that conversation, yes. It's not so wonderful to celebrate the fat, pregnant form one moment, and that condemn the fat, not-pregnant one the next.

I want to embrace my non-pregnant big belly, without being judged for it.

I know that "moving past" fat shaming isn't something that happens overnight. But I do expect people to have the ability to interrogate their feelings: To ask why a fat, pregnant body is socially acceptable, but a fat body alone is not. And therein lies the solution — which, really, is as simple as tolerating all bodies, in all their potential states, at all times.