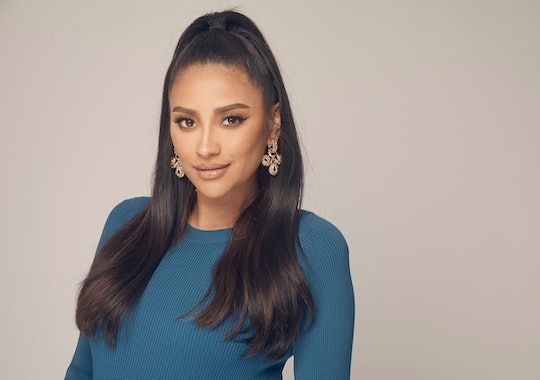 It's been roughly a month since Shay Mitchell became a mom and the Pretty Little Liars star just revealed one very relatable aspect of her parenting style. As it turns out, the actress is a pretty regular mom, at least in one silly way, as Shay Mitchell's new photos of her baby girl, Atlas, reveal she can't resist a solid mom joke opportunity, even if they're not that cool. And this mom is here for it.

Mitchell and her boyfriend Matte Babel welcomed their first child together on Oct. 21. Little Atlas came into the world after months of her mother sharing her journey with millions of social media followers on her YouTube channel, Almost Ready. At the time, the expectant mom got pretty real about even her most uncomfortable experiences, like the fact that she had to wear a diaper while on a film set because she had to pee a lot and the washroom was simply too far.

While I suspect her followers will be able to expect more deeply personal revelations about parenting now that Atlas has arrived, perhaps they should also expect the occasional mom joke. Like the one she shared on Instagram on Monday evening with a photo of her baby girl in an adorable bear onesie flying on a plane.

"So cute it’s unBEARable (mom joke)," she wrote on Instagram.

Is it just me or does it look like Atlas is rolling her eyes at her mom's joke already?

The Dollface star was flying with her little girl to meet her grandmother, according to the Daily Mail, and one can only hope that her grandmother is also full of mom jokes. Sometimes a new mom needs a veteran to really help her ease into things, you know?

Speaking of reaching out to experienced moms, it seems Mitchell has one fellow mom she can reach out to if she's struggling or needs to vent: fellow Pretty Little Liars star Troian Bellisario, who is mom to 1-year-old daughter Aurora. As Mitchell told Entertainment Tonight, Bellisario was the first of her former co-stars to meet her daughter. "She has been the person I've gone to for the most advice, obviously having a daughter of her own," she said. "But the other girls will definitely be meeting her soon."

If the idea of two chic celebrities like Troian Bellisario and Shay Mitchell sitting around cracking mom jokes doesn't make you smile, I just don't know what will.