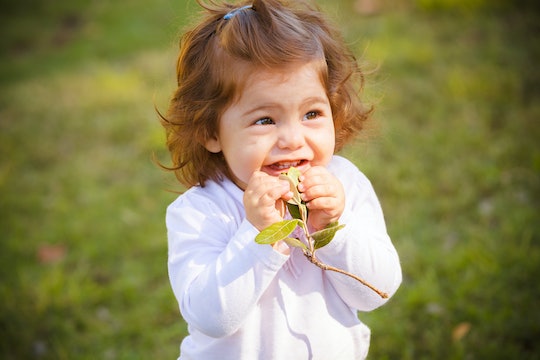 It Sounds Weird, But Here's Why Summer & Long Sleeves Actually Work For Your Baby

My skin is pale for 365 days out of the year, except for when it even gets an inkling the sun might be shining somewhere in the general vicinity. Then my skin turns to a bright shade of angry red that blooms with pain if it so much as dusts the fabric of my clothing. Naturally, I worry about my children's skin regardless of the fact they are anything but pale. I lather them in sunscreen like a corndog being dipped in batter. But you can't do that with babies. So should babies wear long sleeves in the summer to protect them from the evil glowing orb in the sky?

As is the case in almost everything, when it comes to sun protection and your child, the best thing you can do is avoid the sun entirely. According to Avail Dermatology, "For babies younger than 6 months, sunscreen is not advisable. That means they should be kept out of the sun, period." But let's be honest — that's not always feasible. Chores need completing, older kids need supervision — the list of reasons is long. The website suggested that barring the complete abstinence from the sun's solar rays, try to keep your baby in the shade as much as humanly possible, going so far as to travel with canopies and umbrellas. If you can't do that, Avail advised to dress your babies in protective clothing that covers their skin, like sun hats, long sleeved shirts, and pants.

It's frustrating, I know. But there just isn't the data out there to support the use of sunscreen in babies under 6 months old. Mercedes E. Gonzalez, MD from the University of Miami told the American Academy of Dermatology summer meeting that "nothing magical happens" at the six-month point in a baby's life, but that the control groups for sunscreen also don't include babies younger than 6 months. Meaning no data exists to definitively say one way or the other if sunscreen is safe for babies under 6 months.

The damage of being in the sun, however, is cumulative. You might be wondering what the harm is in a little heat, or how bad it is to be burned once or twice during your childhood. I mean, you survived, right? It can't be that bad. Dr. R. Todd Plott, a board-certified dermatologist in Fort Worth, Texas, disagrees and noted on his blog that "many times, adults end up with a series of skin cancers linked to a bad summer where they burned time after time. In their youth, it didn’t seem so bad. Now, those sunburns turned into rapid-fire cases of cancer such as basal cell, squamous cell, or even melanoma. Preventing those burns early on prevents the cancer." That's pretty scary stuff, and it's enough to make you reconsider every instance of burn you experienced as a kid. (I'm internally shaking my fist at my very deep-olive toned mother who didn't know how to cope with her translucent child. One more dollar for the therapy jar, Ma.)

Plott went on to note that parents need to "dress for sun protection." And that you should "protect the face from sun exposure with a hat," and that you may "consider long sleeves during outdoor time." I'll admit, my '90s kid brain has a hard time wrapping itself around that much clothing outside. I mean, most of my summer pictures feature me nearly naked as a baby hanging in my backyard. However, when we know better, we do better, and that includes clothing.

So should babies wear long sleeves in the summer? Keyvan Nouri, M.D., chief of dermatology services at Sylvester Comprehensive Cancer Center/University of Miami Hospital and Clinics, says yes. He wrote in the news of the Skin Cancer Foundation that it's "best to dress your baby regularly in a brimmed hat and lightweight clothing that fully covers the arms and legs." He also added that they should be wearing sunglasses as well, and you should even be proactive in the car. "Car rides can lead to unintended sun exposure, too. While glass screens out most UVB rays, the chief cause of sunburn, UVA rays, can penetrate windows," Nouri said.

Luckily, there are a ton of cute clothes on the market to keep your baby safe and cool. Most of them have zippers as well, so they're not only safe, they're easy to change. Because let's be honest, you don't need anything else to worry about when it's 95 degrees Fahrenheit outside and everything is burning.