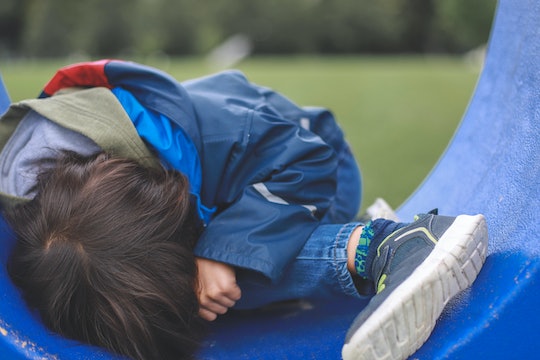 Should You Ever Interfere If You Think A Parent Is Being Too Harsh?

You’ve probably been in situations where you see a mother plunk her child into a car seat with a little more force than necessary, or a frazzled dad yelling at his kids to “Stop it!” in Target. Most of us have seen this type of behavior, and most have also been this type of parent or caregiver at times when we’re especially tired or stressed. But what if you’re seeing behavior that goes beyond the typical “loss of patience” and veers in potentially dangerous territory? When, if ever, should you ever intervene when you see a parent being harsh with a kid?

“I believe that it is appropriate to intervene when you see a parent or caretaker being overly aggressive, physically violent or verbally abusive," Kirsten Brunner, MA, LPC, a maternal mental health specialist, tells Romper. She says it’s also important to intervene if you’re witnessing neglect, such as when “the kids have been left alone in a hot car, or look like they are not being fed or adequately cared for.” It’s likely that any behavior you're seeing in public is only magnified behind closed doors.

“Young children are unable to advocate for themselves, so I believe that it’s important that community members speak up (and not look the other way) when they see parenting behavior that is dangerous or outright abusive,” Brunner says. It can be difficult to intervene however; you may feel awkward or afraid of how the parent or other bystanders will react.

“Others may not be brave enough to intervene but are thinking someone should get involved,” Folusho Otuyelu, an assistant professor of clinical social work, told The New York Times. Once you’ve made the decision that you should say something, it’s a good idea to try to speak as calmly as possible; you want your tone to be one of genuine concern, not judgement or confrontation.

You could try saying, “‘Hello, I don’t mean to get into your business or tell you how to parent, but I noticed that... ’ and fill in the sentence with what you observed," Professor Otuyelu suggested. And if you don’t feel safe saying something directly to the parent, “you can alert the authorities. This might be finding a security guard or police officer, or calling 911,” Brunner says.

Intervening because you feel a child is in physical or emotional danger is a much different situation than “parent-shaming,” however.

“Anyone who has parented young children knows that there are those moments when you find yourself in public and you have to be quite firm with your children. Those moments when you look and feel like you are seriously about to lose it,” Brunner says. In those cases, she thinks intervention looks quite different, and if it happens at all, it should be in the form of help or encouragement.

Brunner suggests offering help by saying something like: "Can I load your groceries on the belt so you can tend to your little guy? I have two boys myself and I know how hard it can be."

"Maybe you can smile and let [the parent] know with your eyes that you can absolutely relate, that you have been there," Brunner says. "In these cases, looks of judgment or harsh words are not helpful. The parent needs reassurance, encouragement and possibly help.”

And if a toddler seems distressed in public, it could be for a myriad of reasons (maybe their nanny stepped on their imaginary friend’s hand, as I once cruelly did in my nannying days).

“There are different levels of emotional distress,” Brunner tells Romper. “Almost all toddlers and preschoolers are emotionally distressed at times. However, if a child seems fearful or appears to be emotionally beaten down, this might warrant a closer look.”

Intervening can be especially tricky when you're witnessing parenting you don’t agree with by a friend or family member with whom you otherwise feel aligned.

“Before confronting your friend, I think that you should do some thinking about where your concern is coming from. There are many ways to parent, and just because your friend isn’t doing it your way, doesn’t mean that their method of parenting is wrong,” Brunner says.

However, if you can’t shake the feeling that something is dangerous or neglectful (say, your friend doesn’t put their child in a car seat or constantly calls their child names) it's probably appropriate to calmly confront your friend.

“If you have a super close friendship, and your friend usually appreciates your feedback, they might be open to hearing your thoughts. You can offer your feedback by explaining that your perspective is just one perspective, that you realize parenting is the hardest job there is, that you’ve learned some parenting tools that might be helpful to her, that sometimes it is easier to see issues when you are on the outside looking in. If your friend is receptive, you can go from there,” Brunner says.

But if your friend’s behavior does not change, and you don’t feel the situation is dangerous enough to involve the authorities, you may have to walk away from the friendship.

“I once needed to end a friendship because I couldn't stomach the behavior of my friend and her husband toward, and in front of, their kid,” Romper’s resident advice columnist, Jenny True, said in a recent article. “Was it judgmental of me? Absolutely. I thought they were Bad Parents. I still do. But it upset me for many years, so finally, after attempting to address the situation, I walked away.”

You may feel concerned or guilty about hurting someone's feelings (friend or stranger). But remember, if you truly feel like a child is in a dangerous situation, you'll only feel more guilty if you stay silent.

More Like This
17 Best Potty Training Products For Toddlers
From Captions To Gifts, These Are All The Kindergarten Graduation Ideas You Need
These High School Graduation Speeches Will Give You Hope For Our Future
Fun Ways To Celebrate National School Nurse Day