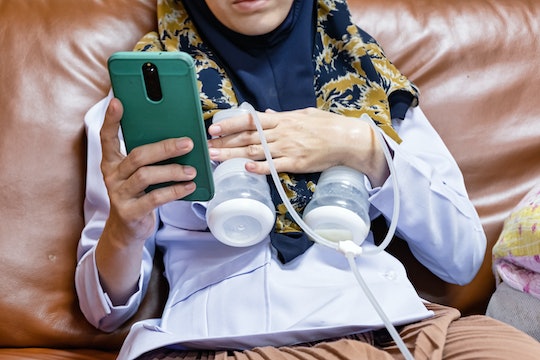 Do You Really Need To Pump & Dump After Eating Peanuts?

When you’re a nursing mama, you know that everything you eat, your baby eats, too. It might be something as simple as a salad, or as sinful as ice cream. But when it comes to foods that can cause an allergic reaction, (we’re looking right at you, peanuts), you may hesitate to chow down on foods that you once loved. Should you pump and dump after eating peanuts? You might worry that the PB&J you just ate may somehow affect your breastfeeding babe.

The answer is a resounding (and relieving) nope. “Nursing moms do not have to worry about pumping and dumping after eating peanuts,” Dr. Kathleen Dass, an allergist immunologist at Michigan Allergy, Asthma & Immunology Center, tells Romper. Previous guidelines existed that warned parents to put off giving kids peanuts for as long as they could, but not anymore. “This dates back as recently as the year 2000, when the American College of Pediatrics recommended avoiding peanut until the age of 3,” says Dr. Dass. “It was also recommended to have a strict avoidance of peanuts, tree nuts, egg, milk, fish, and other allergenic foods in mothers who were breastfeeding their infants to prevent food allergy.”

As it turns out, early exposure to peanuts can help prevent allergies, not produce them. New studies have shown that introducing peanut (or any food allergen for that matter) decreases the risk for developing a food allergy. A landmark study called LEAP (Learning Early About Peanut Allergy) found that introducing allergens earlier helped to reduce the risk by 81 percent in comparison to a test group that avoided peanuts altogether, according to FoodAllergy.org. Furthermore, the study found that there were very low rates of peanut allergy in Israel. “It was observed that children in Israel start eating peanut as early as 7 months in the form of Bamba, a peanut butter and corn snack,” reports Dr. Dass.

That’s why the new recommendation is for parents to begin introducing peanuts into their babies’ diets much earlier than you might expect. In fact, parents should begin including food that contains peanuts around 4-6 months old, when your baby begins eating solids, the Food Allergy Research & Education found. That said, early exposure to peanut doesn’t automatically guarantee that your baby will be peanut allergy-free, but it can reduce her chances of having it. And if your child is showing sensitivity to peanuts, has eczema, or an egg allergy, parents should try to give peanuts under the guidance of a doctor and/or allergist, the National Institutes of Health recommended.

There’s a good reason to fear the mighty peanut. Although it’s one of the most common food allergies, it’s also one of the most dangerous, and can cause anaphylaxis, a life-threatening allergic reaction. Some kids are even allergic to peanut smells in the air. Allergies to this legume (a peanut, ironically, isn’t a nut at all), have risen 21% since 2010, and about 2.5 percent of U.S. children might have a peanut allergy, the American College of Allergy, Asthma & Immunology found.

Even if your baby has shown no signs of having an allergy, you might be wary (and rightly so) about how long peanuts will stay in your system for after you’ve eaten it. “Food proteins appear in the milk within 3-6 hours of the mother eating them,” Andrea Tran, an RN and an IBCLC, tells Romper. “However, when eliminating a food we tell moms to give it a full two weeks for the protein to clear from her milk.” So if you do decide to pass on the peanuts for whatever reason, it’ll take up to 14 days for it to clear your system.

It seems like food allergies are everywhere these days, and you can barely go a day without hearing some kind of horror story about the ones (like peanuts) that can cause anaphylaxis. The good news is that while allergies to peanuts and tree nuts can often be a lifelong issue, some kids do outgrow it over time. In the meantime, you should consult your child’s pediatrician if you see any telltale signs of a food allergy, such as hives, swelling, wheezing, eczema, or a tingly or itchy sensation in the mouth, according to The Mayo Clinic. And if you have any questions about when or how to introduce a food allergen early into your child’s diet (either by breastfeeding or oral feeding), consult your doctor.