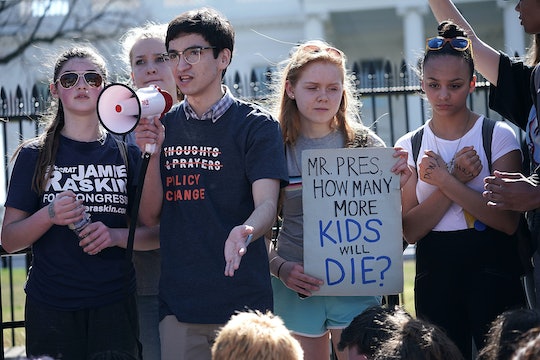 Last month, a gunman opened fire at a high school in Parkland, Florida, killing 17 people and injuring dozens of others, according to news reports. The fatal mass shooting had left the community reeling, but also galvanized the teen survivors into action. Since the bloody incident on Valentine's Day, a group of students have organized protests demanding action on gun violence prevention. Part of those protests include a series of school walkouts, some put on by other activist groups, that are happening nationwide. And the signs from the National Walkout Day this week show just how powerful anger can be in propelling change.

On Wednesday, thousands of students across the country walked out of their schools at 10 a.m. in their local time zones to pressure lawmakers into taking action on gun safety measures, according to the New York Times. The date of the nationwide protest, organized by the Women's March Youth EMPOWER group, is of particular importance: It's happening a month to the day of the mass shooting at Marjory Stoneman Douglas High School in Parkland, Florida. And many of the signs seen at the marches capture the vulnerability, anger, and fear this country's youth live with every day because of the gun violence epidemic.

The National Walkout Day called for students to leave class and their school building for 17 minutes, with each minute representing each victim of the fatal shooting at Stoneman Douglas, according to ABC News. But many of those participating in the marches, including preschoolers and first graders, have stayed in the streets for far longer, ABC News reported.

So far, over 3,100 school walkouts have been organized and registered across the country and even around the globe, according to the EMPOWER website. Youth in Florida, Indiana, Illinois, Maryland, Missouri, New Jersey, New York, Virginia, Washington state, and the District of Columbia, among more than a dozen other states have walked out of class Wednesday. And the march has gone international: Students in Colombia, Israel, Tanzania, Mexico, and the United Kingdom have also staged walkouts in solidarity with the teen survivors and students in the United States, according to CNN.

Corporations have also come out in support of the students protesting gun violence and inaction on gun safety measures. Viacom Networks, such as MTV, BET, Comedy Central, and Nickelodeon, suspended regular programming for 17 minutes at 10 a.m. Eastern Time "to show solidarity with the school walkout," according to the Daily Beast. Nickelodeon, for example, aired a title card at that time that read, "In support of kids leading the way today, Nickelodeon will be off the air until 17 minutes past the hour," according to a screenshot posted by the Daily Beast.

Activists, including the survivors of the Parkland shooting, have four demands for Congress, according to the Women's March website:

But these demands don't end with Wednesday's National School Walkout. The teen survivors of the Parkland massacre have organized the massive March For Our Lives rally that will take place on March 24 in Washington, D.C. Hundreds of thousands of people, including celebrities, are expected to attend the march. And hopefully the sheer number of Americans fed up with gun violence and kids dying in schools and on the streets will finally spur lawmakers into action.