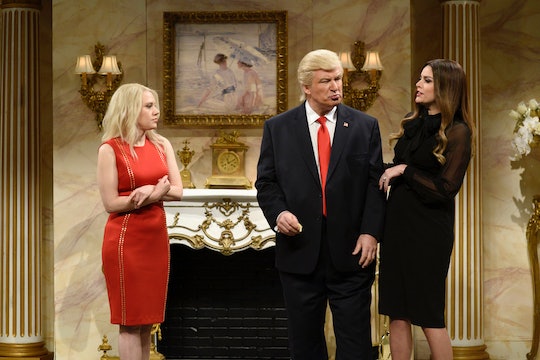 There was no way Saturday Night Live was going to air its latest episode without fitting in something about couch-gate, a.k.a. that time Kellyanne Conway sat on the couch in the Oval Office like it was her best friend's living room. And when SNL mocked the Kellyanne Conway Oval Office couch photo, viewers were all over it.

Not only because Kate McKinnon does a perfect Conway, but also because of the way Conway popped up randomly throughout the episode. First, it was in the cold open Forrest Gump parody skit on SNL when McKinnon's Jeff Sessions held up the famed photo and then proceeded to replicate that pose throughout the episode. It was like a "spot the Kellyanne" game and was almost better than a skit about her as a whole.

The issue started when people freaked out over the real life photo of Conway sitting in the Oval Office, inciting outrage and just curiosity over the fact that she was super informal in the president's office at the White House, during an important meeting no less. Conway alternated between taking photos on her personal cell phone and becoming engrossed in her phone, all the while with her legs tucked under her in a super casual way. It was a puzzling moment for sure and one that McKinnon's Conway took full advantage of throughout SNL on Saturday night.

McKinnon's Conway showed up once again on SNL when she was seen at the end of 'Weekend Update,' sitting on top of the desk and texting, much like the now-famous photo. Viewers were all over it of course and obviously just wanted more.

In the past, McKinnon has portrayed Conway in plenty of SNL skits, making her portrayal of President Trump's former campaign manager one to look forward to almost as much as her portrayal of Hillary Clinton. Like the time she played Conway in the Chicago "Roxie" parody on SNL or the Fatal Attraction spoof that starred McKinnon as Conway. Obviously the next logical step would have been for a SNL skit all about Conway on the Oval Office couch, but trying to spot Conway on the couch throughout Saturday night's episode might have been more fun to watch.

There's no doubt that McKinnon's portrayal of Conway has been amazing so far and as long as the real life version continues to boggle our minds, McKinnon will find ways to bring her antics to life over and over again.