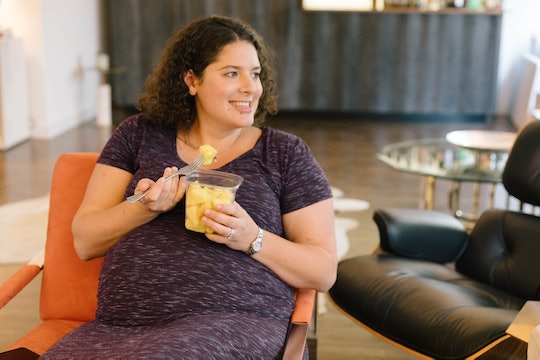 Sorry, But I'd Rather Eat These 10 Things Than My Placenta

When I was in high school, the morning radio show I listened to had a gimmick where the host, Twisted Sister's Dee Snider, would become a "cannibal" by eating human flesh. OK, technically he was eating a donated placenta. This was back in 2000. Now every other mom in Brooklyn seems to be encapsulating , pureeing, or finding some other way to consume this temporary organ for its purported health benefits. My reaction is the same as it was 17 years ago: "You do you, but no thank you." There are so many things I would rather eat than my placenta.

It's not that I'm grossed out, but I just don't see the appeal. I saw my own after the birth of my daughter — the nurse's description of "a giant raw steak" is pretty accurate, and I don't find steak too appetizing, either. Like, if someone presented me with a beautifully plated serving of placenta I'd try it, but I'm not going to go out of my way for the experience. Kind of like venison or liver: I've tried both a few times, I just don't like them, and if it's up to me I'll not try them again. Still, if I were at someone's house and they made it I wouldn't refuse what I was given.

Furthermore, I've yet to hear a truly compelling argument to eat my placenta. Anecdotally I know a lot of women who have extolled its benefits — better mood, better milk production, effective at warding off postpartum depression — and I believe them. (After all, even if their positive experience was merely a result of the placebo effect, the placebo worked.) But I don't believe we have seen the science to back up such claims as a universal truth. Not yet, anyway.

I also have to laugh at the idea because some of the people I know who have eaten placenta will not try something as innocuous as tapioca pudding or the dark meat of chicken. Why? Because "It just seems gross." Really? Girl, you ate something that came out of your vagina. Not that vaginas are gross, but humans don't typically eat anything that comes out of our bodies, so your squeamishness is looking mighty arbitrary right about now.

Look, if you want to put your placenta in a pill or blend it into a nutrient-packed health drink, be my guest. But there's a long list of items I'd rather consume to get me through postpartum life, including the following:

More Like This
Does The FDA's Plan To Limit Lead In Baby Food Go Far Enough?
What Foods Fight Nausea During Pregnancy?
Is Raspberry Leaf Tea Safe To Drink During Pregnancy?
22 Cute “Y” Names For Baby Boys
What Parents Are Talking About — Delivered Straight To Your Inbox