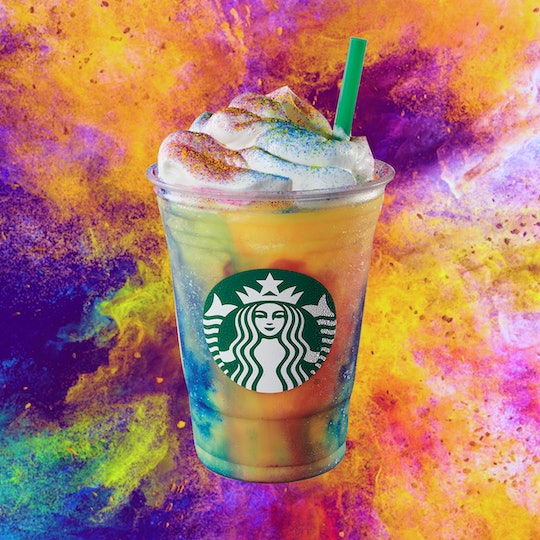 If you're looking for a way to feel super groovy this summer, Starbucks has you covered. For a limited time only (just days, people), you can sip on a rainbow-swirled Starbucks Tie-Dye Frappuccino and savor the sweet flavors of summer while supplies last.

The summery spectacle gets its rad primary colors from red beets, turmeric, and spirulina, according to Starbucks. You may already be familiar with the health benefits of beets and turmeric, but did you know that spirulina is also packed with nutrients and antioxidants? According to Healthline, spirulina also has connection to NASA, as astronauts proposed growing it in space back in 1988, causing an increase in the product's popularity. This summer marks the 50th anniversary of the first moon landing back in 1969, an era when tie-died everything reigned supreme, so the space program connection of this ingredient is either a happy accident or Starbucks drink designers are just as creative as can be.

The Tie-Dye Frappuccino promises to transport you to a tropical hippie paradise when you sport this summer's ultimate Starbucks accessory, and they're on sale now in the United States and Canada. Whether your typical go-to order is a venti, extra shot, double pump, upside down Caramel Latte, or you tend to go the more chill route with a Teavana Green Iced Tea, you're going to want to deviate for just a hot second and try this far-out frap.

Just like previous limited edition Frappuccinos, Starbucks will only be serving their Tie-Dye Frappuccinos while supplies last. Remember the illustrious Unicorn Frappuccino? My sister-in-law and her daughter drove all around Houston hunting the mythical drink before it disappeared from our lives forever, finally finding a Starbucks inside of a Target store that still had ingredients left to make one just two days after the release of the gorgeous confection. When Starbucks says limited, they mean limited. So, what are you waiting for? Go get your groove on before it's too late!