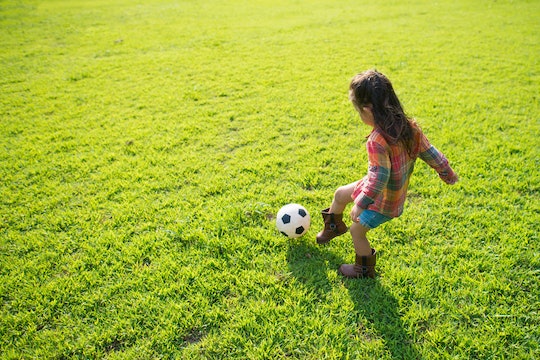 The term "tomboy" was coined back in the sixteenth century to describe "rude and boisterous" boys. Eventually, the term evolved into a description for girls who are not stereotypically 'girly' and whose interests and hobbies are considered more typical of boys than of girls. But in today's world, where gender fluidity is increasingly more accepted and recognized, and where girl power is gaining new heights, it's definitely time to admit "tomboy" is problematic and to let it go.

As a child I climbed trees and scraped my knees and played baseball with my friends. I raced bikes and fell into ditches and dug in dirt and roasted potatoes in the ground. I collected bugs, learned Aikido, and immersed myself in science books. I loved being a kid. I loved doing everything I was "allowed" to do, and everything I wasn't, and I never considered any activities to be limited to just boys or to just girls. It wasn't until I was older, a pre-teen, that I realized there was a difference in the way society treats boys and girls. I didn't think I was anything but a regular kid, but apparently I was a tomboy. I was not as "girly" or "feminine" as I was "supposed" to be.

Sometime around seventh grade, and after a brief dabble in grunge (I miss you, Kurt), I decided being a so-called "tomboy" wasn't the way I wanted to be known. I was a girl, I liked boys, and I heard that boys don't like tomboys. (No, I wasn't very progressive as a teenager.) So, I distanced myself from the "boy things" I loved as a child. I stopped playing baseball in the grass. I quit martial arts because my parents insisted it would give me a "masculine physique," and I started wearing makeup. I traded in my sneakers for wedges and my jeans for mini-skirts and dresses. My oversized t-shirts and plaid shirts gave way to tube tops and halters. I was feminine, and acting the "right way," or at least the way everyone expected me to act. The thing is, I never felt "wrong" when I didn't dress quite as "feminine," either. I felt perfectly fine being true to my natural self. And that's when I realized that I wasn't the problem. Everyone else was.

I felt perfectly fine being true to my natural self. And that's when I realized that I wasn't the problem. Everyone else was.

Now that I have a daughter, I am even more hyper-aware about the ridiculous standards the society we live in has for little girls. One day, my daughter came home and told me that boys are better at sports and understand math better than girls. After a brief moment of being floored that a 6-year-old child had already been inundated with these damaging and problematic notions, I told her that kind of rhetoric was wrong. I informed her boys and girls are able to do whatever they want, equally, and the idea that she is already a step or two behind the boys in her class simply because she's a girl is, and always will be, preposterous.

And then, just last year, we had the following conversation:

My daughter: Mom, what's a tomboy?

Me: An archaic word for girls who didn't succumb to society's expectations of "girly."

My dauther: Am I a tomboy? Someone said I'm a tomboy.

Sometimes I'm winning the battle, but I'm terrified of losing the overall war.

According to The Atlantic, some people today already believe that “tomboy” is an antiquated term, because some (although, not all) are "free to explore their gender expression beyond traditional femininity." Furthermore, if our culture's "understanding of girlhood is no longer exclusive to being 'girly,' is a tomboy a tomboy anymore, or just one way of being a kid?" Which is exactly what I told my daughter, "No, you are not a tomboy, you're a kid."

But the term tomboy has many negative connotations. When people call my daughter a tomboy, they are telling her she isn't feminine enough to be a "real" girl, whatever the hell that means. She's being told that she doesn't fit the "mold," whatever that mold is. She's hearing that her absolutely normal kid-like interests are masculine rather than feminine, which means something must be "wrong" with her. They are telling her that if she wants to be a "true" girl, she should not run around the playground, scraping her knees, and playing tag.

So, it's time to put tomboy to rest. It's time to call little girls what they are: kids. They're just kids.