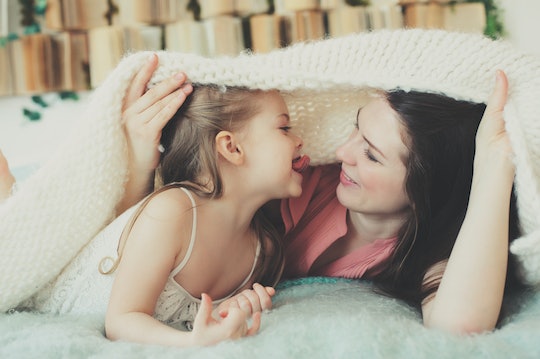 Stop Telling Me I'll "Hate" Having A Teenage Daughter

It's amazing how fast kids grow up. They're like rapidly evolving aliens that go from clueless, adorable blobs to cunning, agile creatures in the blink of an eye. But every now and then I hear about this phenomenon that unsettles me, and it usually comes from my fellow girl moms. "I saw some teenage girls the other day," an acquaintance said recently. "I cringed to think that I have to deal with that soon." This was rejoined by a chorus of agreement. My heart sank, and I immediately felt compelled to speak in defense of our future teenage daughters.

This disdain for teenagers in general, and teen girls especially, is nothing new and not uncommon. Teens, we are told, are lackadaisical, entitled, whiny, and obsessed with their phones. Yet, for the past 15 years I've worked in some capacity or another with teenagers from all walks of life — from at-risk gang members in Los Angeles to privileged kids from some of the wealthiest towns in America and everything in-between — so I feel I can say with confidence that teens are fascinating, interesting, and on the whole pretty awesome. They're entering a time in their lives where they're figuring out who they are and doing what they can to assert themselves in this glorious mess of a world. I've yet to encounter one who didn't respond positively to encouragement and intellectual engagement. Moreover, I've not met a single teenager who didn't want to learn from the adults in their lives (or at the very least didn't learn from us in spite of themselves).

Are teenagers perfect? Of course not. Like all other children (because let's not forget, as we often do, that teenagers are still children) they come with their own unique set of challenges. Their brains are going through some absolutely bonkers (yet developmentally normal) things that make moodiness, bad decisions, and general chaos all too common. Like all people, some of them are just naturally irritating. They're not angels, but one shouldn't have to be an angel to be treated with kindness and respect.

I rarely see parents gird their loins for teenage boys when their sons are still a decade or more away from their teenage years.

That's our problem with teenagers in general — I suspect a lot of the vocal disquiet is an attempt to undermine children on the cusp of adulthood because we're uncomfortable with their burgeoning independence. But when it comes to gender specific dynamics and expectations, teenage girls are perceived and touted as even worse. Because in addition to everything I've mentioned, they're also seen as overly-emotional, and catty, and shallow, and deceitful and... actually, I don't have to tell you all the negatives associated with teenage girls, do I? Because you know them. The trope is so well-established that it has become synonymous with "teen girl." The result? I rarely see parents gird their loins for teenage boys when their sons are still a decade or more away from their teenage years.

Sure, there might be the off-handed comment about how teenage boys make for huge grocery bills or big messes but that's basically it. That's not to say that gender stereotypes don't hurt everyone, but "ha ha boys are messy" is just not the same as "girls are catty b*tches who are constantly stabbing each other in the back." The former is a goofy if stupid ribbing, but the latter, even when it's joking, is mean-spirited and is usually colored with the very serious belief that teenage girls (and having teenage daughters) are terrible.

Our society's derision toward teenage girls is often bubbling away in our brains and the minute we perceive an iota of confirmation we jump on it.

And this all starts young, too. I've literally heard people genuinely bemoan having a teenager daughter before the baby was even born. Joking about the "inevitable" drama that comes along with a female child. Genuinely worrying that mothers and daughters cannot get along. Consciously and unconsciously preparing for an adversarial relationship. Our society's derision toward teenage girls is often bubbling away in our brains and the minute we perceive an iota of confirmation we jump on it. The root of this problem (like oh-so-many others) comes down to misogyny. We hate teenage girls because we hate women, so much so that from the time they're little we make snide and forlorn comments about the perceived inevitability of our girls turning into them.

Moms: what are we telling our girls when we buy into this? What are we saying about ourselves when we speak so negatively about women and girls? How much better could our daughters' self-esteem be if we stopped? What would our relationships, not just with our daughters but with all women, look like then?

We hate teenage girls because we hate women, so much so that from the time they're little we make snide and forlorn comments about the perceived inevitability of our girls turning into them.

It's no wonder teenage girls experience a self-esteem gap relative to their male peers that is not bridged until old age. In addition to hearing all the things they're supposed to be (pretty, popular, thin, sexy but chaste but not prude, etc.) they're also hearing a whole lot of the things they are ("mean girls," vapid, self-absorbed, etc.) This insecurity has been shown to hold them back from everything from sports to raising their hand in class to reporting abuse.

How much worse to hear this from your own parents?

We've had important conversations in the past year. The Women's March. #MeToo. #TimesUp. These touchstones and others have highlighted the importance giving women a space to tell their own stories and hearing and believing those stories. Despite adversity, nevertheless, we persist. We are assured that the future is female. Yes, this is a politically disheartening, terrifying, and challenging time, but I've taken tremendous courage in seeing all that is happening in response to the rise of bigotry and hatred. We know, with an urgency that was perhaps lackluster before November 2016, that women's empowerment and liberation is tied to the empowerment of all, and that it is crucial for women to support other women.

Teenagers are still very much girls, but who they will be as women is going to be heavily based in what we teach them now.

But you cannot support women if you do not first support girls. Without practical application as soon as possible, all the hashtags and catchphrases in the world mean nothing at all.

Teenagers are still very much girls, but who they will be as women is going to be heavily based in what we teach them now. So if they see grown women deriding them, undermining them, and looking down on them, how are they going to view grown women? How will they expect they should behave towards girls and women when they're women? If they're indoctrinated to believe that the "Cash Me Ousside" girl is more typical of female teenage behavior than Nobel Peace Prize winner Malala Yousafzai, how can we ask or expect them to step up to their full potential?

Frederick Douglass once said: "It is easier to build strong children than repair broken men." The same goes for women. But this quote in and of itself perhaps dismisses how deeply ingrained breaking people often is in our society: we often don't even know we're doing it.

Our words and attitudes have power, so let's use it to create a world where self-assured girls grow up to become empowered women.

I've no doubt that the vast majority of the mothers who have lamented teenage daughters love their children tremendously. I'm certain they want their girls to grow up self-assured, independent, and happy. But misogyny runs deep, and it's internalized. When I've confronted women on speaking negatively about teenage girls, most of the time they counter. "Well, I know what I was like when I was a teenager." But when I ask, "Did you also hear negative things about teenage girls from the adults in your life?" the answer is always yes.

It won't be easy, not just because of how deeply embedded misogyny is in our culture, but because teenagers (probably due to that aforementioned independent streak) don't always let you know when they're listening much less absorbing what we're saying. But, as with all children, they're always taking it in. Our words and attitudes have power, so let's use it to create a world where self-assured girls grow up to become empowered women. Let's make a world where we can't wait until our daughters are teenagers.

More Like This
From Captions To Gifts, These Are All The Kindergarten Graduation Ideas You Need
Fun Ways To Celebrate National School Nurse Day
Explaining My Terrible Tattoo To My Kids Reminds Me Of What I Owe My Mom
I’m No Singer, But My Children Think I Am