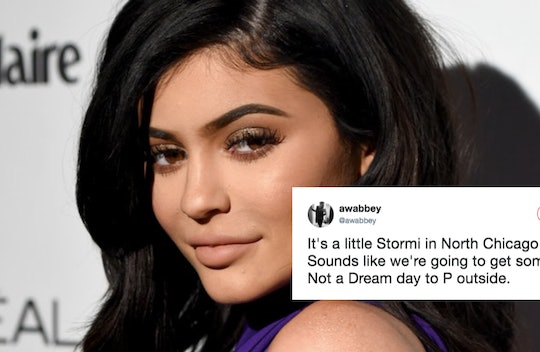 The world was forever changed on Sunday, and not because the Philadelphia Eagles beat the New England Patriots at the Super Bowl. Oh, no. The world was changed when Kylie Jenner announced she was indeed pregnant all this time and that she had already given birth to her daughter. And on Tuesday, she revealed her baby girl's name and Twitter is having too much fun with the reveal. In fact, all these Stormi Chicago tweets and memes prove that Kylie's choice of name for her daughter is already getting the internet's best jokes.

So, in case you missed it, Kylie's pregnancy was announced way back in September, although the reality television star and beauty mogul kept the world on its toes by not confirming any of those rumors, well, until now. Yeah, on Super Bowl Sunday aka Kris Jenner day, Kylie took to Instagram to release an explanation of why she had chosen to keep this part of her life on the down low. "I'm sorry for keeping you in the dark through all the assumptions," she wrote. "I understand you’re used to me bringing you along on all my journeys. My pregnancy was one I chose not to do in front of the world." But now, Kylie has revealed all, including her daughter's name, and it's something.

In another Instagram post on Tuesday, Kylie shared a sweet photo of her baby girl grabbing onto her thumb. The pink-toned photo was seriously adorable, but it's Kylie's caption that has people talking. "Stormi," was all she wrote, alongside the angel emoji. Clearly, this was Kylie's way of announcing her baby's name, and people had thoughts, y'all.

Mainly, though, people were seriously confused as to why the Kardashian-Jenner family seems to love weather and direction-based names so much. After all, Stormi's cousins currently include North, Chicago, and Reign. So, yeah.

People Had A Lot Of Weather Jokes

The thing is, all of the Kardashian-Jenner family members with kids tend to choose unique names for them. Kourtney Kardashian might have two of the most expected baby names for her older children, Mason and Penelope. But when Kim announced she was naming her first daughter North, the bar had been raised.

And while it certainly isn't a competition about who can name their baby the most creative name, Kylie is definitely putting herself out there with her name choice. And while internet sleuths attempt to uncover the meaning behind Kylie's baby name, some Twitter users were just keeping the jokes coming.

Most People Were Just Surprised At The Name

Clearly, people were kind of expecting Kylie to choose a more unique name for her daughter, but they probably weren't expecting Stormi. After all, there was actually a rumor going around that Kylie was naming her daughter Posie (short for Mariposa, which is "butterfly" in Spanish). So when Stormi was announced, the reaction memes and tweets were in full effect.

Name jokes aside, congrats, Kylie! You're sure to be a great mom and Stormi is lucky to have you.