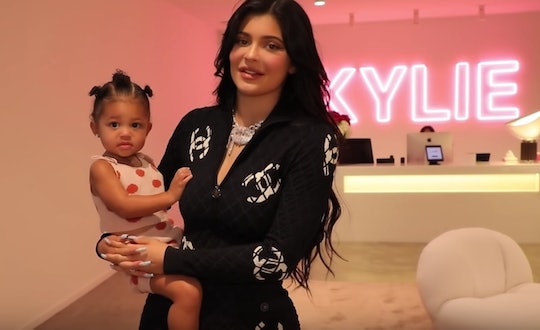 In a few short weeks, the world will get to see Stormi's collaboration for Valentine's Day with her mom Kylie Jenner. Yes, a 23-month-old toddler is part of a new line for Kylie Cosmetics and, of course, it already looks like it'll be a hit.

Stormi, who will turn 2 years old on Feb. 1, is apparently already working on her first cosmetics collection. On Thursday, Jenner shared a photo of Stormi on Instagram featuring her daughter sitting around a table looking over a spread of brightly colored swatches for her first Kylie Cosmetics collaboration. In the photo, mockups of pink boxes with Stormi's name on them and pastel butterflies can be seen scattered throughout the table, along with a mockup for a warm toned eyeshadow palette and purple lip product.

"Coming soon..," Jenner captioned the photo. Over on Kylie Cosmetics Instagram account, the company called this the "first collaboration of 2020."

Stormi looks like a little CEO-in-the-making. It's really no surprise, though, that she looks so confident at the business table. After all, Stormi has spent a lot of time in the Kylie Cosmetics offices and even her own room at its headquarters equipped with a crib and toys.

Needless to say, Jenner's fans are pretty excited for this collection to launch, whenever that may be and whatever it may entail. Jenner did not announce any official date for the collaboration or share what exactly will be included in it. But since it's the Valentines Day collection, it could be out by or before Feb. 14. Either way, people think that this might be her best collaboration, yet.

"The Stormi lip kit is toooo cute," one commenter wrote, while another said, "Wow can't wait to get them!" One more declared, "I NEED IT."

Stormi may be young, but it's clear that she's a fan of makeup. In fact, back in October, Jenner said in a video posted to her YouTube channel that Stormi is obsessed with it. "Stormi is actually super into makeup right now," she said. "Every time I'm wearing lipstick she notices and she's like, 'lip, lip, lip!'"

Stormi will now be able to see her mom (and others) wear the lipstick that she helped designed once her collaboration officially makes its way to the Kylie Cosmetics website. But something tells me this won't be Stormi's last collab with Kylie Cosmetics. After all, her mom has said in interviews that she works very hard for her daughter with the hopes of passing the business on to her one day. Only time will tell.