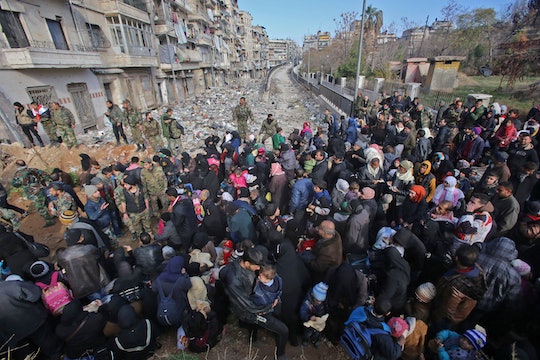 After more than five years of intense civil war between rebel groups and those who back the Syrian government, the country's army is poised to accomplish the major victory of reclaiming the ravaged city of Aleppo — where thousands of trapped civilians are still enduring relentless bombing and a fatal scarcity of resources in the eastern part of the once-thriving metropolis. Now, as it prepares to overtake the key area, the Syrian army is reportedly giving civilians in Aleppo the chance to escape and join the ranks of the millions the war has displaced, to avoid the same fate as the hundreds of thousands it has killed. President Bashar al-Assad insists that the next steps in Aleppo will prove a crucial turning point in fighting, but for the approximately 150,000 people still living there, it's most immediately an opportunity to simply survive.

Once, Aleppo was the metropolitan home of 2.5 million and Syria's commercial capital. Now, the eastern half of the city is under near-constant bombardments deployed in part by pro-government Russian warplanes, and those who remain there have become the de facto human shields of the tumultuous civil war. Recently, the Syrian army dispersed leaflets imploring anyone left there to get out, according to USA Today, which in part read,

This is your last chance — rescue yourselves. If you do not evacuate these districts soon, you will be destroyed. We have left a safe path for you to leave.

On Thursday, the BBC reported that the Syrian army had, in fact, "suspended combat operations" in the area, and Russian Foreign Minister Sergei Lavrov confirmed that "there [was] a large operation under way to evacuate civilians." Details of the humanitarian move are scarce, though — U.S. Secretary of State John Kerry met with Lavrov, a state department spokeswoman told the outlet, but the details of the much-needed, if likely temporary reprieve "are still to be worked out." The United States opposes Assad's government in the conflict.

In addition to having stopped operations in eastern Aleppo for the time being, representatives from the two countries have agreed to meet in Geneva, Switzerland, to discuss an agreement to end the fighting in Aleppo, Lavrov told Voice of America. According to the outlet, Kerry himself said he was "hopeful" about the two superpowers' ability to settle on terms for a ceasefire through diplomacy. Assad, on the other hand, has said he intends to fight until the conclusion of the war.

It's hard to imagine that the undoubtedly desperate and demoralized remaining residents of eastern Aleppo could consider the chance to leave their homes and embark on a new journey of dangerous uncertainty as unequivocally "good" news — even if the alternative of staying is much, much worse. In late September, United Nations Secretary-General Ban Ki-moon described Aleppo, which is now synonymous with unimaginable human suffering, as a "slaughterhouse," and the situation has only deteriorated, dramatically, since.

While life goes on in the largely pro-Assad western portion in the city, even if food is much more expensive and water must now be trucked in, as USA Today reported, the east is a desolate landscape of atrocities. Months ago, when there was some access to medical care, children had to undergo surgeries without anesthesia because it simply was not available. Physicians had to choose which patients would live and whose conditions were too dire to salvage. Families slept huddled in the same room, so they could at least die together when the bombs rained down.

"Most of the buildings are without doors and windows," physician Mohammed Kaheel told USA Today of the current conditions. "There are little kids dying from exposure. What should I describe to you? The hunger? The cold? The pain of the injured?"

A 7-year-old named Bana al-Abed, recently made homeless by the war, has been tweeting harrowing details of her ordeal along with her mother, serving as a recognizable symbol of the suffering of families in the city, though even her status is currently unknown (Bana's account was deactivated last weekend, following a push into the city by Syrian military forces, but according to The New York Times, some have questioned the account's authenticity altogether).

Despite the bluster about ushering civilians to relative safety by ceasing the inhumane bombardments, many analysts believe that the Russians and the Syrian government have actually adopted what amounts to torture of the civilians as a viable military strategy, as The New York Times reported in September. Columnist Nichola Kristof summed up the savagery in October, shortly after Bana started tweeting:

Russia and Syria appear to be deliberately targeting civilians like Bana. The aim seems to be to bomb and starve civilians into exhaustion and submission, so that they flee or no longer support the opposition, or else support extremists regarded as better fighters. That would bolster the Syrian government narrative that the opposition consists of terrorists who must be fought.

In the midst of this, one question lingers: Does the agreement to pause the fighting now, as this side of the conflict nears a crucial victory, indicate that, for them, these beleaguered people — 800 of whom have died in just the past 26 days, according to Reuters — have served their purpose?