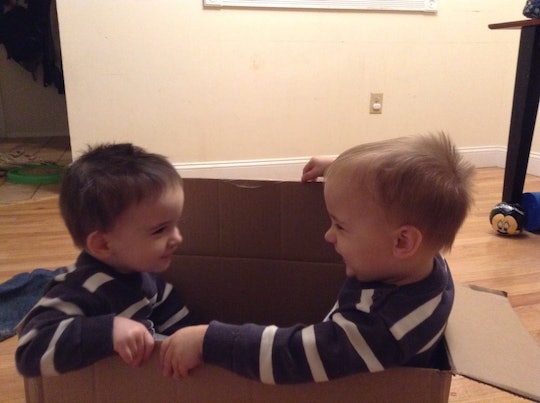 Teaching My Sons About Their Anatomy Totally Backfired

Like lots of kids my age, I grew up identifying my body parts with cutesy terms like "tushy," "hiney," "boobies," "wee-wee," and "tee-tee." Using the correct anatomical term for body parts as a child in Catholic elementary school was so frowned upon in my neck of the woods that I still remember a kid who got sent to the principal in second grade for pointing to his junk when he got to "P" while singing the ABCs.

Now, as a parent, one of the hardest things I've had to do has been to look back on how I was raised and decide what parts I'd like to do the same with my kids, and which parts I want to change. I was in college before I could say the word "penis" without giggling and that was only behind closed doors with my sorority sisters or the under cover of darkness while the subject was in hand (get it?). I thought it might be a good call to teach my kids to describe their body parts by the correct anatomical names like breasts, penis, testicles, butt from the get-go, in hopes of making them feel proud and empowered about their bodies instead of ashamed like I was.

The first time my best friend, who has her own 2-year-old son, heard me use the word "penis" in front of my kids, she laughed and told me she couldn't believe I was using those terms so matter of factly. I spent the rest of that playdate feeling more than a little sanctimonious and even bragged about how we were slaying at this parenting thing to my husband that night. At least, that's what I thought.

Last month they looked up during the 17 seconds between episodes of Super Why on Netflix and noticed I have a vagina, or as they put it, "Mommy, your penis is gone."

As it turns out, I owe that friend a double batch of her favorite peanut butter and banana muffins and some groveling, because she was 100 percent right. I thought I was being a better parent by teaching my kids the proper terms for their body parts, and maybe in the long run I'll be glad I did it, but for now it has backfired spectacularly.

My boys know the thing hanging between their legs is a penis, but up until recently, they thought everyone had one. Like most 3 year olds, they think leaving my side for more than four seconds is the same as watching me board a flight on Oceanic Airlines, so they're usually with me when I get dressed in the morning. Last month they looked up during the 17 seconds between episodes of Super Why on Netflix and noticed I have a vagina, or as they put it, "Mommy, your penis is gone." I calmly explained to them that Mommy was a girl and most girls don't have a penis, we have a vagina. I was proud of myself for explaining the differences between genders so easily.

I went to check on them when I heard all the toy bins getting dumped onto the floor, and when I asked what they were doing, they told me they were looking for my lost penis. Even though I tried to tell them that my penis wasn't missing, I just didn't have one, they continued to search.

When we went downstairs I started on breakfast (Step 1: turn on coffee) and they ran off to play. I went to check on them when I heard all the toy bins getting dumped onto the floor, and when I asked what they were doing, they told me they were looking for my lost penis. Even though I tried to tell them that my penis wasn't missing, I just didn't have one, they continued to search. I felt frustrated that they didn't understand, but on the bright side we found all the missing pieces to the puzzles and my favorite hair clip. Even now they still furrow their brow in worry if they catch a glimpse of my bottom half while I'm getting dressed. Last week one of them said, "Mommy doesn't have a penis, she has a na-gin-a." I was thrilled that they finally seemed to get it, until he followed it up with, "Maybe it needs a Band-Aid."

We're currently potty training, which means there's even more body-part discussion than usual going on. In an effort to excite them over using the potty, I often send them into the bathroom with their father so they can watch and learn how to aim and also so he can see what it's like to never pee alone. Observant little buggers that they are, the boys saw their dad's testicles and wanted to know what they were. He explained every male has testicles, even them. After an hour or so of exploring and counting their testicles during which I tried very hard not to blush and act natural, we headed out to the store.

I was only half paying attention to their babbling when one of them turned to me, pointed to the left side of my chest and said, "This is Mommy's breast, do you like it?"

The kids asked every man we came in contact with, "Hey, do you have two icicles?" Never have I ever been so happy for their toddler lisp. Luckily, most men thought they were referring to the fact that it was cold enough to snow outside and one helpful employee gave us directions to the popsicles. I was still mortified.

I only breastfeed for a couple weeks before switching to formula, so my kids largely see my breasts as things to squish with their bony little elbows while jockeying for a better television viewing position on my lap. But last week they asked me why I wear a bra. Figuring they were a bit young for a lecture on the patriarchy, the history of women's fashion, and gravity, I stuck with, "Mommy wears this on her breasts." They demanded to see, so I opened briefly opened my shirt to show them and as I did I was mortified to realize that I was, for all intents and purposes, flashing my children.

Once I verified online that 3 year olds who saw their parents naked wouldn't necessary be scarred for life, we went out to the store. We were paying with the young guy cashier I adore because he wears fun bow ties but more importantly because he always bags my groceries according to category (fridge, frozen, produce, pantry) making putting stuff away much, much easier. My kids usually turn on the charm at the checkout in hopes of scoring a free "PAID" sticker, so I was only half paying attention to their babbling when one of them turned to me, pointed to the left side of my chest and said, "This is Mommy's breast, do you like it?"

I couldn't see my own face, but the cashier looked like he just got back from a week on Turks and Caicos without any sunscreen. We somehow managed to finish the transaction without making eye contact or touching hands and I said a silent farewell to him in my head, thanking for all the times he told me which bag had the eggs in it.

I couldn't chastise the kids, since they were proud of themselves for sharing their new knowledge with the rest of the world, and after all they were only repeating exactly what I had told them. But as I walked out to the car I texted my husband and told him I couldn't set foot in that store again without dying my hair and maybe undergoing some minor cosmetic surgery.

Although it's made for more than a few embarrassing moments, and I've had to switch grocery stores, I don't completely regret teaching my kids the proper terms for their anatomy. It's my hope that talking about their bodies in this straight-forward way will help make discussions about sex and protection a little less awkward when the time comes. But until then, I'm dreading the day I get a call from the preschool saying my kids went around the classroom searching for the girls' missing penises and teaching the other boys how to count their icicles.