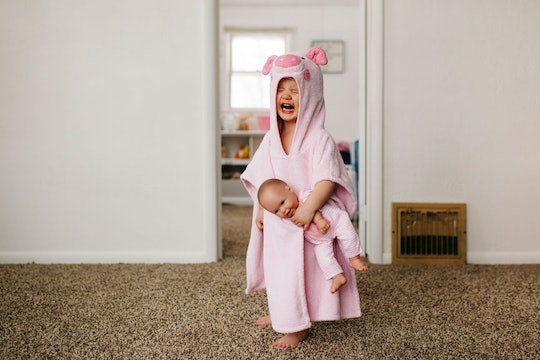 Why Telling Kids To "Calm Down" Only Makes Their Tantrum Worse

Every parent knows the frustration of dealing with a child who's gone into full meltdown mode. When your kid starts kicking and screaming, there's a good chance the first words out of your mouth are "calm down," (and the volume those words are uttered at probably depends on how much patience you've got left on any given day). But has any kid in history ever actually been able to compose themselves that quickly? Telling kids to calm down doesn't help much, but there are lots of other ways to deal with tantrums effectively.

I spoke with Dr. Erina White, Clinical Services Director and VP of Parent Services for Mightier and a clinical researcher at Boston Children’s Hospital, about how to deal with tantrums and emotional outbursts. The first thing she wanted to stress is that there's no magic solution or one-size-fits-all approach to dealing with meltdowns, and there's not a parent alive who hasn't told their kid, "calm down." But they're two words that moms and dads should try to cut from their vocabulary. "It isn't effective and often can make things worse," White says, because it sends a deeper, more insidious message to your kid. "They're basically saying... 'I can't stand you right now, whatever you're doing is driving me nuts, please stop because I can't take you anymore.'" It's a hurtful message for a child to receive from the person who's supposed to be their stabilizing influence.

Instead, White says your goal is to separate your child's emotions from their behavior. The feelings that led them to throw a tantrum are valid, even if the kicking and screaming is not. While it's easier said than done, you should try to stay calm yourself while engaging your child in a conversation. “I try to ask questions," she says, "how are you feeling, what’s going on, what can we do to make this better?" They may be too far into meltdown mode to stop and answer you (or simply too young to discuss their emotions), but taking the opportunity to try and understand what's going on might help de-escalate the situation.

If your child isn't willing or able to talk about their feelings in the midst of a tantrum, White says your next best option might be to go into distraction mode. "I'll try to crack a joke, or add some humor to the situation... I'll say to my daughter when she's writhing on the floor, 'Wow, who taught you those breakdance moves?'" You could also try to divert them from their meltdown by tempting them with a fun activity. My toddler, who loves to help out with 'grown up' stuff, will often stop crying if I suddenly remember an urgent task I need a hand with.

Sometimes the little one who's thrashing around on the floor and pushing you away may actually be in serious need of a simple hug. "There are times when you just know that underneath that major meltdown is just some extraordinary sadness, and they just need to be held." The trick, however, is understanding when your child wants to be cuddled and when they want you to just give them some space. It's something that you kind of have to intuit, and as White warns, "It may not be the same everyday."

Inevitably, there are going to be times when you can't stop yourself before you snappishly tell your child to calm down, or even have a meltdown yourself in response to theirs. It happens to all of us, of course, but try and use it as a teaching moment. After you react to a temper tantrum by losing your cool and screaming and yelling, circle back to that moment later and acknowledge that your behavior wasn't cool either. "You model how to be gracious, how to admit that you were wrong and how to apologize. You also allow them to learn how to forgive and how to move on.” Some parents may balk at the idea of apologizing to their child for trying to discipline them, but White says it's important to always be an example of how'd you want your child to behave.

It's also crucial to understand that emotional outbursts are an unavoidable part of a child's development, and that's not a bad thing. "What they’re doing when they’re young is learning... They’re learning all of these different emotions and they’re learning what they feel like and then they learn how to navigate them and manage them.” When it comes to learning how to deal with emotions, you're your child's first and best teacher. You won't be able to calmly defuse every single one of your kid's temper tantrums, but what's important is trying, again and again.

More Like This
Reddit Applauds Mom Of Five Who Stood Her Ground & Left Sleeping Dad Behind
12 Helpful Tips For Hiking With Kids
6 Mindfulness Activities For Kids
What Age Do Kids Start School? Here’s What You Need To Know