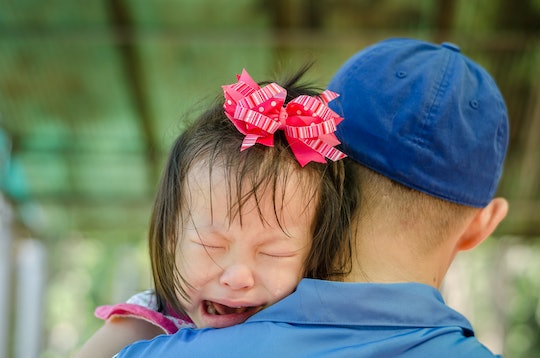 The Worst Way To Respond To A Toddler Tantrum

Toddler: a tiny dictator who rules with an iron fist or a loud shriek or a limp and flailing body. Anyone who has ever raised a child has undoubtedly found themselves dealing with some feelings, as big emotions tend to come out of tiny, tiny bodies. Toddler tantrums are especially intense and can be intimidating, depending on your particular toddler's tantrum-style. There are effective ways of responding, not-so effective ways of responding and, of course, there's the worst way you can respond to a toddler tantrum.

All the experts say pretty much the same thing when discussing and/or suggesting best practices for calming your toddler's tantrum: approach with empathy. Toddlers are not yet developmentally able to handle the big feelings they experience and can become overwhelmed by emotions older kids and adults can identify, process and successfully manage. So, empathy is the key to successfully calming your overwhelmed child. In my opinion (and the opinion of said experts) thinking like your toddler, approaching the situation from his or her viewpoint and considering how you would feel in similar circumstances helps you to respond appropriately and end the tantrum before an even larger, more intense tantrum begins.

It taught my kid that I cannot be relied on to comfort him when he's afraid. It taught him that his mom can't handle her sh*t.

On the flip-side, almost all experts agree that the worst thing you can do when your toddler is throwing a tantrum or having a meltdown, is have a tantrum or meltdown of your own. Of course, any mother (any parent, actually) knows this is easier said than done.

I get it. Toddler tantrums suck. They are scary and maddening and frustrating and pretty ridiculous and they can trigger you in ways you didn't even know you could be triggered. More often than not, the run-of-the-mill tantrum is just as overwhelming for parents as they are for toddlers. I can't count the times I've stood there just looking at my kid while arms were flying and legs were flailing, eyes wide and mouth agape, at a complete loss as to what to do next or how to handle the situation.

Then, of course, I'll convince myself that I've done something horribly wrong and I've messed up my kid and I"m worried that I've failed and that my kid is the only kid in the entire world who acts this way.

You know what it accomplished? Nothing.

Sometimes its unavoidable and, hey, we've all been there. There isn't a parent in the world who hasn't had one of those, "Yeah, I'm just done," moments. In my experience, it's usually at the end of the day and my kid hasn't napped and my other kid isn't only hungry, but hangry. Something will inevitably happen and before I know it, my 2-year-old is lying on the floor in a fit of rage (probably because I gave him the wrong cup or something). I'll let out a shriek of frustration, turn around, stomp out of the room and maybe even slam a door if I'm really at the end of my metaphorical rope.

Instead of blaming yourself or thinking you've failed or wishing for a fairy, remind yourself that it's OK.

Then, of course, I'll convince myself that I've done something horribly wrong and I've messed up my kid and I've failed and that my kid is the only kid in the entire world who acts this way. In the end, I'll blame myself and consider it all my fault. So trust me when I say: I feel you, mama.

I think it's safe to say we've all experienced moments when we want to run away or lock ourselves in our respective bedrooms and turn up the music as loud as it will go. We want some magical parenting fairy to pop in and tell us the right thing to do and the right words to say or just take over for us, entirely. We all want to be that supermom we've read about; the one who gets down on the floor and helps her child calm down and get control of themselves.

However, instead of blaming yourself or thinking you've failed or wishing for a fairy, remind yourself that it's OK. Walk away. Count to ten. Make sure your toddler is in a safe spot where he or she can't get hurt and leave the room. Go calm down and take a few good breaths and, when you've reined in your big emotions, go back in and help your toddler do the same. Not only will you be in a better headspace to remain calm, you'll be able to give your toddler the empathy he or she needs and deserves. After all, if you can talk yourself down from a potential tantrum, you can handle your toddler's, no problem.

More Like This
17 Best Potty Training Products For Toddlers
26 Toddler Lunch Ideas They’ll Actually Be Excited To Eat
Ashley Graham On The “Fun, Organized Chaos” Of Raising Twins
These Stepmother's Day Instagram Captions Are Straight From The Heart