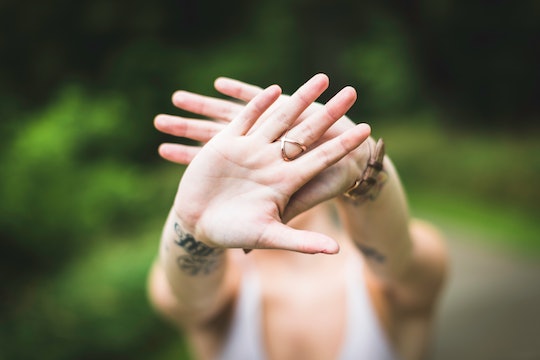 The One Thing Every Mother Thinks, But Rarely Says Out Loud

Becoming a mother changes a person's life in ways that no one understands until they're standing in the thick of screaming babies and explosive diapers. I'm a competitive person, so when I became a mom I just knew that I was going to mom like a boss. I was convinced that I could handle the many ups and downs and in-betweens that motherhood would throw my way, but I, as well as many other moms, have had fleeting moments of fear and doubt despite what my know-it-all pre-parent self thought she knew. If I'm being honest, there are times when I reach my limit and I think the one thing every mother thinks, but rarely says out loud: "I don't want to be a mom anymore."

There, I said it. Sometimes, I just don't want to be needed every hour of every day and I have days when I want to quit. Honestly, I don't think that makes me insane or undeserving or ill or a terrible parent that shouldn't have procreated. Honestly, I think it makes me human.

The thing that no one says about this very common thought (that's as fleeting as it is real), is that it's totally normal. Instead, the collective "we" usually sits on the sidelines and watches mothers lose themselves in the abyss of countless snacks and endless breastfeeding and frustrating tantrums, and they'll say things like, "Been there, done that," and, "Enjoy it while it lasts," and other smug phrases that are completely unproductive and offer no sense of solidarity whatsoever. So, since I have now been there and done that (wait, I'm making a valid point, I swear!) I am here to tell you that there will be days that you feel like you're done with being responsible for another human's life. There will be days when the struggle is so real and you don't want to mom a second longer. There will be days when you feel like your soul is literally going to explode if you change one more dirty diaper or deal with one more manic meltdown.

You might be scratching your head and wondering how admitting that you're at the end of your figurative rope is actually an indication of how damn good you are at raising humans, but hear me out. You wouldn't be so tired if you weren't up at all hours of the night making sure that your baby was fed and comfortable. You wouldn't be so mentally frustrated if you weren't teaching your toddler how to wipe his own butt and giving the potty training phase all that you have. You definitely wouldn't be so tired of hearing the word "Mooooooom" 873 times a day if your children didn't know that they could depend on you for their every need.

Being a mom isn't a glorious job, but it's by far one of the most rewarding. I mean, raising humans to be functioning and contributing members of a hopefully much more accepting and supportive society than the one we've got now, is kind of a big deal. So, shouldn't a job of such importance merit a day off every now and then? Yes, yes, yes, of course it should! When you reach the point of flipping off your toddler behind his or her back or whisper-cursing in between reading your kid's favorite book or hiding in your bathroom as you daydream about wine and solo shopping trips and sleeping for more than four hours at a time, you should probably give yourself a break. And by probably, I mean definitely, absolutely, positively call in reinforcements and go hunt down your sanity.

Don't allow yourself to head into the downward spiral of regret and, "what if?" It's a dangerous and completely counter productive path. Just the other day I was scrolling through old pictures and revisiting my childless life. I stared at the girl in those pictures with such envy. "Look at her with her skinny jeans and her highlighted hair," I thought. "Look at her strolling through stores alone and taking spontaneous trips to the beach and drinking mimosas at brunch with her friends. If I met her now, she'd laugh and point at me with her thin little finger, making fun of the bags under my eyes and the ravioli stains on my over-sized t-shirt." I had reached the point of feeling sorry for myself, because I was so tired and frustrated and mentally drained, that I yearned for the days when I was child-free and worry-free and (basically) responsibility-free. I missed the frivolous days of freedom and spontaneity when I could hop on a plane and fly across the country, much less just go to the grocery store without having to make a meticulous plan in advance.

But my self-loathing was short lived. I eventually reached the pictures of my little boys and my partner and I couldn't help but smile at how far I've come. "Look at her," I thought. "Look at her teaching her son how to make pancakes and her baby how to walk. Look at her chasing her dream job and cooking supper for four people and providing for her family. Look them laughing and playing. They all look so happy. She looks so happy." You see, that girl in the first picture was great, but at the end of the day her life was just filled with things. Wonderful things, to be sure, and amazing memories that I do cherish. But what I have today with my boys and my husband and my career? Well, they all completely trump everything I had before.

So sure, some days I don't want to be a mom anymore. Some days I'd rather just be that girl with the skinny jeans that's standing outside of a hip bar and drinking tequila with her incredibly interesting acquaintances. Some days I just want to quit. But the truth is, that no matter how appealing that mirage of my former self may seem, I will never quit the life that I have now because it's just so damn amazing. It might be covered in unknown substances and crackers and my children's rogue markers, but it's still so, so, amazing.