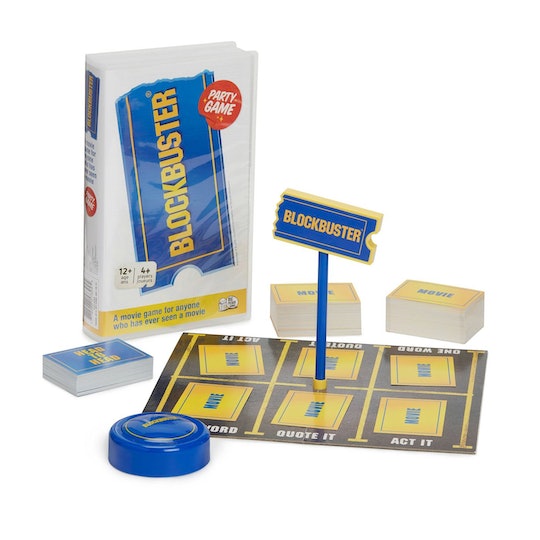 Stock Up On Goobers, The Blockbuster Party Game Is Here For All Your Movie Memories

Back in the day, there was no streaming or surfing. If you wanted to watch a movie, you got dressed and headed to your local Blockbuster store. Now, you can get to relive your video rental days, because The Blockbuster Party Game from Big Potato will make you want to whip out your membership card and see if you can find a feature flick — and buy some Goobers, too.

The Blockbuster Party Game is broken down into two parts. In round one, get ready to bring your movie trivia mettle as you go head-to-head in the Movie Buzzer Battle. Topics might range from “Zombie Movies” to “Movies With Tom Cruise.” Think fast, and slap the buzzer to shout out your answer. Now it’s up to your opponent to respond — within 15 seconds, that is. The game goes back and forth until the first player runs out of time, and therefore loses.

But the game’s not over yet. Round two is Triple Charades Jeopardy. The winning player from round one takes six movie cards, and, natch, gives the three hardest ones to the opponent. Each player then has 30 seconds to get their own team to shout out the movies on the cards. In order to win, they have to act out a film, make up a quote about a movie, and then describe the last one in just one word. When the team guesses correctly, they add the card to their collection. The first team to snag a card from all eight movie genres wins!

The Blockbuster Party Game ($20, Target) design is nostalgia at its finest. The game comes (brilliantly, I must say) in an iconic VHS tape box with the logo branded on the front. Which makes perfect sense, since '80s and '90s movie rental goers were renting their movie of choice on a VHS or (gasp), a Beta tape. The game also has 200 Movie Cards, 60 Head-to-Head Cards, a timer and a traditional Blockbuster parking lot, complete with the bright blue and yellow sign. The good part is that, unlike all of your prior experiences at Blockbuster, you won’t have to spend time circling the lot looking for a spot in order to play this board game.

Another great feature of The Blockbuster Party Game is that it’s really a few different games combined into one. Round one feels like Family Feud with its buzzer and having to shout out an answer, while round two is part Charades, part Trivial Pursuit. So there’s something for every player to enjoy, no matter what types of games they prefer to play. The game is ideal for ages 12 and up, and can have 4-12 players at a time.

All of this retro game play is sure to bring up some serious Blockbuster memories for those who grew with it. The movie rental chain opened its first store in Dallas, TX in 1985. And during its heyday, there were about 9,000 Blockbuster video stores, reported NBC News. Come Friday and Saturday nights, couples would cruise the aisles looking for a rom-com, while parents would peruse the family section in search of a movie that everyone could watch.

So if playing the game has piqued your interest in going to a real Blockbuster video store, well, that might be a challenge depending on where you live. The last lone Blockbuster store remains in Bend, Oregon. And by last one, we mean the last one in the world. Which means that playing The Blockbuster Game just might satisfy your nostalgia for old-fashioned video rentals — and provide hours of entertainment, too.