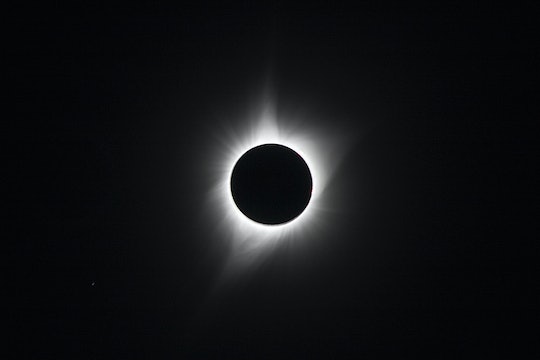 If You Can Manage To See December's Solar Eclipse, It'll Be Amazing

I initially began writing this piece about how to see the December 26, 2019, solar eclipse, but as it turns out, you’ll only be able to see it if you’re in Asia, Africa, and Australia. Unless someone somewhere posts a live stream of it online or on TV — looking at you NASA and The Weather Channel — we are just going to have to look for coverage on the eclipse after the fact, unfortunately.

But there are some pretty cool facts surrounding this particular full moon — which I’m not going to be able to see — and I’m a little bit jealous, to be honest. This is the third and final solar eclipse of the year, and in some places it will look like a ring of fire because the moon will completely cover the sun and you’ll just see the ring around the darkness. (Johnny Cash would be so proud, y’all. Also, "Ring of Fire" is one of my most favorite Johnny Cash songs and I won't even be able to see the eclipse with the same name. Not fair.)

So why is this amazing eclipse going to look like a ring of fire? Is Johnny Cash coming back from the beyond? Sadly, no.

“During this eclipse, the moon will cross directly in front of the sun for viewers along the centerline of its path," according to Space.com. "Because the eclipse occurs just a few days after the moon reaches apogee — its farthest distance from Earth — its apparent size in the sky will be smaller than the sun. This means that it won't block the sun entirely, but it will instead turn the sun into a blazing 'ring of fire' from Earth's perspective."

However, this “ring of fire” eclipse will only appear over Saudi Arabia, India, and Southeast Asia, and it will appear as a partial eclipse over other parts of Asia and Australia.

If you're in Saudi Arabia, India, Sri Lanka, Singapore, Philippines, Guam, or in parts of Australia, and Africa, you'll be able to enjoy the last solar eclipse of the decade. Enjoy and know I am filled with envy. Please take a video and post it on Facebook, though.

More Like This
How To Help Families Impacted By Hurricane Ian
Up In The Middle Of The Night? We've Got Instagram Captions For That
20 Toys You Don’t Want To Miss From Amazon’s Top Toys List Of 2022
56 Pumpkin Captions For All Of Your Most Gourd-geous Photos