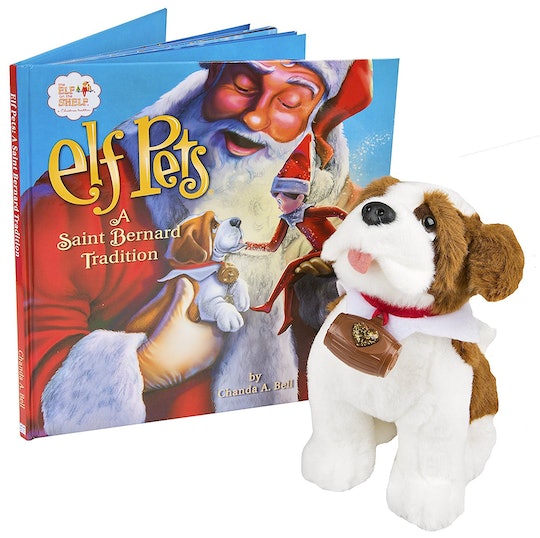 Are you one of the millions of parents who love creating a little Christmas magic for your kids by posing an Elf on the Shelf around the house all through December? Then you'll love doubling that fun by adding an Elf on the Shelf pet dog to your family now, so you'll be ready to roll when the holidays come along. See, the good folks who created the original Elf doll and storybook started a line of companion toys known as Elf Pets a few years back. And now, Santa has a host of animal helpers at the North Pole who help him do his important job.

The Elf Pets series began with the Elf Pets Reindeer, who collect the faith, hope, and love from children that Santa needs to get the proper amount of Christmas spirit. The more recent additions are the Saint Bernard Elf Pet pups; their job is to "encourage children to engage in acts of kindness to generate cheer to help Santa," as the official Elf on the Shelf website explained. They gather that cheer in the barrels around their necks, all the better to transport it back north.

Like the Elf, the Elf Pets Saint Bernard can be officially purchased and adopted through the website, and it's up to the owner to find just the perfect name (try this elf-centric name generator). There's also a companion book, a Pup App for your smartphone, an adorable pajama set, and soon, a backpack tote available through the website and Target.

You'll also want to set aside time this holiday for the brand-new animated special, Elf Pets: Santa's Saint Bernards Save Christmas ($10, Santa's Store). The heartwarming story follows Sampson the pup and Joy the Scout Elf as they work with a kind-hearted family to gather the cheer and goodwill Santa needs for his yearly mission. If the trailer is any indication, you'll probably end up watching this one multiple times:

More to the point, bringing home a Elf Pet Saint Bernard can add a new level of inspiration to the antics you already plan for your Elf on the Shelf. Think of the possibilities: The Elf and its pup sneaking tastes of your Christmas cookies... driving Barbie's car, with the dog leaning its head out the window... or the pup pulling a sled while your Elf hitches a ride. The two of them can have a sack race, as suggested on Picklehead Soup, or they can help string your holiday lights, as demonstrated on Sweet Shoppe Design. They can play hide and seek in the tree, build snow forts out of mini-marshmallows, and make snow angels in flour. If you're the edgier type, you could have your Elf take its Saint Bernard for a walk on a yarn leash, and place mini-chocolate kisses in strategic places.

Whatever your holiday Elfing style, adding a puppy to the mix can only make it that much better. (Let's face it: Dogs make everything better.) Plus, knowing the mission Santa's doggie helpers are on could prompt your kids to treat one another more kindly, thusly replenishing Santa's magic. (One can only hope, right?)

Your kids will also appreciate one important distinction between the Elf Pets and the Elf on the Shelf. As seasoned owners know, once Christmas Eve arrives, the Scout Elves go back to the North Pole to tackle jobs like maintenance work and answering thank-you notes to Santa. However, Elf Pets are designated "Year-Round Pals," so they can stick around your home for cuddles, playing, and bedtime companionship long after other holiday gifts have been forgotten.

Traditions are what make our holidays personal and special, but there's nothing that says we can't tweak them just a little to add more fun and meaning to the mix. Bringing home an Elf Pet Saint Bernard to hang with your Elf on the Shelf could enhance the Christmas fun for you and your kids. (The only thing that would make it perfect would be if the dog's barrel were filled with Merlot for moms exhausted from finding new places to pose the elves every night.)

Editor's note: This post has been updated from its original version to include the price and link to purchase Elf Pets: Santa's Saint Bernards Save Christmas.

More Like This
The Best Halloween Family Pajamas To Match Your Boos
25 Mother And Daughter Halloween Costume Ideas That Are Cute And Spooky
14 Top Gun Costumes For The Whole Family To Buy Or DIY
These 2022 Halloween Squishmallows Are So Cute, It’s Scary