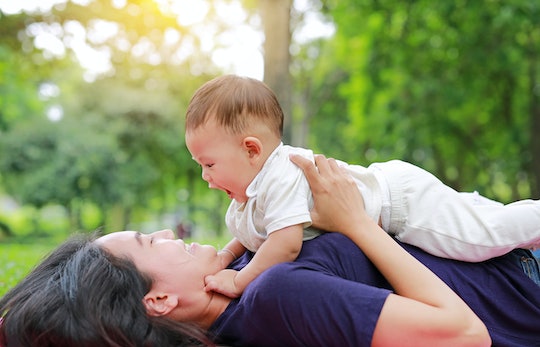 Have you noticed a lot of women lately at the mall or coffee shop who look as though they might go into labor at any second? Do you get a lot of baby shower invites with June or July dates? As it happens, there's a good reason behind that. Statistics show that the month when most babies are born happens at the end of summer, and I'm proud to be among them.

As the most recent figures from the National Center for Health Statistics (sent to me via email by the Centers for Disease Control) reveal, August was by far the most popular birth month for 2018, with 344,750 babies making their debut in the middle of the dog days. The surrounding months come in a relatively close second and third place: July 2018 saw 329,009 babies enter the world, and another 322,772 births occurred in September.

Which was the least popular month for births last year? February, which boasted only 284,250. But in all fairness, the month only has 28 days, so that's two or three days' worth of babies whose birthdays got rudely pushed over to March. If all our months had an equal number of days, the figures might be very different.

But wait, that's not the end of the story: Back in 2016, Daily Viz writer Matt Stiles compiled birth month and day statistics from 1994 through 2014. Averaging them out, he discovered that the most popular birth date was September 9, with the 19th, 12th, 17th, and 20th rounding out the top 5. Still, many dates in August and July weren't far behind. And while a few stray days in December ranked surprisingly high on the list, the least popular day to be born was December 25. Seems moms try hard to shield their kids from the disappointment of being told, "Here's your Christmas gift! Oh, yeah — it's also your birthday present."

Biology may play a large part in our odd summer-baby boom trend. As More explained it, most animals are born during warm weather season, which varies according to hemisphere. Mild temperatures mean more availability of food and fresh water for the babies (and nursing mothers), plus less chance of the little ones freezing to death in an unexpected snowstorm or cold snap. Even though we humans have come a long way from our hunting and foraging days, our bodies may still be hard-wired to favor timing our fertility to a summer gestation.

Statistics presented by Smithsonian magazine seem to support this theory. When you look at birth months by area, a definite pattern emerges. In southern states like Texas and Florida, the birth rate jumps up dramatically in December and January; not so for New York and Pennsylvania. The same holds true worldwide; European nations see far more births in spring and summer, according to the study "Human birth seasonality: latitudinal gradient and interplay with childhood disease dynamics," published by The Royal Society. Meanwhile, Caribbean nations have their birth peaks between September and November.

Then, too, there's the whole issue of, ahem, how all those babies get started. Do a little quick math, and you notice that summer babies are conceived in cold-weather months (November for August, October for July, December for September). Combine the added time spent indoors, the coziness of body heat under quilts, and the festive mood brought on by the long holiday season, and you've got a perfect atmosphere for baby-making.

For now, at least, it looks like my birth month of August is — pardon the pun — the hottest time for new arrivals in the US. Though some of us have to miss out on the fun of celebrating our birthdays at school, there are still plenty of advantages to being an 8th-month child. Depending on the day, you're either a Leo or a Virgo, both of which are awesome zodiac signs. You can celebrate with a beach day, a barbecue, or a day at a water park. You don't have any major holidays to compete with (though National S'Mores Day, National Roller Coaster Day, and National Women's Equality Day certainly deserve attention). Plus, you share a birth month with fellow August-born celebs like Jason Momoa, Chris Hemsworth, Madonna, Anna Kendrick, Viola Davis, and Andrew Garfield.

Welcome to all the new August babies! You're in excellent and popular company.

More Like This
Baby Growth Spurts: When They Happen & What To Expect
41 Strong & Sweet Baby Boy Names That Start With “K”
When To Stop Swaddling Your Baby: 8 Signs It’s Time To Transition
45 Sagittarius Girl Names For Your Happy-Go-Lucky Baby