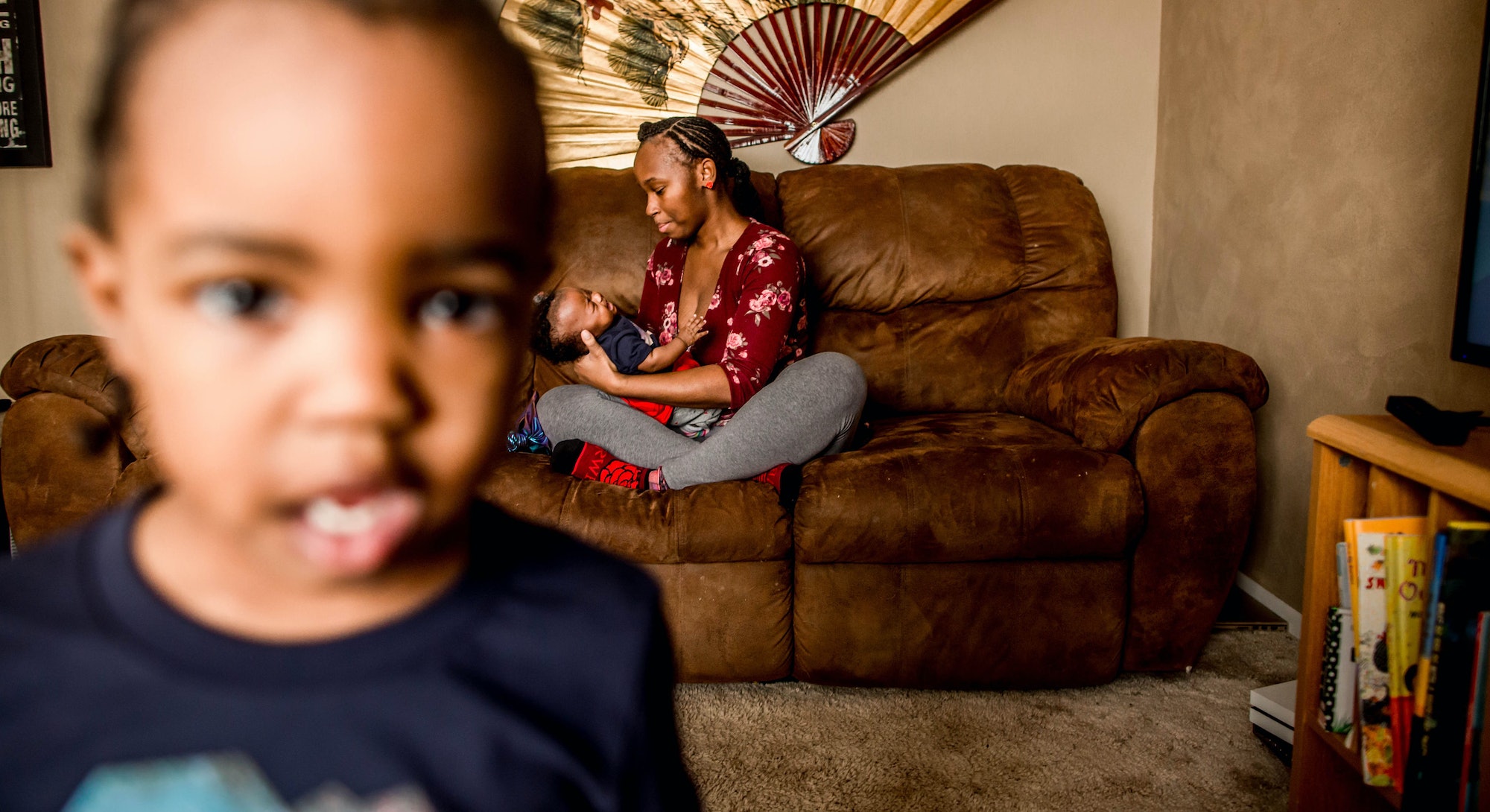 In Her Second Pregnancy, She Found The Freedom To Get Past Trauma

Ambreia Meadows-Fernandez knew having two children was going to be difficult. After all, she says, "more children equals more stress." And she knew that sharing her trying-to-conceive journey — along with the challenges she faced during pregnancy, the pitfalls of perinatal mental health, and the realities of premature birth — openly, honestly, and with little restraint would present an entirely different set of difficulties, too. But as she looks back on 12 months of participating in Romper's Trying series, which chronicled the journeys of five women trying to conceive over the course of the year, she's also taken aback by how she rose to the occasion. When she didn't think she could, she did. Again, and again, and again.

"We’ve established our own new normal a lot sooner than I thought we would," Meadows-Fernandez, who gave birth to her second child in December, tells me via phone. "And that doesn’t mean it’s not hard from time to time, but it’s like... I'm often shocked that I'm not dead. I’m doing it, and I haven’t lost my mind, and I'm not freaking out all the time."

Finding her way to that new normal wasn't easy, though, and the complexities of that journey didn't always paint a pretty, easy-to-reveal picture of what it's like trying to conceive, going through another pregnancy, or navigating postpartum life. Meadows-Fernandez has a 3-year-old son and was trying for a year and a half when she found out she was pregnant with her daughter, who was born prematurely after doctors discovered that her daughter's heartbeat was high and her placenta wasn't working at capacity. During her pregnancy with her daughter, she dealt with perinatal depression, her husband's weeks-long military training that took him away from home, and the often under-discussed but somewhat typical feelings of guilt that accompany the thought of bringing another child into the fold. In other words, pregnancy, labor, and delivery with baby number two wasn't all sunshine and rainbows.

But that's the picture Meadows-Fernandez wanted to present: one that doesn't sugarcoat what can be a very difficult experience, but instead, allows parents to own their feelings, regardless of whether or not they're considered positive or negative.

"Mental health in general is under-discussed. Parenting is often spotlighted but not put forth in a realistic way."

Showcasing that freedom was important to Meadows-Fernandez, who describes her decision to take part in Romper's Trying series as "one of many steps that I'm taking in my life right now towards transparency and authenticity." As any mom who decides to share even a modicum of information about her parenting choices on the internet knows, it's easy to be transparent with close friends and family members. It's an entirely different mountain to traverse, however, when you're choosing to authentically share the not-so-joyful aspects of conceiving, pregnancy, and childbirth to an untold number of internet strangers; strangers who, let's face it, can be downright cruel in their assumptions and blind condemnation. "It’s one thing to say it to one person; it’s another thing to have it documented in front of who knows how many people," she says. Meadows-Fernandez wanted to lean in to the challenge, though, if for nothing more than personal accountability. "For me, this was that next step of authenticity."

Mid-way through her first trimester, Meadows-Fernandez faced perinatal depression — a common mental health condition that impacts a reported one in five pregnant people, according to The American Academy of Pediatrics, and a greater share of women after birth, yet is rarely discussed. Meadows-Fernandez wanted to be honest about her experience. "Mental health in general is under-discussed," she says. "Parenting is often spotlighted but not put forth in a realistic way, and like, for me, this experience and being able to chronicle it kind of gave me a chance to be: OK, roses aside, as a parent [feeling this way] is normal, it's just that no one is talking about it."

"I feel like the lows were just as important, if not more important than the, 'Oh my gosh, yay the baby's here, and she’s so beautiful and she’s so great!'"

At one point during her pregnancy when her husband was deployed, and she was visiting family and feeling displaced and disconnected from her home, Meadows-Fernandez began to wonder if she had made a mistake having a second child. "I had some pretty bad depression, and it just made me kind of sit back and wonder why we made the decision to do this, and if it were the right decision at all." She says she began questioning whether she was even a good mom to her first child, and if she even deserved to have a second child. "Just, like, a whole lot of really bad messages in my head," she says.

Then there were the physical complications that came along with her second pregnancy. Meadows-Fernandez learned her daughter was diagnosed with an intrauterine growth restriction, meaning she was measuring small inside the womb — a condition that can result in early delivery, and lead to other health issues down the road. Toward the end of her pregnancy, doctors also informed her that her daughter's heartbeat was high, adding further to Meadows-Fernandez's stress.

She could have swept these challenges under the proverbial rug, and made the carefully calculated decision to present a more "positive" picture of pregnancy; one where she experienced only happy-go-lucky, easy-to-flaunt feelings about having a second child. But Meadows-Fernandez says she didn't want to feed into an easily digestible narrative that can, and often does, make so many pregnant women and new moms feel as though they're broken. "I feel like the lows were just as important, if not more important than the, 'Oh my gosh, yay the baby's here, and she’s so beautiful and she’s so great!'” she says.

Meadows-Fernandez also had her children in mind as she was detailing her experience, especially the "darker" moments. She knows that, eventually, her children will look up her Trying chronicles, and with that inevitable moment will come the opportunity for her kids to gain some perspective. "For my son, I hope he gets some understanding of what myself and many others go through to bring life into this world," she says. "Because I think a lot of guys don't consider that at all."

And for her daughter, who is now four months old, Meadows-Fernandez hopes she realizes how innately strong women — especially Black women — are. "I don't want to get into myths of women having to be strong," she says, "but whether we're forced to by society or we choose to of our own accord, women are strong. And you can be in the trenches of emotional things or physical things or whatever, and at the end of the day we always find our way out."

Meadows-Fernandez says that rather than have the designation of strength, she hopes her daughter will have the option of strength — an option presented to her, in part, by learning what her mother endured in order to bring her into the world. The harrowing statistics of Black maternal mortality in this country — a Black woman is three to four times more likely to die as a result of pregnancy or childbirth than a white woman — were often on Meadows-Fernandez's mind throughout her pregnancy. "Every time something went wrong, I felt like a statistic," she says. "And for me that gave me a little more stress." While Meadows-Fernandez says she didn't feel any societal pressure to have children, she knows many women do — and she hopes her daughter will know what to do if that pressure ever befalls her. "I want her to know that her decision to or not to give birth one day doesn't improve or decrease the value of who she is as a human," she says.

This won't be the last time Meadows-Fernandez looks back at this 12-month process of chronicling her second pregnancy. While she can't predict the future — and has no idea as to whether or not she'll ever try to have a third child — she knows that this at times challenging, transparent, introspective journey has given her the ability to side-step that inevitable pregnancy amnesia. "I'm just glad for having the documentation," she says. "Because my memory is trash."

Now she has something to look back on — something tangible — that can remind her of the ugly parts of pregnancy; parts she is likely to experience again. And if she's willing to deal with the physical and mental consequence of pregnancy once more, she will also have tangible truth that she can rise to the occasion and see the beauty in it. Again.

If you are experiencing prenatal or postnatal depression, you can call 800-944-4773 to reach a counselor at Postpartum International. If you are having suicidal thoughts, call 1-800-273-8255 to reach the National Suicide Prevention Hotline 24 hours a day.