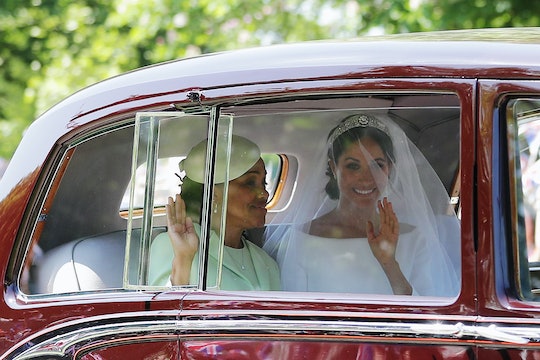 This Is Doria Ragland's Adorably Sweet Nickname For Meghan Markle

Meghan Markle may have had to endure quite a bit of family drama since her engagement to Prince Harry, and unfortunately, that hasn't seemed to cease much now that she's officially a duchess. But throughout it all, it's always been clear that her mom, Doria Ragland, was firmly in her corner. Over the years, she has spoken about her mother in interviews, as well as on her now-defunct lifestyle blog, The Tig. But since nothing is ever *truly* gone on the internet, The Express unearthed a post revealing the nickname Meghan Markle's mom calls her, and it's just as lovely as you'd expect.

In honor of her 35th birthday in August 2016, Markle filled out her own version of Tig Talk, a questionnaire she traditionally offered up to celebrity guests during interviews (according to fan site Meghan Maven's "Tig Archive," the now-duchess conducted interviews with the likes of model Jessica Stam, fashion guru Joe Zee, and tennis superstar Serena Williams, among many others).

In the post, it was pretty clear that Markle was feeling super optimistic about life — then again, she had already begun dating Prince Harry, which likely would have helped put some spring in her step. And in an archived capture of the post she wrote about turning another year older, Markle shared her mother's wisdom that "birthdays are your own personal New Year — your own chance to make resolutions just for yourself and what you prognosticate for your year ahead."

That was far from being the only mention of her mom, though. In the very first question, Markle revealed a few of the nicknames she's gone by over the years, and there were some obvious choices, like "Meg," which appears to be the one Prince Harry ultimately adopted when they became a couple. She also listed "MM" and "M&M," which are clearly plays on her initials, but then added "Flower," and wrote, "which my mom has called me since I was little."

Let's be honest, "Flower" is basically the kind of nickname that only a mother would give, which makes it pretty heartwarming. And it's especially sweet to think that, all these years later, it's still one that remains close to Markle's heart. And though it's not entirely clear how often Ragland would use the term now, all we have to do is consider how supportive she's been of her daughter's substantial life change from television actress to literal royalty, and one of the most famous women in the world, to see how tight they truly are.

For one, Ragland was there with her daughter both ahead of her Windsor Castle wedding (the two spent the night at Cliveden House before the big event), as well as on the day itself (they drove together to St. George's chapel). As Markle made her way down the aisle, Ragland sat in the second row of pews inside the chapel, opposite the royal family.

But Markle's wedding day was far from being the last time the world would witness Ragland being one super supportive mama. In September, when Markle hosted an event to launch Together: Our Community Cookbook, for example, both Prince Harry and Ragland attended, and it seems they couldn't have possibly been more proud.

In fact, Ragland even reportedly spoke to the chefs at the event, according to Yahoo!, and said: "It's amazing. I'm just as excited as you are. I'm so glad I can put the face with the recipes. I'm going to tell everyone, I met her [each of the cooks]! I'm going to make everything, I’m serious."

Honestly, Markle may have had to endure a lot of stress over the comments and actions of her dad, and half-sister since she became one of the most well-known women in the entire world. But it also seems that, in her mom, Markle has a fiercely proud supporter, and that they truly do mean so much to one another. And just in case there's any doubt, they have the sweet nicknames to prove it.