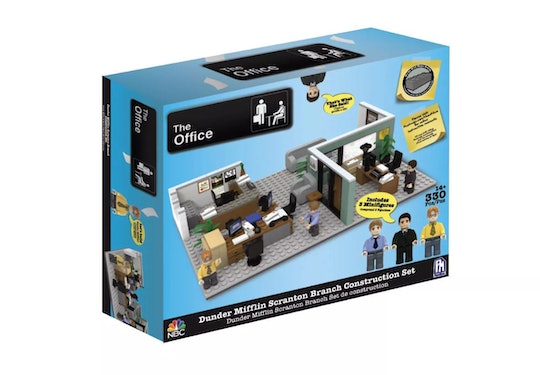 Blocks, Beets, Battlestar Galactica. Put on your best wire-rimmed glasses, and be on the lookout for Jim and Pam because now you can build your very own Scranton branch with the The Office Dunder Mifflin Construction set by NBC.

It's the perfect gift for any superfans of The Office, or just something fun you get for yourself. It would be a great rainy day activity to do as you watch Jim prank Dwight. The construction set has 369 pieces, and contains minifigures of Dwight, Jim, and Michael, as well as Michael's office, Pam's desk, and the shared space of Dwight and Jim.

I came across this gem in my Instagram feed, thanks to the exacting specificity that is targeted marketing. In the very same post was an add for flannel sheets, and one for pumpkin spice scented candles, and I'd never before felt more seen. (Or perhaps, surveilled.) I immediately knew that I had to have it. I adore construction and building block sets, and this one makes me want to squee with all of the possibilities.

There is something wonderful about this set, knowing how much Dwight K. Schrute would either love or loathe it. On one hand, it would appeal to his sense of orderliness. It's precise and could be seen as an outlet for his need to control. But, it's also delving into that area of the brain that calls out for imagination. That is something that the Trans Am-driving farm boy struggled with on a regular basis on the show. That lack of mental creativity is why Jim's pranks vexed him so. He didn't have that piece of his brain that is activated by play.

Also, it would be a great tool for Jim to use to prank him, which is pretty boss.

I only wish that they would make a construction set of the offices in Pawnee as well. I say this mostly because in my dreams, there lurks a Parks and Recreation and Office crossover. If I had both sets, imagine the hijinks that would ensue. Granted, I would have to steal some of my kids Legos to round out the cast of The Office, but it would totally be worth it.

The Office is just one of those shows I can't let go of. If I'm feeling down, or just out of sorts, I know I can play any of the episodes and feel instantly lifted. There was nothing malicious or overly weighty that happened on the show. No murders being solved... even though Dwight was sure he'd make a great detective, as it's always the person he most medium suspects.

The Dunder Mifflin construction set is silly, that's true. But it's also a break. It's something to concentrate on when it feels like the world is coming down around your ears.

Also, it finally allows me to have Michael and Dwight run away in a torrent of passion, speeding off in the maroon Pontiac, searching for their bliss. It's a ship, and I stand by it. Granted, I'm going to need to find a Trans Am lego car, but I think it can be done.

This set is new, but it's going to super popular, so grab one now.