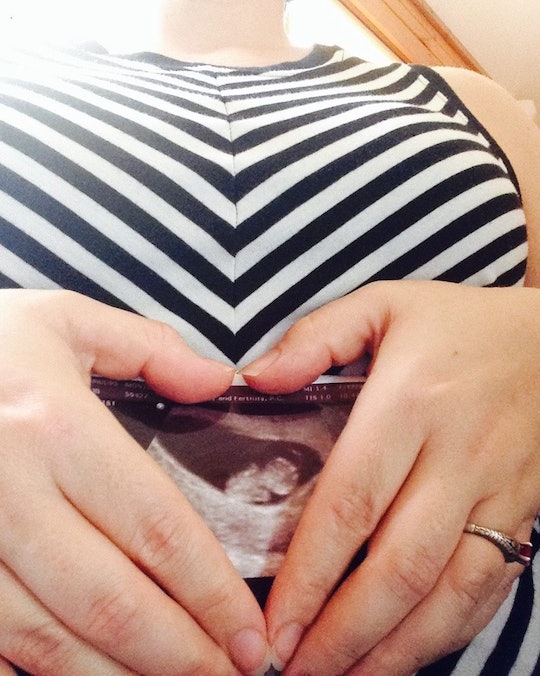 The 1 Question To Ask After A Woman Says She's Pregnant

People say a lot of things when you announce your pregnancy. Most of the time they say, congratulations without considering whether or not it was planned, expected, desired, or something you want to be congratulated for. I don't know about you, but the last thing I want to hear when I'm quietly freaking out is how happy someone else is. Besides, it's normal to have some pretty complex emotions about pregnancy. That's why I propose we start asking the one question every woman needs to hear immediately after she announces her pregnancy:

This question is so simple, but few people take the time to consider it, let alone ask it. Maybe it's because in our culture has positions pregnancies to be something most (if not all) women wanted to experience or happen as a result of sex. Perhaps it's because women, since the beginning of always, have been told by society that pregnancy is something we should be happy about. It seems like all women are expected to want to be pregnant and have babies, and that's totally not the case. In fact, even for those of us who plan to and/or want to have babies, the timing isn't always right.

This question is so simple, but few people take the time to consider it, let alone ask it.

I, personally, have heard plenty of things when announcing my pregnancies. Things like, "Congratulations!" My response? To internally think, "Thanks, but I'm not sure if I am happy about it." Then there was the, "Don't you hate kids?" to which I replied, "No. Why do you think that?" Someone said, "It's about time," which was super inappropriate. Another said, "Aren't you jumping the gun with your announcement? You do know that a lot of pregnancies end in miscarriage, don't you?" This comment, in particular, was perplexing. I mean, you didn't just say that, right? I refuse to believe you said that.

Someone asked, "Aren't you a little old to be pregnant?" which really only deserves a, "Seriously?" as a response. Another unnecessary and insensitive response was the question, "You know how that happens, don't you?" because apparently I have "too many kids." Of course, I received the, "Was it planned?" because asking a pregnant woman about her sex life or personal intentions she has when having sex (if she even had sex to get pregnant) is a thing.

Most people don't know what was happening in my marriage the first time I found out I was pregnant. I was pretty much an expert at convincing everyone (including myself) that I was OK. My then-husband and I had been trying to conceive for about a month when I received an email from a woman who told me that she and my husband had been having an affair. I confronted him, and he told me it was true. I honestly didn't know if I would (or could) forgive him. I remember feeling like my world was going to end.

A couple of tear-filled days and sleepless nights later, I took a pregnancy test alone in the bathroom before I left for work. It was positive. I cried the whole drive and took a few minutes to compose myself. I worked for a Planned Parenthood affiliate at the time, and most of my coworkers and friends knew that we were trying to conceive. As I walked through the door, I felt like I had to tell someone.

The first person I told about my pregnancy was a close friend and coworker. Her response: "I'm so happy for you."

I put on a smile and said thank you, just like I was supposed to, and spent the day freaking out and not knowing what I should do about my marriage and about my pregnancy. I was so ashamed to feel ambivalent about my pregnancy. After all, it was planned. What kind of person isn't happy about a planned pregnancy? I didn't want to tell her, or anyone else, that everything wasn't perfect in my seemingly perfect marriage to a seemingly great guy.

I was so ashamed to feel ambivalent about my pregnancy. After all, it was planned. What kind of person isn't happy about a planned pregnancy?

I cried all night, and the next morning I took another pregnancy test. Then I announced my pregnancy to my husband and my mom. Not a single person suspected that I wasn't over the moon about my pregnancy. I ended up staying with my husband (a huge mistake that I rectified later) and staying pregnant (one of the best decisions of my life). Nine months later we welcomed our daughter to the world.

I try to remind myself that not everyone is happy about their pregnancy, and even if they are, they might also have other feelings, too, because huge life events like pregnancy are not one dimensional. So, now, instead of offering a heartfelt congratulations when someone tells me they are pregnant, I ask, "How do you feel?"

This simple question holds space for a pregnant person to be able to feel OK having and expressing a variety of emotions or concerns.

This simple question holds space for a pregnant person to be able to feel OK having and expressing a variety of emotions or concerns. Considering that 45 percent of all pregnancies are unintended (mistimed or unwanted), according to the Guttmacher Institute, and that most women are spending more and more time actively avoiding pregnancy, according to the Center for Disease Control and Prevention (CDC), that might mean that a pregnant person will experience a variety of emotions, and not all of them will be described as "positive." What does it mean to "hold space" for someone? According to writer Heather Plett,

"It means that we are willing to walk alongside another person in whatever journey they’re on without judging them, making them feel inadequate, trying to fix them, or trying to impact the outcome."

As an advocate and a friend, I strive to hold space for people in both my professional and personal life whenever I can. Sometimes, it takes a lot more effort than simply offering generic pleasantries and smiles, but it is way more rewarding, too.

It seems so simple, but it may just be what someone needs to get through a difficult moment, feel validated in their emotions, or feel empowered to make a decision about their pregnancy.

Most of the time when I ask a pregnant person, "How do you feel," they tell me how happy they are to be pregnant. However, it's not always the case. By giving people an opportunity to feel how they actually feel, I let them know that I am there for them no matter what. Over the years, I have counseled pregnant friends about everything from how to tell their partners about their pregnancy to how to cope with complex emotions about an unplanned or high risk pregnancy. I've also helped friends find the best obstetrics provider in town, and to access compassionate abortion care.

It seems so simple, but it may just be what someone needs to get through a difficult moment, feel validated in their emotions, or feel empowered to make a decision about their pregnancy. The next time someone announces their pregnancy, instead of smiling and saying how happy you are, hold space for them by asking them how they feel. You never know if they might be quietly freaking out, and they'll probably really appreciate it. I know I would.