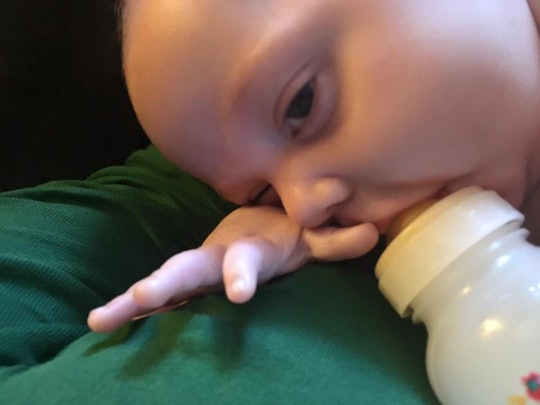 I was a "perfect mom" before I had kids, and breastfeeding was part of my "perfect" pre-baby plan. I'm more than a little ashamed to admit the things I thought, let alone said, about parents who used formula. I honestly believed formula-feeding was something "lazy moms" did, as if a "lazy mom" actually exists. Then I became a parent, breastfeeding didn't go as planned, and I found myself feeding my baby formula. It was actually really hard at times, and as a result I realized that, as a society, we need to stop calling formula-feeding lazy. What you feed your baby literally has nothing to do with how hard you work as a parent.

It's hard work no matter how you feed your baby.

It should come as a shock to literally no one that being a new mom is hard work. Period. Still, I don't understand why some people think the way you choose to or end up having to feed your baby has anything to do with how lazy or hard-working you are. Does this mean that dads, LGBTQ parents, grandparents, sexual assault survivors, people taking medications that aren't compatible with breastfeeding, cancer survivors, adoptive parents, foster parents, and people with undersupply are all inherently lazy? That's ridiculous, and not to mention a pretty hefty dose of painfully "lazy" logic, if you ask me.

Calling formula-feeding parents lazy is also pretty laughable, especially when you think about the extra things they have to do, including, but certainly not limited to: buying formula, mixing bottles, remembering bottles and formula when you leave the house, getting out of bed in the middle of the night (or remembering to mix bottles and storing them safely by the bed until you need them), remembering to buy more formula when you start to run low, and constantly cleaning bottles. Don't get me wrong, I've come to love formula-feeding, but it's not easy all of the time.

Now, I am not in any way implying that breastfeeding isn't hard, too. Rather, I'm simply saying it's all hard. I've breastfed, formula-fed, and combo-fed my babies, and you know what? It's hard work no matter how you feed your baby. Contrary to popular belief, formula-feeding parents still have to wake up to feed their babies. They still have to put in time, effort, and planning into each meal. They still have to deal with judgment and shame, just like breastfeeding mothers. Our "to do" list is just as long as any breastfeeding mother; we just have to buy more bottles and fewer nursing bras.

So, how did people like me get the wrong idea about formula-feeding parents? In my opinion, it has to do with the tendency for our culture to expect new moms to martyr themselves, and give up everything to provide what's best for their babies. Since parents hear and see "breast is best" everywhere, from the doctor's office to the freaking can of formula, breastfeeding has become part of the way to be a "good mom."

In an effort to validate their feelings, certain people tell themselves people who do things differently are not as tough, strong, or hardworking, than they are.

Then there's the fact that breastfeeding can be freaking hard, so when parents are able to breastfeed they are proud of themselves (and rightfully so). There can be challenges — sore nipples, undersupply, poor latch, mastitis, thrush, nursing strikes, etc. — that make breastfeeding seem pretty terrible at the time, but can make you feel like a rock star when you overcome them. I wanted to breastfeed so badly that I nearly killed myself trying, all because I was chasing that feeling of overcoming a monumental breastfeeding challenge.

Unfortunately, for some people feeling good about themselves means putting other people down. In an effort to validate their feelings, certain people tell themselves people who do things differently are not as tough, strong, or hardworking, than they are. That's not true at all. When you formula- feed, you have to find the right formula, buy it, and make bottles. When you breastfeed, you have to learn how and work through challenges and barriers. Both are hard. Parenthood is not a competition.

After eight plus years of parenthood, I've finally realized that being a good parent has literally nothing to do with how or what you feed your baby.

Besides, life is relative. You have no idea how hard someone works to feed their babies or what they have or haven't tried. If you aren't in their body, you don't get a say, and you can't possibly understand their perspective. You guys, my partner and I went through five different formulas before we found one that worked for our son. He experienced weeks of weight loss and tummy troubles, and it was nothing short of terrifying. Plus, it was so frustrating to buy yet another formula and discover that he couldn't eat it. In the meantime, I was still breastfeeding and getting up in the middle of the night to power pump. I know, I'm so lazy, right? We ended up using a hypoallergenic formula, which is super expensive, but the only thing we tried that didn't give our newborn son horrible diarrhea or constipation.

It's time to stop calling each other names. After eight plus years of parenthood, I've finally realized that being a good parent has literally nothing to do with how or what you feed your baby. All parents try to give their babies what they need, and it's hard enough without being subjected to name calling and sanctimonious parents who truly believe their way is it the only way. Perhaps it could be easier if we all just supported each other. Just a thought, from one "lazy" formula-feeding mom to the next.

More Like This
Here’s What You Need To Know About That Viral 1960s Baby Formula “Recipe”
How A Recall Of Contaminated Formula Made The Formula Shortage Crisis So Much Worse
Gov. Abbott & Other Republicans Condemned President Biden For Feeding Immigrant Babies
Gerber's New Spokesbaby Isa Has The Biggest Brown Eyes & Was Born With A Limb Difference