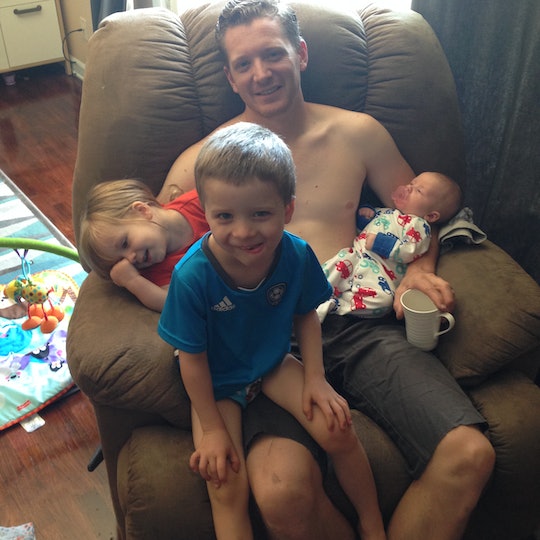 My husband and I talked and talked and talked about whether or not we were done having kids after our third child was born. I wanted a yes or no answer. I needed certainty so I could move forward with my life. How do you know when you’re done having kids? Everyone told me, “You just know.” After six months and much debate, we decided that we felt done. We knew. It didn’t feel like anyone was missing in our family. Our third son was that missing puzzle piece that finally made us feel whole.

So together we decided it was time for my husband to get a vasectomy. We considered natural family planning with a fertility monitor, but they were insanely expensive and the vasectomy was fully covered under our insurance. The vasectomy also came with the peace of mind that we wouldn’t make the rash decision to have a baby on a whim — you know, when we have one of those blissful family days where everything falls perfectly into place and all the kids are sleeping at just the right fertile moment.

I know how easy it is for me to fall prey to my own emotions when it comes to babies, so I knew a vasectomy was the only way for us. I can’t handle hormonal birth control (not to mention I got pregnant when I switched from the shot to the pill), and getting a copper IUD struck an uncomfortable moral chord with me. When all our options were spread out in front of us, we both felt most comfortable with the vasectomy. It was the right choice.

When I came to the final page, however, I couldn’t even pick up the pen to write my signature.

Once the appointment for the consult was on our calendar, I felt a rush of relief. The decision was final. It was really happening. We were done having kids. I felt good about it.

I could talk and rationalize our choice to be done having kids all day long, but when the vasectomy consent form was right in front of me, it became too real.

Then the paperwork arrived in the mail, with all the details of the procedure and some forms that needed to be signed. One for my husband, and one for me. He set the paperwork in front of me and I looked over all the information. It was pretty straightforward, and exactly what I expected. When I came to the final page, however, I couldn’t even pick up the pen to write my signature.

It was late, and the baby had been sleeping in my arms, and everything was peaceful. It was the kind of moment when I didn’t feel so sure about being done. At least not on the surface. I decided to wait until the kids were having another meltdown day. Certainly then I could lend my signature to the document that would ensure no more babies would ever sneak their way into my womb, only to wind up screaming on my kitchen floor over marshmallows a few short years later.

It only took a few days for one of those terrible, tantrum-filled afternoons to happen yet again. I took down the paperwork and opened to the page that required my signature, but even while my 2 year old wailed and woke the baby, I still couldn’t do it.

Even in the midst of the screaming and the crying — in the incredibly exhausting and hellish parts of motherhood — I realized there was nothing I would ever love better than raising my babies.

I could talk and rationalize our choice to be done having kids all day long, but when the vasectomy consent form was right in front of me, it became too real. It would be final. There would be no turning back or second chances. Even though my partner could choose to get a vasectomy reversal (known as a vasovasostomy), according to WebMD the chances of a vasectomy reversal success depend on how much time elapses between the vasectomy and then the reversal. It was already enough to decide on one surgery, let alone a costly second (and unnecessary) procedure. Suddenly, I was not so sure at all. Even in the midst of the screaming and the crying — in the incredibly exhausting and hellish parts of motherhood — I realized there was nothing I would ever love better than raising my babies.

I called my husband and told him that our children were being monsters and rehashed the wretched details of each tantrum. He asked me if I had signed the consent forms, and I told him no. He knew the words that were coming next. He probably knew this would happen all along. "I’m not ready yet," I said. I’m not sure I ever will be.

He told me it was fine. We would wait until I was ready. Another year, or two, or three. We'll do it sometime. He wants to be done having kids, and so do I. He feels like our family is complete, and so do I. You'll be ready soon, I tell myself. But will I? A part of me thinks yes, it's true, but then some part of me wants more.

More Like This
I’m A Newly Single Mom. How Do I Get Over My Body Insecurity?
How Hot Is Too Hot For Babies? Experts Weigh In
Can You Have Sex With Placenta Previa? Experts Explain
Here's Why You Should Avoid Oral Sex If You Have Placenta Previa